The mother of the 13-year-old autistic boy whose arm was allegedly broken by a school staffer said that the incident happened in a room, known as the ‘crisis room,’ an area children go to calm down when upset, and said the room, has no cameras.

But, the Robert E. Peary school in Ridgewood, Queens insists that the injury the boy sustained happened during a fall in the school hallway.

The boy’s mother, Joan Aslarona told DailyMail.com, that once doctors at Mount Sinai Queens examined her son’s injury, they told her it could not be from a fall in the school’s hallway, as the school was claiming, and then they called the authorities.

The boy was later transferred to Mount Sinai Hospital in Manhattan to be treated by a pediatric orthopedist. According to the X-ray obtained by DailyMail.com, the bones in the boy’s left arm was badly displaced and two of the bones were sheared.

Aslarona said that when the school learned of her son’s severe injury, they changed their story again, saying that ‘he fell after being hit by a pole in the school’s hallway.’

In a photo provided to the Daily Mail, Joan Aslarona’s son is seen with his left arm in a cast and sling after an incident at his Queens public school where he said a staffer broke his arm 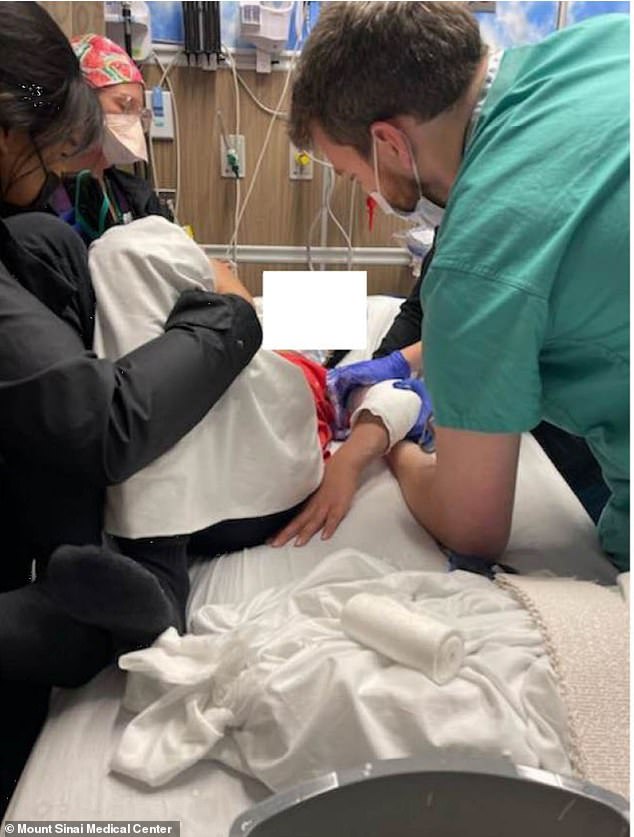 The boy was taken to Mount Sinai Queens Hospital and Aslarona said that is when she was informed by the doctor that her son arm’s was not broken from a fall in the hallway, as the school claimed. ‘The doctor was very upset and called the authorities,’ she said 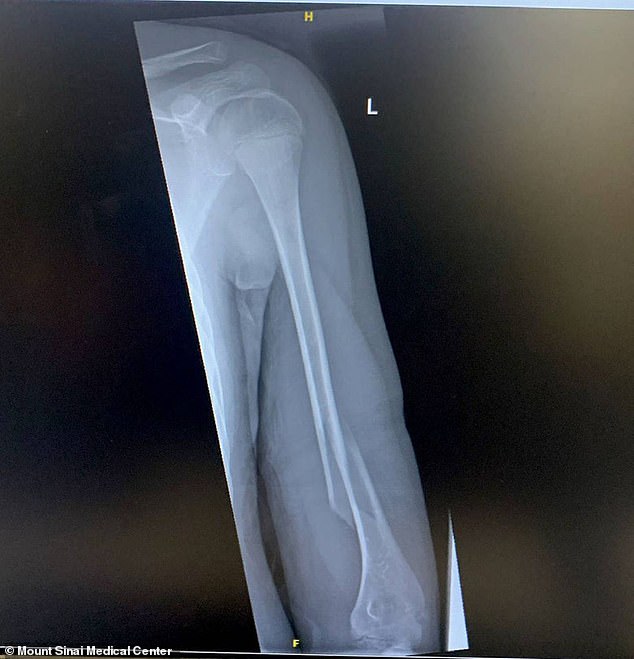 The X-ray that shows the injury of the bone that was sheared in two different areas in the boy’s  left arm. The boy’s mother said her son is left-handed and was unable to use his hand for months 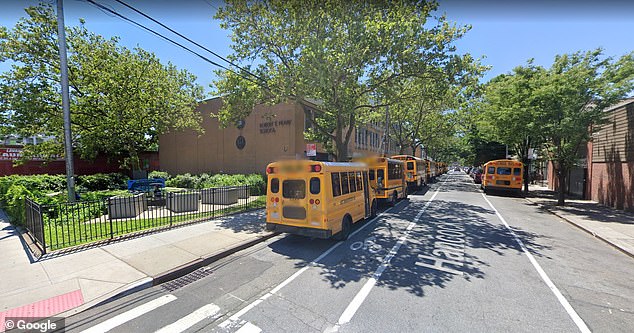 ‘I am devastated. This is my son’s second home and is his safe place,’ Aslarona said. ‘I am shocked this happened by an adult.’

Aslarona is filing a civil rights claim in Queens Superior Court against the individual paraprofessional for deprivation of her son’s rights and the Department of Education,’ family’s Attorney Andrew Carboy told DailyMail.com.

‘In our investigation, we have learned that it is difficult to obtain any information from the Department of Education. As you see, the DOE will not even share basic details, such as the name of the staff member, with the family. The school would not even meet with the family,’ Carboy said.

He added: ‘Ms. Aslarona decision to file this application was forced by this stonewalling.’

Aslarona shared the horror her son endured at the hands of a staff member at the Robert E. Peary school in Ridgewood, Queens April 7,  2022.

He was then taken into the school’s crisis room by the paraprofessional, a room children go to calm them down when they get upset. But, the room has no cameras, and that was when she believes her son was injured. 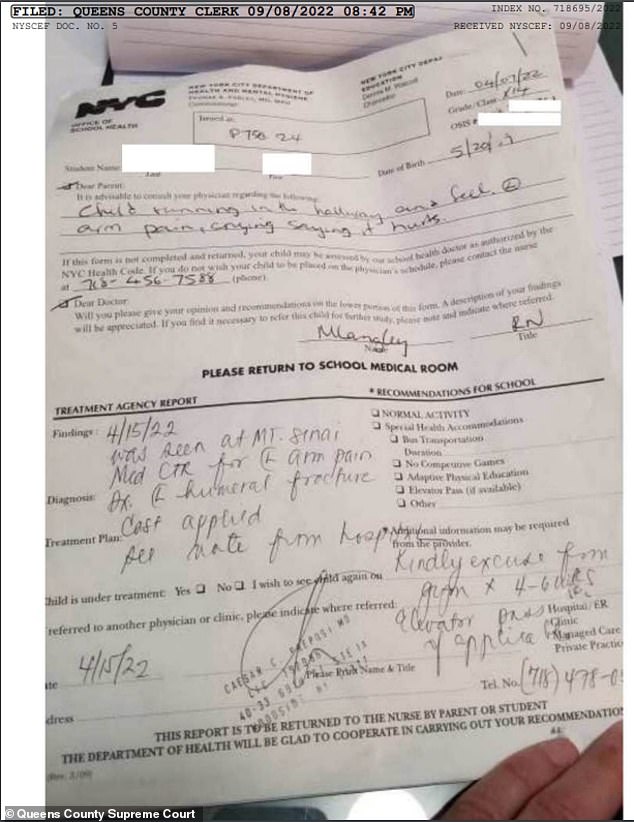 A picture of the accident report where the Robert E. Peary school claimed that the autistic child suffered an arm injury running in the hallway 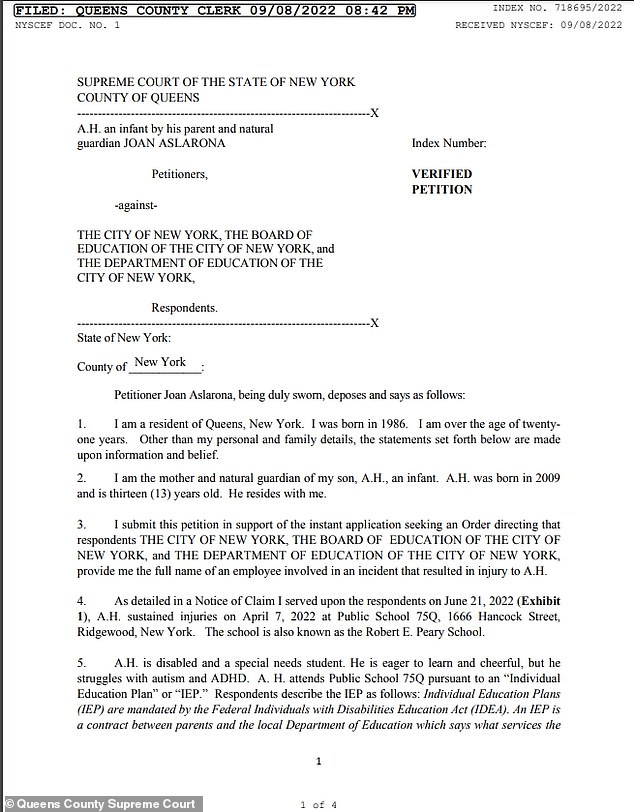 Aslarona said her son suffers from autism with ADHD and is high-functioning.

District 75 where he attends has many children who are non-verbal, but she told DailyMail.com that her son can speak –something that he has been able to do since he was very young.

‘Many students are not able to communicate but my son is more verbal. He told us the story of what happened and his story hasn’t changed.’

‘My son is not a liar,’ she said. ‘It is going to be my son’s words against the adults.’

After the school called Aslarona, the grandmother rushed her grandson to Queens Mount Sinai hospital, and she left her job and rushed over to the hospital.

‘The doctor said his arm was badly displaced and sheared in two places and his injury wasn’t from a fall in the hallway. The doctor was very upset and told me she was calling the authorities.’

Aslarona said that once the school learned that her son’s arm was fractured the school changed their story again, and said that ‘he fell in the hallway and hit a pole.’

‘My son is very charismatic, fun-loving, high energy and smiles all the time. Since the accident he isn’t the same boy,’ she said.

Two weeks after the incident, he returned to the school but was scared to go back and then was terrified when he saw the paraprofessional that allegedly injured him.

‘He is still working at the school my son sees him,’ she said.

The family’s attorney said that they are in the process of filing a Notice of Claim and obtain the name of the staff member and sent DailyMail.com the affirmation that was filed in Queens Superior Court.

‘We have taken the extraordinary step of seeking a court order to identify, by full first and last name, the staff member involved,’ Carboy said. ‘Ordinarily, this information would not be a secret. We cannot understand why it is being hidden, here.’

He said that family initially did not want to file suit but finally made the decision based on the school’s lack of cooperation.

Aslarona said that her son has been a student at the school since first grade and had never had any issues before with any of the teachers or the paraprofessionals. She didn’t want to move him out of the school because this is his last year at the school.

She added:  ‘Worse, to date, personnel of respondents have refused to identify the complete name of the paraprofessional, notwithstanding my requests to both the principal’s office and the child’s regular teacher,’ she said, in part.

In September, her son started the eight grade and will be graduating in the spring before heading to high school.

‘I told the school I am not moving him. I told them to remove the staff member immediately,’ she said.

On September 8, the first day of school, when she discovered the para professional was still at the school she was saddened and outraged.

She said when she asked her son how his first day of school was, her son said: ‘He [the paraprofessional] is there with a kid he is not hurting.’

The family’s attorney told DailyMail.com that this should not have happened ‘under any circumstances and said the ‘DOE is a very difficult organization to get information from.’

‘As you can see the parent of an injured child cannot even get basic information about what happened to her own son,’ Carboy said. ‘The goal of his public education is to help Joan’s son live with his disability and be part of society and the way the school treated him was as if he wasn’t a member of society.’