Monkeypox infections in New York City are overwhelmingly being found in men – with more than half of cases being detected among lesbian, gay, bisexual or queer people as well.

Officials in the Big Apple revealed the first snapshot of the demographics of people that have been infected with the tropical virus.

Of the 336 cases in the city – the most of any singular locality in America – 321 are among men, with no confirmed cases among women. The remaining five percent of cases are split between transgender persons and cases where the gender is unknown.

Transgender people were not included with the LGBQ community in the data.

The virus has famously erupted among communities of gay and bisexual men across the world in recent months after first being detected in Europe, and this data confirms that the community is being hammered by the virus in New York as well.

In total, over 11,000 cases have been detected in nations where the virus is not endemic as part of this outbreak – including 1,470 in the U.S.

According to data from NYC Health, every single person with a confirmed infection in the city is between the ages of 20 and 69, with a media age of 35.

The virus has overwhelmingly hurt males in the city. Nearly every case has been confirmed in a male – which would make sense considering the sexual networks where the virus has so far traveled.

While no cases have been confirmed among women yet, there are still eight cases where the gender of the person was not recorded.

Straight people have largely avoided the virus as well, with only two confirmed cases among the group.

Around 60 percent of confirmed cases are in the LGBQ community. Transgender individuals were not included with this group.

The sexuality of the infected person was unknown in 40 percent of cases. 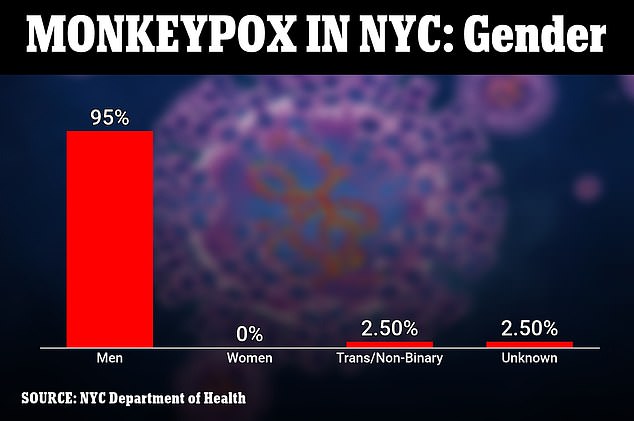 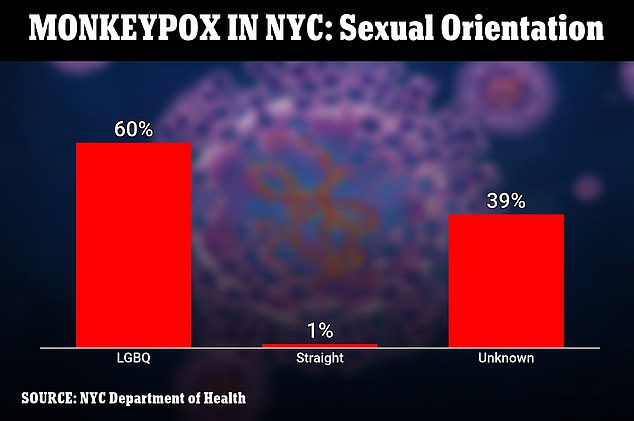 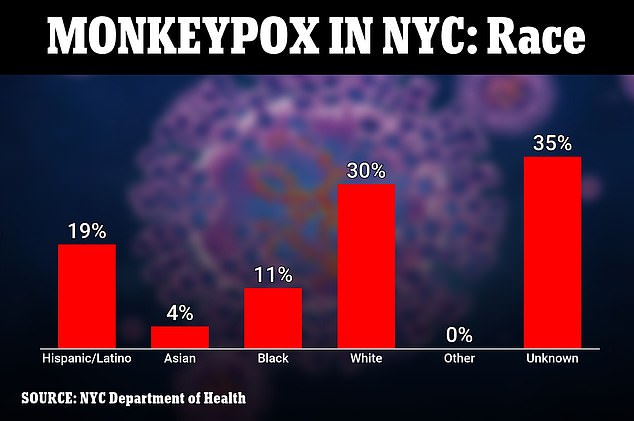 Monkeypox has spread across racial groups, though. Around one-in-three cases are among white people, with one-in-five found in the Hispanic community.

These figures are likely significant undercounts, though, as officials at the Centers for Disease Control and Prevention have been panned for failing to control the virus.

Monkeypox has been allowed to spread undetected because of failures in America’s testing and surveillance infrastructure – similar to how Covid was allowed to spread so widely early on when it caught the world off guard in early 2020.

Unlike Covid, though, monkeypox is not novel, leaving experts frustrated with how top officials failed to deal with a threat they were already knowledgeable to.

‘Why is it so hard for something that’s even a known pathogen?’ Dr Anne Rimoin, an epidemiologist at UCLA said to the New York Times.

‘How many more times do we have to go through this?’

America’s monkeypox response has been marred by a fractured and limited testing system and limited access to vaccines that could help Americans get ahead of infection.

Dozens of people lined up for vaccines against monkeypox in New York City Friday as the city launched its second jabbing drive.

The queue — formed mostly of men — snaked around the side of the Chelsea sexual health clinic in Manhattan this morning.

Gay or bisexual men who have multiple sexual partners over two weeks are again being offered the jab in America’s monkeypox capital, alongside anyone exposed to a patient with the tropical disease.

But the 2,500 appointments available for the jabs ran out within minutes yesterday, as thousands hurried to grab a slot.

Health officials were slammed for a ‘technical glitch’ which allowed so many people to book slots early using an old link that by the time the first batch was released it was already full, leaving frustrated New Yorkers saying they were left with ‘zero chance’ of getting a jab.

At a press briefing last week the city’s health commissioner Dr Ashwin Vasan said the locations had been chosen because three-quarters of cases were in Manhattan.

This included about a third in the Chelsea and Hell’s Kitchen neighborhoods specifically.

The Health Department is primarily using Twitter to tell people when jabs are available, leaving those who are not regularly on the application in the lurch.

On Wednesday it revealed another 6,000 doses had arrived from the federal Government.

At first, when a person was feeling symptoms of the virus they would be tested locally for the orthopox family of viruses.

If positive, their sample would need to be sent to the CDC for confirmation – a process that could take days.

This meant that even working as fast as possible, case figures in the U.S. were always going to be days behind.

Some of those testing gaps have since been filled, with the CDC announcing in recent days that both Labcorp and the Mayo Clinic had been enlisted in expanding testing capacity.

Still, though, access to monkeypox testing is extremely limited and sparse in a nation of over 330 million people.

‘It’s pretty clear that we need to rapidly scale up the ability to diagnose this now,’ said Dr Jay Varma, a Cornell University public health expert who advised the New York City’s mayor’s office during the COVID-19 pandemic.

Some experts are comparing this shortage of testing to where America was early on in the Covid pandemic.

One significant difference is that the scientific community had no idea what Covid was when it fist emerged, and how to diagnose it was still unclear.

With a virus like monkeypox, which is endemic in some parts of the world and occasionally pops up in the United States, experts believe the same mistakes should not have been repeated again.

‘We clearly identified this as a major mistake that allowed Covid to get its footprint in the U.S. and spread undetected for a month, without any of us knowing… and now we’re just doing the same thing all over again, because that’s the way it’s done,’ Dr Angela Rasmussen, a public health expert at Canada’s University of Saskatchewan told the Times.

The rolling out of vaccines has been spotty as well. American officials are believed to have around 800,000 doses of the two-shot Jynneos vaccine – a figure that may not be nearly enough.

When vaccines have become available, supply has not been able to meet demand. In New York City – the nation’s virus hotspot – walk-in events to receive the jabs often reach maximum demand within minutes of opening.

These failures to properly track and prevent spread of the virus has many experts fearing that the virus will become endemic in the U.S., as it has in parts of West and Central Africa.