New York City Mayor-elect Eric Adams said on Sunday he is keen to end the mask mandate in schools, so long as it can be done ‘safely,’ and declared himself a ‘conservative’ on serious crime.

In an interview with CNN’s Dana Bash, Adams said he wants to nix the mask mandate by the end of the school year.

He said he fears masks are stopping students from making friends, and said he would like to end the mandate as soon as he takes office on January 1, the New York Post reports.

‘If we can find a safe way to do it, I look forward to getting rid of the mask,’ Adams said on CNN’s State of the Union Sunday morning.

‘Part of the socialization of a child is that smile,’ he noted. ‘Not being able to see the smiles of our children has a major impact.

‘But it must be done with the science, so we don’t go back to closing our city down.’

Mayor-elect Eric Adams said in an interview with CNN on Sunday that he would like to eliminate the city’s mask mandate for school children. He is seen here stopping for lunch to try a vegan sandwich by Plantega at Marinello’s Gourmet Deli in Brooklyn on November 3 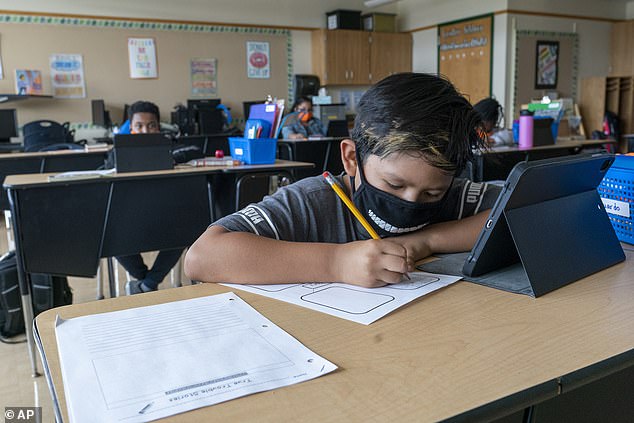 He said he fears masks are stopping students from making friends

Adams also says he’s keen to teach New York children about Bitcoin and cryptocurrency, days after saying he’d take his first three months salary in Bitcoin, as he attempts to make the Big Apple the crypto capital of the world.

The mayor-elect went on to share some advice for his fellow Democrats, following his win last Tuesday, as Democrats throughout the country lost their seats to Republican challengers.

Adams said Democrats need to focus on practical goals to avoid further losses, and cited the passage of the $1 trillion infrastructure bill on Friday as an illustration of what Democrats can do to tackle problems, according to the New York Daily News.

‘We should be known for what we did – the infrastructure bill,’ he said, noting: ‘Public safety is really a real problem,’ and ‘we need to get back to basics.’

And speaking on NPR’s Weekend Edition, the mayor-elect noted that he will be ‘conservative’ on crime.

‘I think its imperative that as a city and a country, we understand that public safety and justice – they are the prerequisites to prosperity,’ he said, noting that he identifies as a ‘conservative’ on public safety.

‘I am conservative on public safety when you see 13-year-old children in our schools stabbed in libraries and a woman was shot while walking down the block with a baby in a carriage,’ he said, referring to a 26-year-old woman who was struck by a stray bullet while pushing her 2-year-old daughter in a stroller in the Bronx on Thursday.

‘When I use the term “conservative,” I have zero tolerance for abusive and criminal and violent behavior,’ Adams explained.

‘I don’t believe people who discharge guns on Monday should be out of jail on Tuesday, the next day – that’s not acceptable.

‘I know what we need to stop the abusiveness of law enforcement, but at the same time, get the safety we deserve.’ 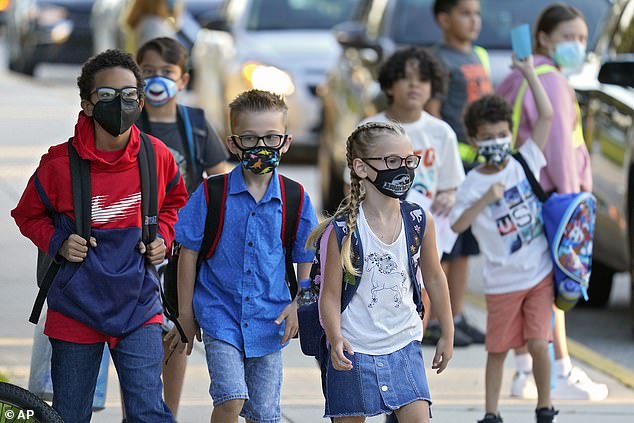 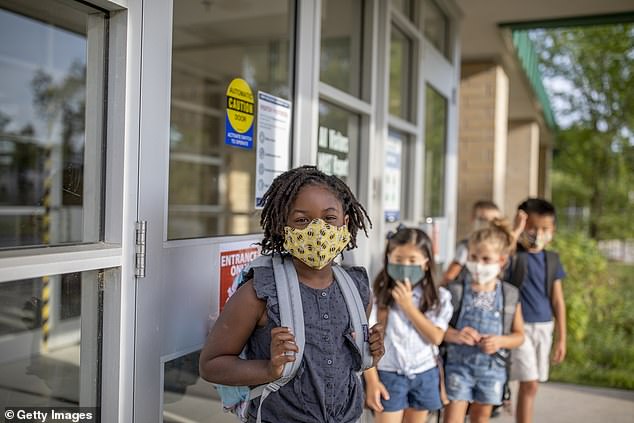 Adams’s appearance on the Sunday morning shows come less than one week since he was elected to lead the city’s recovery following the COVID-19 pandemic, which has killed more than 34,000 residents and closed hundreds of thousands of businesses.

As mayor for more than eight million people, he will also oversee America’s largest municipal budget, crippled by the COVID-19 crisis, and its biggest police force and public school system.

Since last year, the city has had a mask mandate in effect for all of its more than 1 million public school students, with students forced to wear them at all times unless they’re eating or drinking.

City officials have said they are not sure when the mandate can be removed, even as children ages five to 11 are now eligible for the Pfizer-BioNTech vaccine, following the Center for Disease Control’s approval of it last week.

Dr. Jay Varma, the mayor’s top health advisor, added that city officials have not yet determined what percentage of students would need to be vaccinated against COVID in order to make the mandate no longer necessary.

‘We’re really not at a point right now to say that, at any given percentage of vaccinations, that all of our current mitigation measures could be removed,’ he said at a news conference on Thursday.

‘But I would also say, as an everyday person, I look forward to the day when we don’t need them.

‘We just need to make sure we’re absolutely certain that’s the right moment.’ 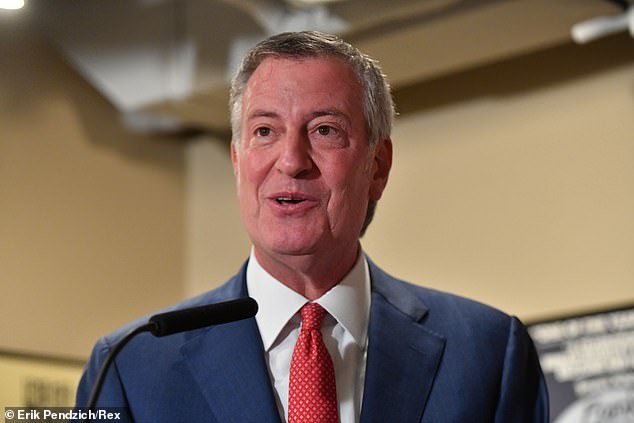 In a press briefing last week, outgoing Mayor Bill de Blasio touted a small decrease in the murder rate as he claimed he has been successful in reducing crime

Meanwhile, the city has been crippled by increasing crime.

According to the NYPD’s latest monthly numbers, overall crime was up 11.2 percent last month compared with October 2020. Robbery was up by 15.8 percent and felony assault rose by 13.8 percent.

The outgoing mayor, however, touted a small decrease in the murder rate while ignoring an 11 percent jump in overall crime in a news conference last week, claiming he has been successful in reducing crime.

De Blasio focused in the drop in murders last month to 37, compared with 41 in October 2020, saying the minor reduction of 9.8 percent ‘says a lot.’

The spike in overall lawlessness comes as the city grapples with an increase in visible, violent crime, including horrific subway and street attacks that have left New Yorkers terrified.

Last Monday at around 10pm, a man wearing a grinning mask inspired by the film The Purge attacked a stranger on the street with an ax. The 51-year-old victim was taken to a nearby hospital with a deep cut in his arm.

And on October 30, a man threw a Molotov cocktail into a Brooklyn bodega after an argument with employees. The workers escaped as the arsonist was about to throw a second one, but he was stopped by a witness. 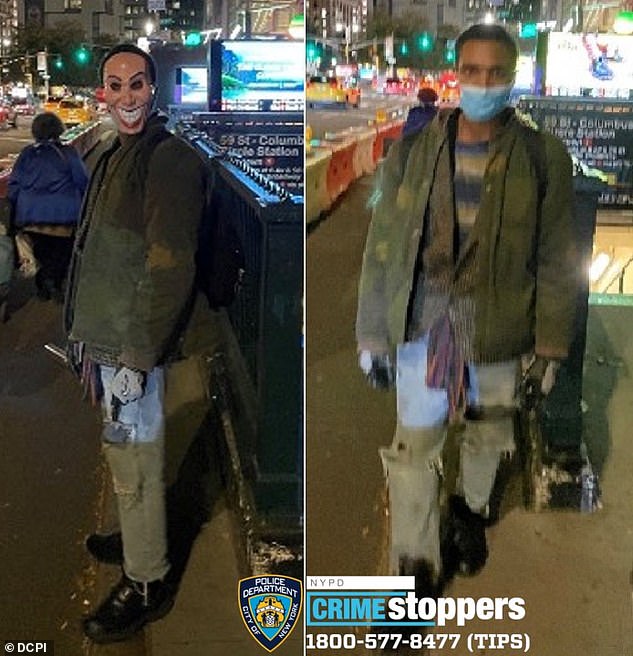 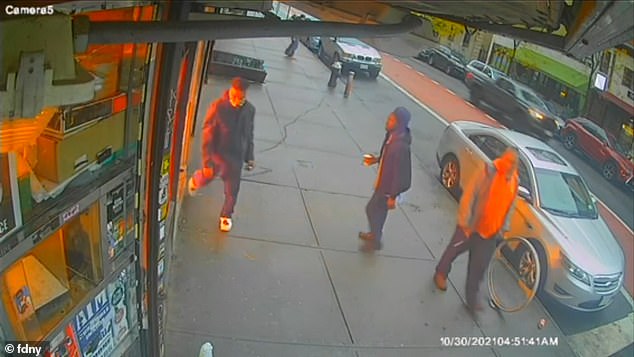 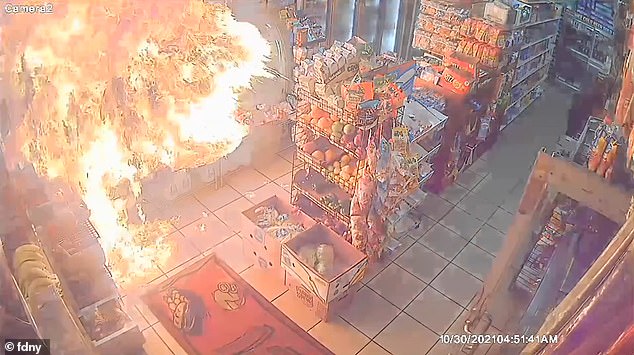 Despite the shocking scene, only one person was hurt with non-life-threatening injuries 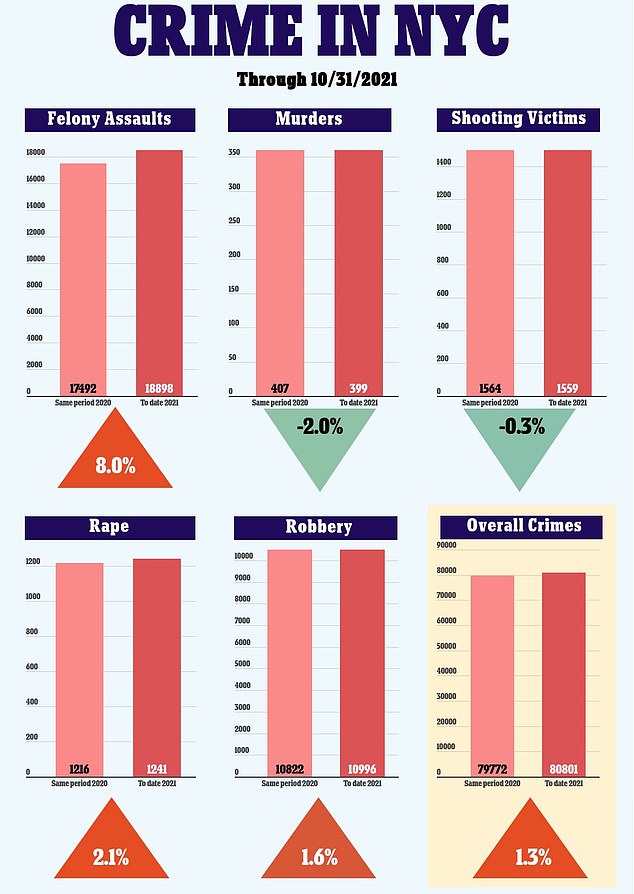 While murders and shootings were down in October, assaults, rape and robbery increased

De Blasio also said shootings are down in Queens and Staten Island compared to last year, and emphasized the decline in shootings in Brooklyn, which are down 20 percent from last year.

‘This is crucial. This is a big story in Brooklyn. The reality bares witness that there have been amazing efforts made even in the toughest of times by the NYPD.’

Shootings, however, continue to climb in other parts of the city.

‘The Bronx is still a challenge – lots of resources being poured in to address Manhattan North as well,’ the mayor admitted.

De Blasio said shootings were down in other boroughs thanks to community and precision policing, which depend on deep ties with the community, according to the Manhattan Institute.

‘We’ve got to get the public more involved. We need people at the community levels to join those “Build the Block” meetings to get involved. Every New Yorker has information they can offer to the police that can be helpful to them,’ he said.