The crowd at the 24-hour Global Citizen Live broadcast event was set on showing de Blasio that he was not welcomed at the event, which had celebrities such as Harry and Meghan, J-Lo, Coldplay and Lizzo in attendance.

A little over a month ago, de Blasio sparked the same reaction from attendees who were celebrating the city coming back to life after the pandemic at the Homecoming Concert in Central Park.

The Homecoming concert was dramatically cancelled half way through, and revelers were told to leave Central Park immediately and seek shelter as Hurricane Henri barreled down on the city.

De Blasio and NYC officials had ignored a tropical storm watch for the Big Apple ahead of the concert.

And despite blazing sunshine on Saturday for the Global Citizen concert, the crowd were just as unforgiving of the mayor.

In contrast, Senate Majority Leader Chuck Schumer was cheered by an enthusiastic crowd as he talked about laws congress could work on to fight climate change. 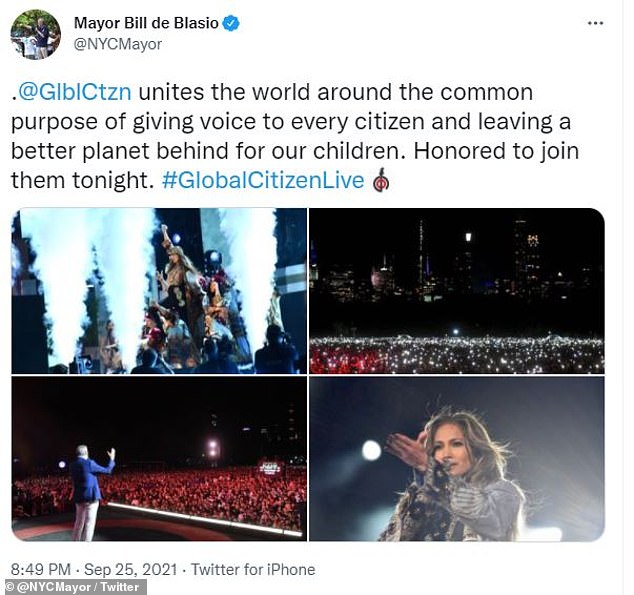 De Blasio chose to ignore the backlash and gave props to the event on Twitter.

‘@GlblCtzn unites the world around the common purpose of giving voice to every citizen and leaving a better planet behind for our children. Honored to join them tonight. #GlobalCitizenLive,’ the mayor wrote.

However, people didn’t let him forget that he wasn’t warmly welcomed at the festival in the reactions.

He also received criticism for his appearances at the star-studded event and at the World Trade Center Observatory with Meghan and Harry, while only reluctantly agreeing to visit crisis-hit Rikers Island prison.

It is the first time since 2017 that de Blasio will visit the under-staffed, over-crowded jail, where 11 people have died the last year, inmates reportedly use communal bags as a toilets and are denied meals, medication, and transportation to court.

One user wrote: ‘You can make appearances with Harry & Megan, go to concerts like this….but no time to address the mounting deaths and dysfunction at Rikers until next week. Mmmk.’

He also received criticism for appearing at the star-studded event while reticently agreeing to visit Rikers Island after 4 years, as the facility is said to be in dire conditions 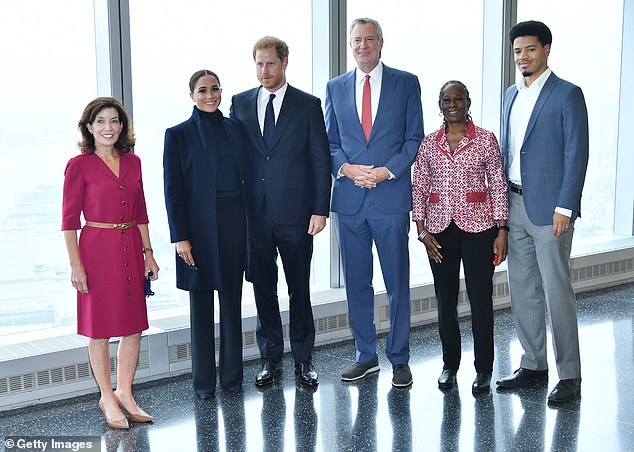 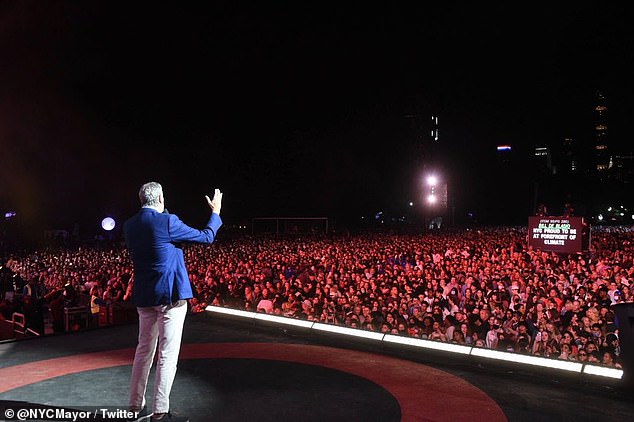 For de Blasio, a mayor with an approval rate of only 37percent, jeers have become the norm

Twitter users also didn’t miss the chance to point out his recent appearance at the $35,000-a-ticket Met Gala with his wife and son.

For de Blasio, a mayor with an approval rate of only 37percent, jeers have become the norm.

On September 6, he was received with outrage from victims of Huracane Ida in a Queens neighborhood, who blamed the Mayor’s Office for not warning New Yorkers promptly about the magnitude of the storm, as 13 lost their lives while basements across the city filled with rain water.

Even at events of a light-hearted nature, like the Nathan’s Hot Dog eating Contest on Independence Day, de Blasio can’t escape the booers. 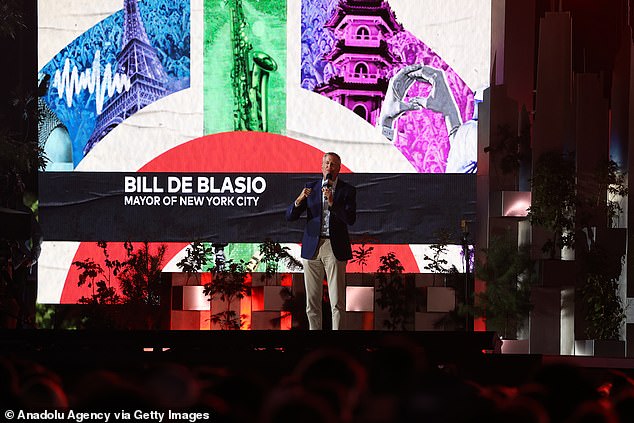 De Blasio, who was re-elected in 2017 and can’t run for a third-term, will go down in history as one of the worst rated mayors of New York City 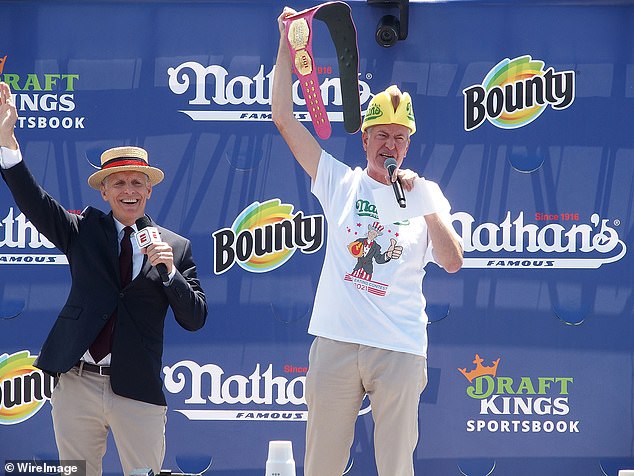 And New Yorkers have also taken to social media to share their disapproval.

About the mayor’s appearance at the Global Citizen Festival, Twitter user David de Trollio said: ‘This ‘Mayor’ has made the city someplace to avoid more than any other time I can recall in my life. A close friend and myself both passed on well paying positions in the city primarily due to safety factors. The Dinkins’ years are almost a pleasant memory compared to now.’

Another user agreed and also compared de Blasio with David Dinkins, the 106th Mayor of New York City from 1990 to 1993, whose administration was seen as too soft at a time when the city was plagued with crime, drugs, riots, racial division and an AIDS epidemic.

‘One of the reasons I left when I did. It’s home and I will miss it every day of my life but as a kid who grew up in 1980’s NYC through the end of the Bloomberg era I knew that we were due for a left wing loon. And we got the worst of all. Worse than Dinkens…’ said @GypsySol77.

De Blasio was re-elected in 2017 and can’t run for a third-term. 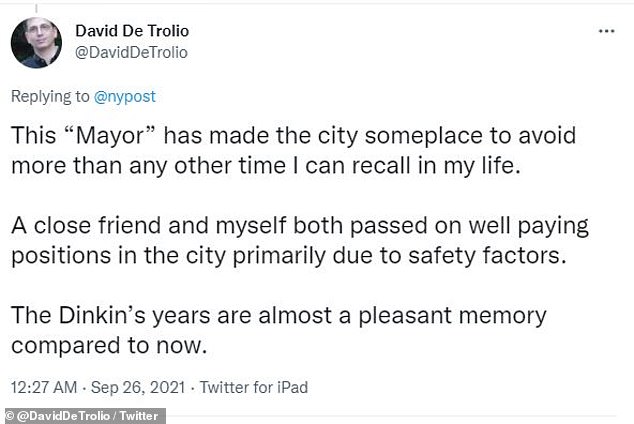 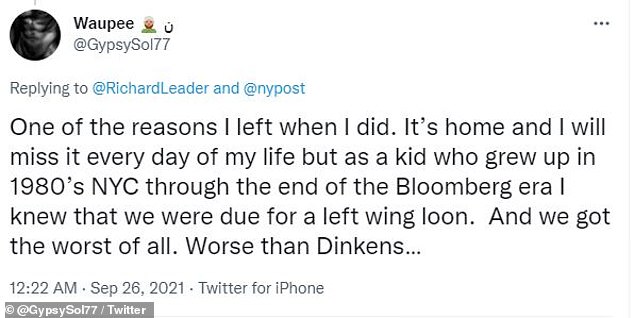 Twitter users compared de Blasio with David Dinkins, whose administration was seen as too soft at a time when the city was plagued with crime, drugs, riots, racial division and an AIDS epidemic