She was originally supposed to begin serving time on September 29.

Mack had been free and living with her parents since April 8, 2019

The prison is somewhat infamous for being the temporary residence of actresses Lori Loughlin and Felicity Huffman for their roles in the college admissions scandal, TMZ said.

She was known for recruiting and directing women to have sex with cult leader Keith Raniere, who himself was sentenced to 120 years in prison. 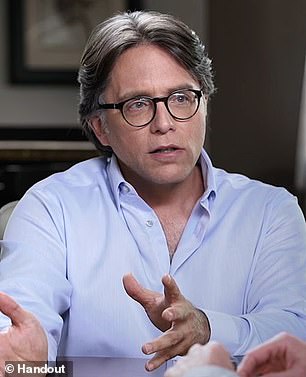 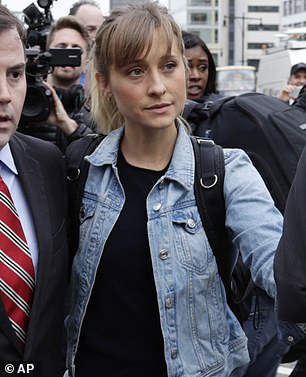 Raniere (left) was sentenced in 2020 to 120 years in prison for his conviction on sex-trafficking charges. Mack (pictured in 2018) had been seeking credit for cooperating against Raniere and taking responsibility for helping him create a secret society of brainwashed women

Mack was with Raniere in Mexico when he was arrested in 2018.

The 38-year-old, who was facing up to 17 years in prison, was sentenced in June in Brooklyn federal court and was ordered to pay a $20,000 fine.

Mack, who is best known for her role as a young Superman’s close friend on the TV series Smallville, had pleaded guilty in 2019. 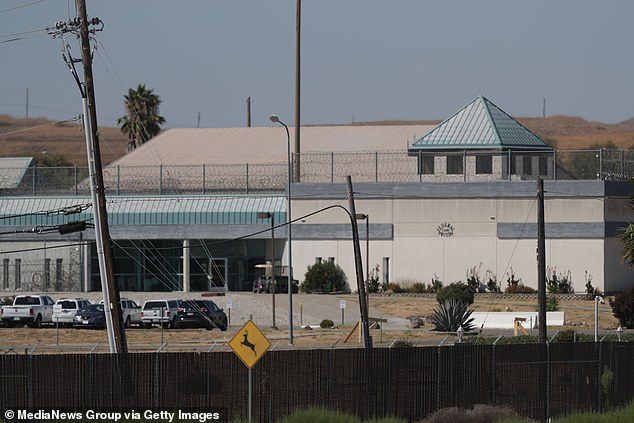 Mack reported to the Federal Correctional Institution in Dublin, California (pictured above) Monday

During the sentencing, Mack denounced Raniere and apologized to her victims, saying: ‘I made choices I will forever regret.’

‘I’m filled with remorse and guilt. I renounced Keith Raniere and all of his teachings. From the deepest part of my soul, I am sorry.’

Facing up to 17 years behind bars, Mack had urged the judge to spare her prison time and instead sentence her to home confinement or probation.

Prosecutors did not request a specific sentence but did say it should be less than the minimum 14 years called for by federal guidelines in light of her ‘substantial assistance’ in the investigation of NXIVM and Raniere.

Mack, who was once part of Raniere’s inner circle, had given them a recording of a conversation she had with Raniere about the branding, which was used to bolster their case against him.

She had also provided information to prosecutors about how he encouraged ‘the use of demeaning and derogatory language, including racial slurs, to humiliate ‘slaves’.’ 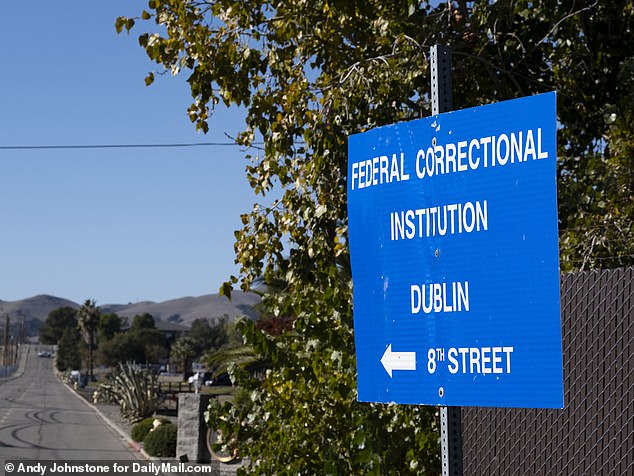 After her three years at FCI Dublin, Mack will spend another three on house arrest

US District Judge Nicholas Garaufis took pity on Mack, saying he believed her apology was sincere but that she deserved a serious sentence for becoming ‘a willing and proactive ally’ of Raniere.

‘In Nxivm language, you are a slave as well as a master. It’s hard to determine a sentence for a defendant who is also her co-conspirator’s victim,’ the judge said.

‘Your punishment should serve as a forceful deterrent and a serious sentence is important, but I don’t doubt that you were also manipulated.’ 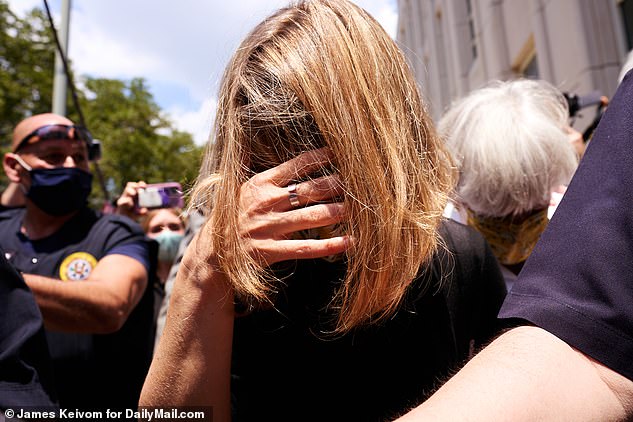 US District Judge Nicholas Garaufis took pity on Mack, saying he believed her apology was sincere

Victim Jessica Joan, who was among the few who appeared in court, rejected Mack’s apology, telling the judge she deserved no mercy.

‘Shine light on who Allison Mack really is. Allison is a predator, a danger to society, and has no remorse for her victims,’ she said.

‘She is the Ghislaine Maxwell to Keith’s Jeffrey Epstein. 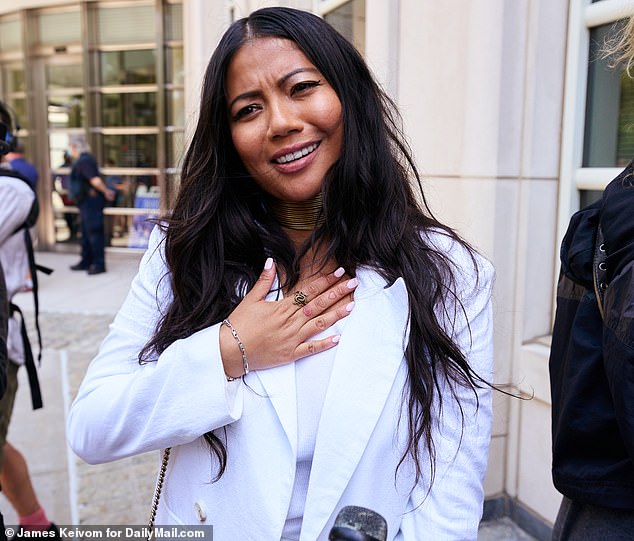 Victim Jessica Joan, who was among the few who appeared in court, rejected Mack’s apology, telling the judge she deserved no mercy

‘She can blame Keith all she wants but she is the menace cut from the same cloth. She sought me out like a predator stalking her prey… Allison Mack and Keith Raniere are the most evil monsters I’ve ever met.’

India Oxenberg, the daughter of Dynasty actress Catherine Oxenberg, told the Hollywood Reporter she was in a state of ‘disbelief’ over the sentencing.

Oxenberg was recruited to NXIVM by Mack and says she was among the first to be branded. 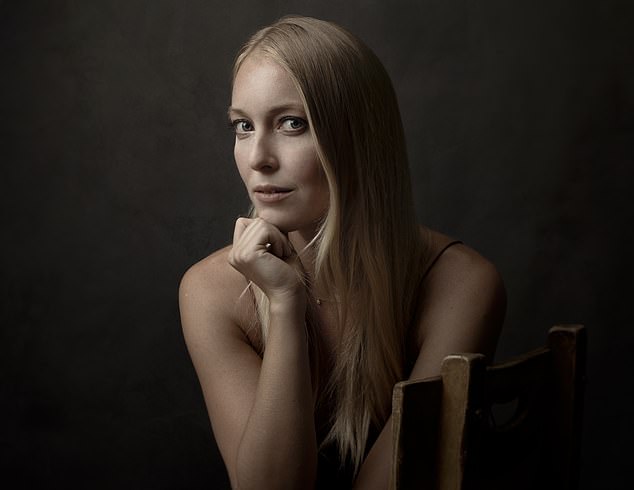 ‘I’m still in a state of disbelief, but I trust and honor the judge’s decision,’ she said.

‘I hope that her victims, including myself, feel vindicated and safer, given that she has denounced Keith Raniere. We all need time to process and digest everything. This is a big moment for all of us.’

Mack, who has been out on bail with an ankle monitor since her arrest, has until September 29 to surrender to authorities. Her defense attorney had requested the judge recommend a prison in her home state of California. 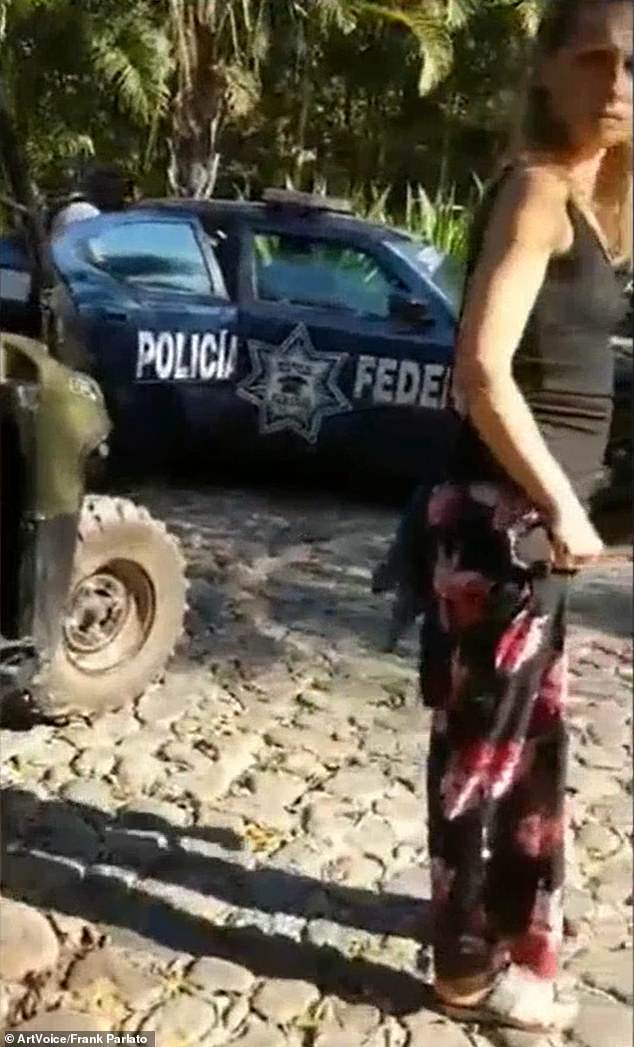 As an investigation into NXIVM was underway in 2017, Raniere and Mack were among those who fled to Mexico to try to reconstitute the group there. He was arrested at a luxury villa in Puerto Vallarta and sent back to the US in March 2018. Mack is pictured above during Raniere’s arrest. She was arrested after arriving back in New York several days later. Image courtesy of ArtVoice

Former members testified at Raniere’s trial that he established a secret sorority within NXIVM in about 2015 in which women were kept on starvation diets, branded with his initials and, in some cases, ordered to have sex with him.

Leaders of the group who were known as ‘slave masters’, including Mack, were said to use nude photos and other compromising materials to blackmail members into complying.

Mack admitted that she coerced two women, who have not been named publicly, into doing work for the group by threatening to release damaging information about them.

She was arrested in 2018 after fleeing with Raniere to Mexico when federal authorities started investigating the cult.

Raniere was sentenced last year to 120 years in prison for his conviction on sex-trafficking charges.

Mack was one of five female members who were charged for their involvement and all pleaded guilty.

Only one other member, Seagram heiress Clare Bronfman, has been sentenced in the NXIVM case so far. She was jailed for 81 months last September after being accused of bankrolling the group.

Raniere has claimed his women followers chose to be branded with his initials as an ‘honorary thing’ and a ‘tribute’ which made him feel ‘almost embarrassed’ in his first interview since being jailed for 120 years.

Raniere, 60, told Dateline that he ‘didn’t come up with’ the idea to carve with a cauterizing pen his initials K.A.R. above the bikini lines of the members of the secret master-slave group DOS.

The cult leader, dubbed ‘Vanguard’ within his inner circle, also claimed he is ‘against tattooing’ but insisted if it was Albert Einstein or Brad Pitt’s initials ‘no one would care’.

Raniere, was speaking via phone from the maximum security federal penitentiary in Tucson, Arizona, where he is serving 120 years for turning cult followers into sex slaves and sexually abusing a 15-year-old.

NXIVM started out as a purported self-help group in Albany, New York, in the 1990s, offering personal improvement and professional development training programs.

Raniere then formed Dominus Obsequious Sororium (DOS) – a secret master/slave club where women were branded, turned into his sex slaves, made to live off just 500 calories a day and forced to make a lifetime vow to obey their ‘masters’.

Raniere was convicted in 2019 on charges that included sex trafficking, forced labor conspiracy, human trafficking and multiple counts of racketeering – including sexual exploitation of a child, possession of child pornography, extortion and identity theft.

The cult leader denied ordering the branding of his cult followers, despite audio played during his trial revealing him planning the ceremonies with cult member and his alleged second-in-command Mack.