The proportion of severely ill Covid-19 patients needing to be hooked up to ventilators has more than halved since the peak of the pandemic in the spring, figures reveal.

Twenty-six per cent of intensive care patients received invasive ventilation up to 24 hours after being admitted to hospital last month.

But this figure was as high as 76 per cent when the pandemic first struck, according to data collated by the Intensive Care National Audit and Research Centre.

The data bolsters suggestions that doctors are getting better at treating the disease, with scientific breakthroughs boosting the survival odds of patients.

Medics can now use drugs such as dexamethasone — a steroid that cuts the risk of death in the most critically-ill by up to a third, and remdesivir — which can speed up recovery.

It means they are no longer having to rely on ventilators to treat every severely-ill patient, experts say.

This map shows the North West and Midlands have had the most patients placed on ventilators since September 1. It is from a report by Intensive Care National Audit and Research Centre . 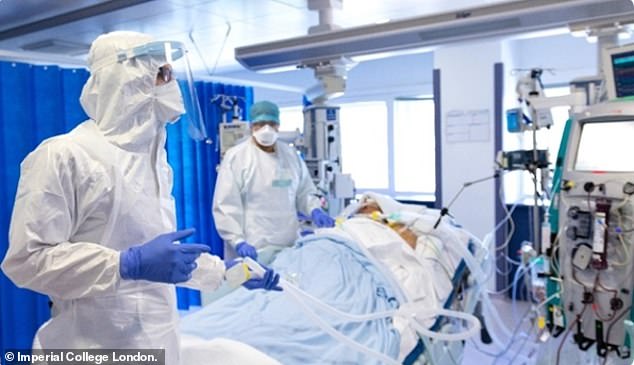 Survival rates after entering critical care also appear to be improving, official data shows, although the final outcome for many patients is yet to be revealed.

But 66 per cent of the 211 patients admitted to hospital last month for whom data was provided remained in intensive care or in hospital when the data was gathered for the report.

The North West and Midlands have seen the most patients admitted to critical care since September 1, at 126 and 93.

They are followed by the North East and Yorkshire, at 90, London, at 73 and the South East and Wales, with 17 each.

Professor of surgery and data science at the University of Edinburgh, Ewen Harrison, told The Times doctors have realised even patients that look ‘very sick’ can avoid the need for ventilation.

‘At the peak of the first wave, which was about April 1, about one in six men and one in ten women (admitted) were (intubated),’ he said.

‘That dropped off quite quickly – at the beginning of June it was only about one in twenty people.

‘If anything has changed, it’s a realisation that even when patients look very sick they can potentially get away without having to be ventilated.’

Doctors are reportedly also shifting away from the ventilators involving intubation to less invasive forms of breathing support.

This includes CPAP machines, where a constant flow of air is delivered through a mask ensuring there is enough pressure to keep the lungs open.

Downing Street initially invested heavily in ventilators, spending almost £600million on 30,000 machines — most of which are now tucked away in storage.

It comes after an Oxford University analysis in June found the risk of dying from coronavirus after being hospitalised has plummeted since the peak of the outbreak.

Six per cent of people admitted to hospitals in England with the virus died at the beginning of April.

But the figures show by June 15, just 1.5 per cent of Covid-19 patients were dying of the disease — a quarter of the level at the peak of the crisis.

Statisticians couldn’t pin down exactly why survival rates had fallen so much – but they said doctors may have become better at treating the virus.

In April there was no approved medicine to treat Covid-19, a disease still shrouded in mystery after jumping from animals to humans at the end of 2019.

One of the researchers admitted the newly-approved drugs may have been partly behind the fall, but he said there would be other factors at play.

Dr Jason Oke admitted a less optimistic explanation may have been a large number of mild to moderately ill patients were turned away from hospitals in April.

If only the sickest – who are more likely to die from Covid – were treated, then it could skew the death rate upwards, even if there was no difference in the actual survival rate. 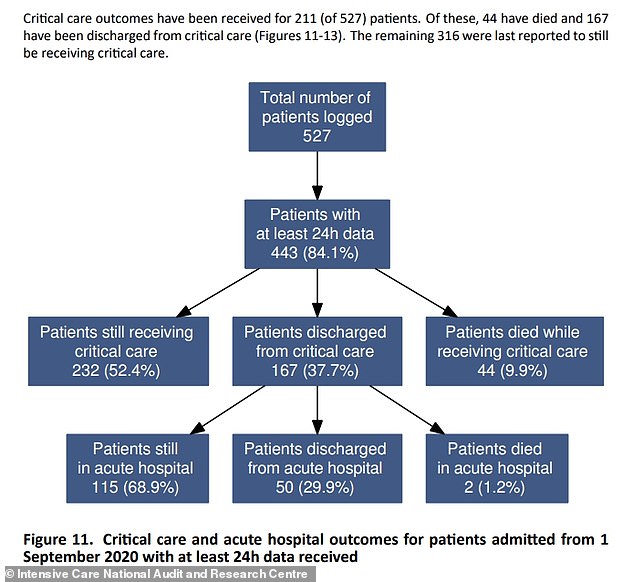 The above flow chart shows the outcomes for 211 Covid-19 patients in UK hospitals. They were admitted after September 1

HOW HAVE DOCTORS GOT BETTER AT TREATING COVID-19?

This steroid was added to doctors arsenal of medications for treating coronavirus in June. The cheap and widely available drug saves lives by calming the immune system.

Medical advice says it should be given in ‘severe and critical’ cases only, as in more mild infections it could make the disease worse by impairing the body’s ability to fight it off.

When given, the UK’s recovery trial has found it can save one in every eight patients on a ventilator and one in every 25 patients receiving oxygen.

When given as a fixed dose over seven days the drug improved outcomes in 93 per cent of patients, a study by Imperial College London found.

Professor Gordon, chair in anaesthesia and critical care at the university, said: ‘We’ve found clear, reliable evidence in high quality clinical trials of how we can tackle this devastating disease. Steroids are not a cure, but they help improve outcomes.’

This drug was brought to the frontline in May, after trials showed it could cut recovery time for Covid-19 patients by around four days, from 15 to 11.

First developed to treat Ebola, it works by confusing the virus as it looks chemically similar to the materials the virus needs to replicate.

Although made available on the NHS, hospitals have been told to ration the drug and only make it available for those most in need. This comes as its manufacturer, Gilead, warns it will not be able to keep up with global demand.

Antibodies are produced by the immune system when fighting a virus. They work by attaching to the virus’ binding sites, meaning it cannot attach itself to other cells and damage the immune system.

Two monoclonal antibodies are currently being multiplied by US biotech company Regeneron. They will be given to 2,000 people in the UK as part of the UK Recovery Trial to find out whether the treatment is effective.

Blood plasma has also been extracted from coronavirus survivors to administer to those most in need. This will contain their antibodies which fought off the virus. MailOnline contacted donors who gave their blood plasma.

Trials are underway to see whether drugs that cause the blood to thin, reducing the risk of clots in the lungs, could help to treat coronavirus.

Medics are examining herapin, which is usually used to treat heart attacks, as a potential Covid-19 treatment in thirty hospitals across the UK.

It is being considered alongside zilucoplan, which can reduce damage to lung tissue.