The United States on Thursday recorded a slight drop in the number of reported coronavirus deaths just a day after setting a record the day before as fatalities surpassed 2,500 within a 24-hour period.

As of midnight on Friday Eastern time, the US has recorded 677,824 confirmed cases of coronavirus.

On Thursday, the US added 31,935 cases to the coronavirus count.

That figure does not include the total number of probable deaths – those individuals who died in their home or in a nursing home and did not receive a medical test since March 11.

American officials said that 3,914 people are in this category of people likely to have died of the virus.

A statistical model relied on by the White House projected that the peak death day would be Monday with 2,150 fatalities.

Experts view deaths as a ‘trailing indicator’ that continues to increase for several days even if new cases and hospitalizations decline – as people who were hospitalized days or weeks ago continue to pass away.

The statistical model from the University of Washington’s Institute for Health Metrics and Evaluation predicted this week that the total US deaths in the pandemic could reach about 68,800 by early August.

It suggests the US has not yet hit the halfway point for potential fatalities.

New York, which remains the epicenter of the US outbreak, recorded a decrease in its daily death toll on Thursday.

The number of infections in hard-hit New York have increased to 222,000.

New York Governor Andrew Cuomo has extended the state’s lockdown by two weeks until May 15.

Cuomo said on Thursday that while the rate of hospitalizations in New York is decreasing, it was still unclear how many people have actually been infected with COVID-19.

He said the unknown tally of infections is what is stopping him from reopening the economy because if people who don’t know they are infected return to work, they risk infecting countless others and wiping out all the progress that has been made.

Cuomo, who has emerged as a leading national voice on the pandemic, said the improvement in key metrics reflected social distancing efforts that had brought the infection rate in his state low enough to control the outbreak.

A total of 17,735 people were hospitalized across New York because of COVID-19, down from 18,335 a day earlier and the lowest since April 6, Cuomo said. Intubations and admissions to intensive care units also declined, he said. 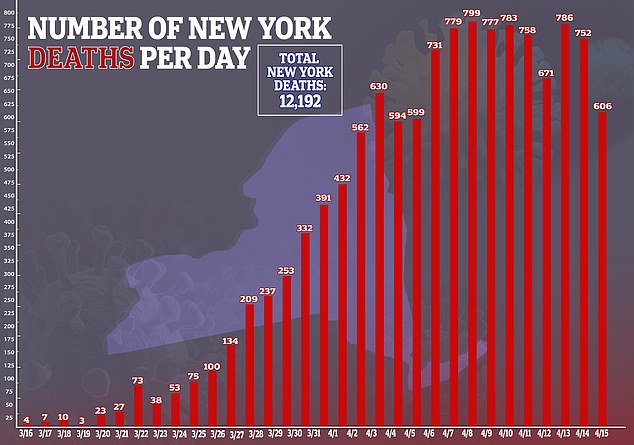 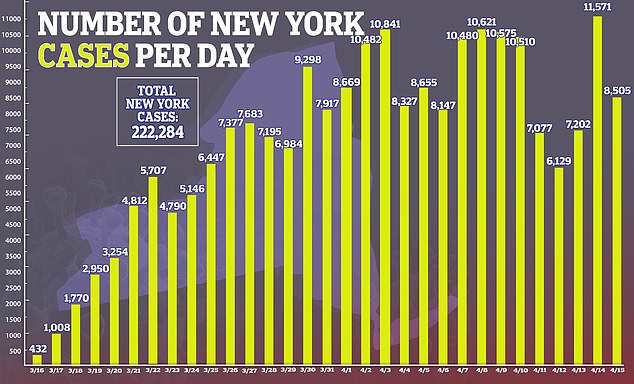 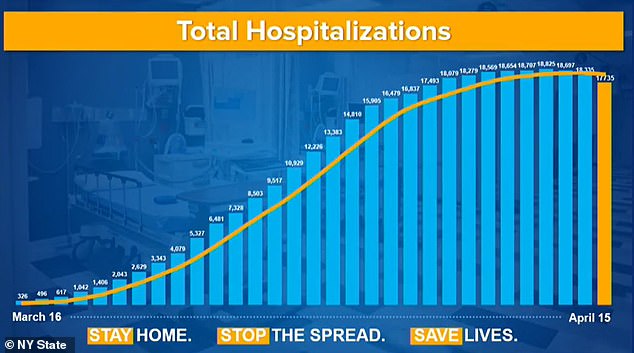 Cuomo said on Thursday that while the rate of hospitalizations in New York is decreasing, it was still unclear how many people have actually been infected with COVID-19 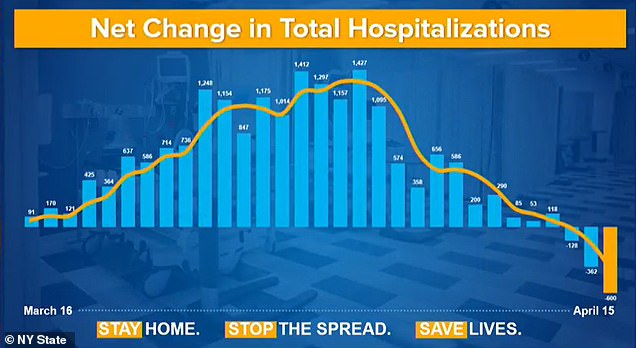 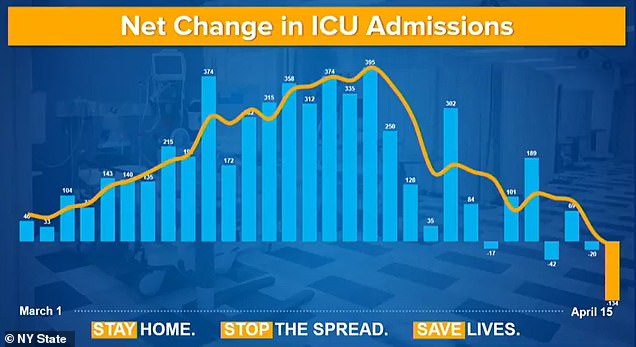 But Cuomo noted that about 2,000 infected people were newly admitted to hospitals on Wednesday, and that while deaths declined to 606, marking the lowest daily count in more than a week, the toll on his state was still significant.

‘That is still continuing at a really, really tragic rate,’ Cuomo said of the death tally, adding that there were 29 fatalities at nursing homes, which he called ‘ground zero’ in the fight against the virus.

Cuomo said there was room for optimism in how social distancing had lowered the infection rate to 0.9 across New York, meaning one infected person was causing less than one new infection.

New Jersey Governor Phil Murphy on Thursday ordered a review of long-term care facilities across the state after learning that one nursing home had piled up dead bodies in a makeshift morgue.

Murphy said he had asked his attorney general to investigate long-term care facilities after being ‘outraged that bodies of the dead’ had been stacked in a provisional morgue at an overwhelmed nursing home in Andover, a northern New Jersey town.

‘Last Saturday, we were notified that the facility was in need of body bags for deceased residents. And it was also reported that there were 28 bodies being stored in that facility,’ Judy Persichilli, the health commissioner, said.

While New York appears to have passed the worst of the crisis, New Jersey has yet to call a peak.

New Jersey reported an additional 362 deaths for a total of 3,518, now exceeding the number of residents who died in World War 1, Murphy said.

New Jersey has joined New York, Connecticut, Delaware, Massachusetts, Pennsylvania and Rhode Island in a pact to coordinate the reopening of their economies.

Murphy extended the closure of New Jersey public schools until May 15, conforming in part with the plan laid out by Cuomo, who said he would be looking at the infection rate and other metrics to decide when to end the shutdowns in New York.

‘One month is a long time,’ Cuomo said. ‘What happens after that, I don’t know – we will see, depending on what the data says.’

President Donald Trump’s social distancing guidelines are set to expire on April 30 and he has cited May 1 as a target for reopening the country.

Trump laid out new guidelines on Thursday for states to emerge from a coronavirus shutdown in a staggered, three-stage approach meant to revive the US economy even as the country continues to fight the pandemic.

The recommendations call on states to show a ‘downward trajectory’ of COVID-19 cases or positive tests for the disease over 14 days before proceeding with the plan, which gradually loosens restrictions on businesses that have been shuttered to blunt the spread of the virus.

‘We are not opening all at once, but one careful step at a time,’ Trump told reporters at the White House.

The president had said earlier this month he wanted to reopen the economy with a ‘big bang.’ 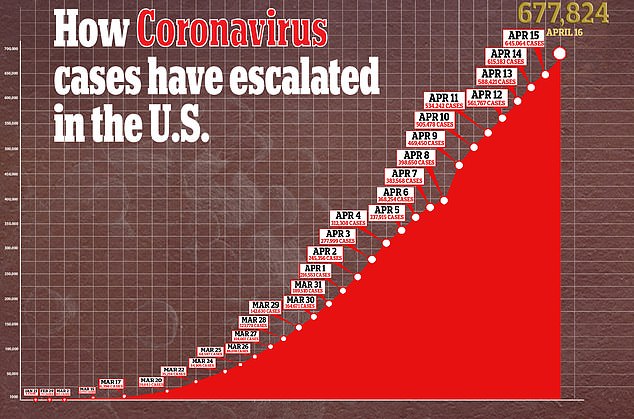 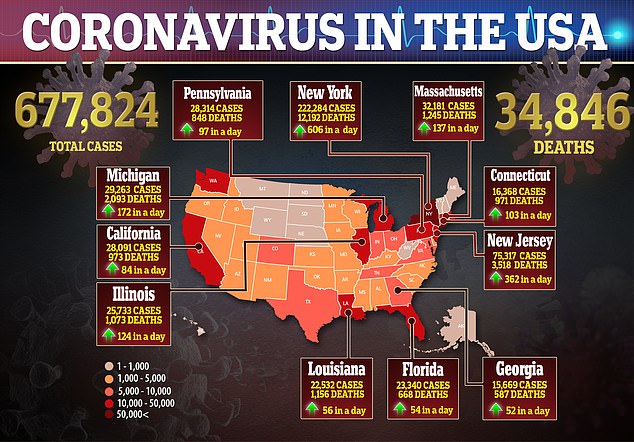 The plan is a set of recommendations for state governors, not orders. In that sense, it represents a backdown by Trump, who on Monday insisted he had total authority to direct states to re-open or remain closed.

The responsibility for such decisions lies with state, not federal, authorities.

With the onus on governors, the plan also gives Trump political cover if not everything goes well.

The president, a Republican who is running for re-election in November, has faced criticism for downplaying the seriousness of the virus in the early weeks of the outbreak.

‘This isn’t a plan. It’s barely a powerpoint,’ he said on Twitter, noting it did not include provisions to ramp up testing or set a specific standard for levels of the disease before economic opening.

Democrats such as House Speaker Nancy Pelosi and Biden said testing was key to opening the country and criticized Trump’s presentation for lacking specifics.

‘I wouldn’t call it a plan. I think what he’s done, he’s kind of punted,’ Biden said in an interview on CNN.

The new guidelines effectively end, at least for some states, the 30-day federal virus mitigation rules that were meant to stay in place through the end of April.

States that have met the criteria can move into the first phase of re-opening on Friday, Trump said. Some 29 states would be in a position to re-open soon, he said.