As the world emerges from COVID-19-related isolation, selfie-related fatalities have skyrocketed.

There have already been 24 reported deaths associated with daredevils looking for the perfect self-portrait, compared to just seven in 2020.

Falls are the most common cause of selfie fatalities, responsible for a third of all deaths, according to data collected by U.K. risk and safety assessment firm Rhino Safety, following by drownings, which were responsible for about one in five.

Men are more than twice as likely to die in the pursuit of a selfie than women, 64 percent to 30 percent, according to the report.

Since researchers began tracking selfie-related deaths in 2011, India has recorded the most, 184, with the U.S. in second with 25 and Russia in third with 19.

The former Soviet Union had to issue selfie guidelines after citizens wounded themselves with self-inflicted gunshots, pulling pins out of grenades and touching live wires.

Tourists are most often reported taking dangerous selfies, but experts said employees who work in high-risk environments are also guilty of putting themselves in harms way.

In July, Chinese crane operator Xiao Qiumei fell 160 feet to her death filming a video for her 100,000 followers on social media.

There have already been 24 reported selfie-related deaths this year, compared to just seven in all of 2020

The same month 23-year-old Qiumei died, hiker Sofia Cheung plunged to her death while taking selfies at the edge of a waterfall in Hong Kong.

The 32-year-old was shooting her self-portrait when she slipped off a rock near the Tsing Dai river in Tuen Mun and fell over a steep drop into the 16-foot deep pool below.

Cheung, who only had about 6,000 followers on Instagram at the time of her death, frequently posted pictures from risky locales.

That same month, visitors to Birling Gap in East Sussex were seen snapping pics of themselves on the quickly eroding cliff. 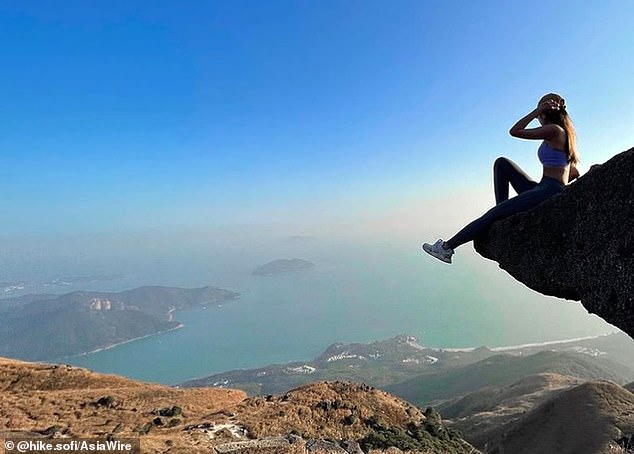 In one shot, a woman is holding a man’s legs as he peers over the edge, while in another another woman is inches from the edge as a friend holds onto her jacket.

A SELFIE TO DIE FOR?

Millions of people hold up their phones every day to snap a selfie to share with friends.

But more people have died taking selfies than were killed by sharks.

in 2015, atotal of 12 people are known to have suffered selfie-related deaths after either falling or being struck by a moving vehicle when taking a picture of themselves.

According to data compiled by Mashable, only eight people were known to have been killed by a shark that year.

Experts say as social media evolves people are willing to put themselves in more and more dangerous situations.

This has prompted some wildlife parks to tighten regulations as officials worry people will take selfies with wild bears.

Some cyclists have spoken of how spectators should be banned from taking selfies while watching the Tour de France.

Signs at Birling Gap warn that dangling on the edge is ‘incredibly dangerous’ as there are giant cracks in the chalk that could give way at any moment.

While the 24 deaths so far in 2021 are shy of the record 107 fatalities in 2017, Rhino Safety director Simon Walter said the number could continue to rise with the toxic combination of lockdown FOMO (fear of missing out) and relaxed travel measures.

‘If the last 18 months have taught us anything, it’s that being able to get out and explore is vital for our physical and mental health,’ Walter said.

‘While social media platforms can be amazing places to build connections with people across the world, the pressure to stand out can push people to take risks to create ‘exciting’ content which can, unfortunately, end in disaster.’

Walters pointed out the statistics don’t account for the thousands of non-fatal injuries that take place each year in the pursuit of ‘likes.’

‘It’s important, now more than ever, to reflect on the risks we are willing to take, and if a selfie is really worth losing your life over,’ he said.

While selfies are sometimes considered tools for empowerment, numerous studies have linked looking at selfies to body-image issues among young women. 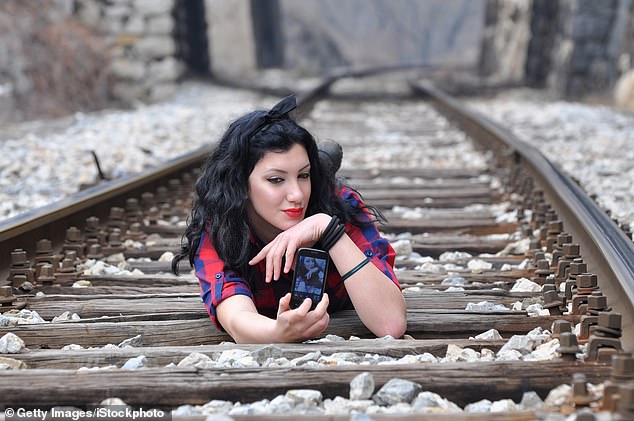 Men are twice as likely as women to die while trying to take a selfie, 63 percent to 30 percent

‘The approval that comes from ‘likes’ and positive comments on social media is rewarding – particularly for the lonely, isolated or insecure,’ psychologist Michael Weigold of the University of Florida wrote on The Conversation in 2016, a year which saw 103 selfie deaths.

‘However, the evidence, on balance (combined with people and animals dying!), suggests there is little to celebrate about the craze.’ 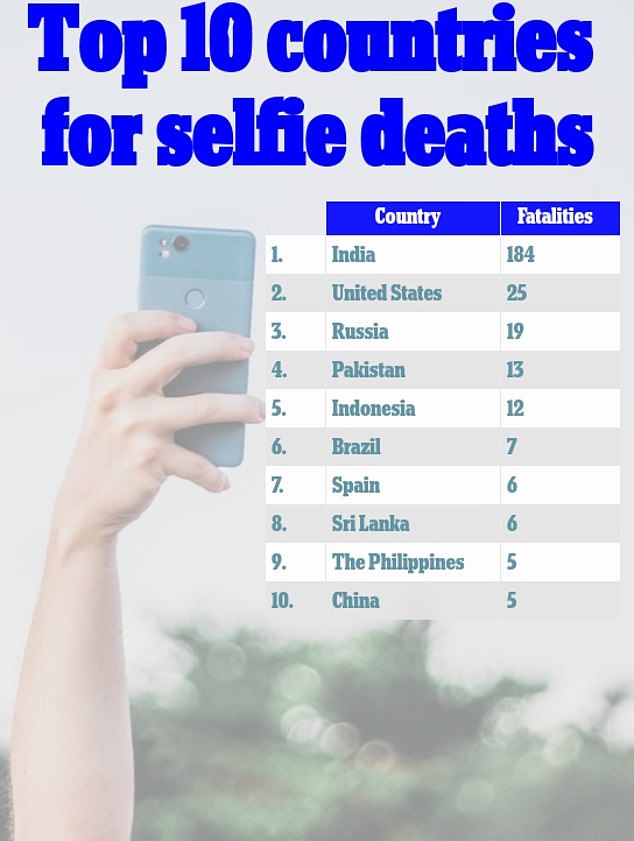 According to Rhino Safety, India is by far the country with the most self-related deaths. In 2016, a 66-yea-old taking a selfie at the Taj Mahal stumbled and had a fatal heart attack

Apart from injuries, fatalities and tastelessness, one big issue with selfies appears to be their function as either a cause or consequence of narcissism.

Writing for Psychology Today, Peter Gray describes narcissism as ‘an inflated view of the self, coupled with a relative indifference to others.’

Narcissists tend to overrate their talents and respond with anger to criticism. They are also more likely to bully and less likely to help others. According to Gray, surveys of college students show the trait is far more prevalent today than even as recently as 30 years ago. 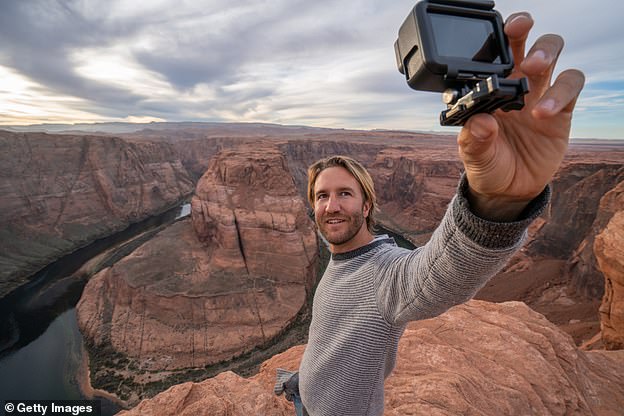 Research indicates narcissism is on the rise among young adults, with experts suggesting a link to selfie culture

Do selfies and narcissism correlate? Psychologist Gwendolyn Seidman suggests that there’s a link. She cites two studies that examined the prevalence of Facebook selfies in a sample of over 1,000 people.

Men in the sample who posted a greater number of selfies were more likely to show evidence of narcissism. Among female respondents, the number of selfie posts was associated only with a sub-division of narcissism called ‘admiration demand,’ defined as ‘feeling entitled to special status or privileges and feeling superior to others.’