The pace of new COVID-19 infections is continuing to decelerate as the country starts nearing the end of the fourth wave of the pandemic.

This means that although the overall number of cases has risen in the last month, the growth rate has significantly slowed to the lowest since early July.

New infections increased 10 percent from the 130,221 average reported on August 15, compared to the same time last month when cases rose 322 percent over a four-week period.

Nearly half of U.S. states and the District of Columbia have seen Covid infections either decline or hold steady over the last two weeks, a DailyMail.com analysis of the data shows.

Deaths currently are on the rise with 279 virus-related fatalities recorded on Sunday with a seven-day rolling average of 1,655, which is a 156 jump from the average of 644 reported four weeks ago.

The pace has also risen and, at the same time last month, there was only a 98 percent increase in COVID-19 deaths over a four-week period.

However, experts say that fatalities are a lagging indicator and often don’t start to decline until two or three weeks after cases do.

It comes as cumulative vaccination rates continue to increase in many states with five- Connecticut, Maine Massachusetts, Rhode Island and Vermont – revealing they have vaccinated at least two-thirds of all residents. 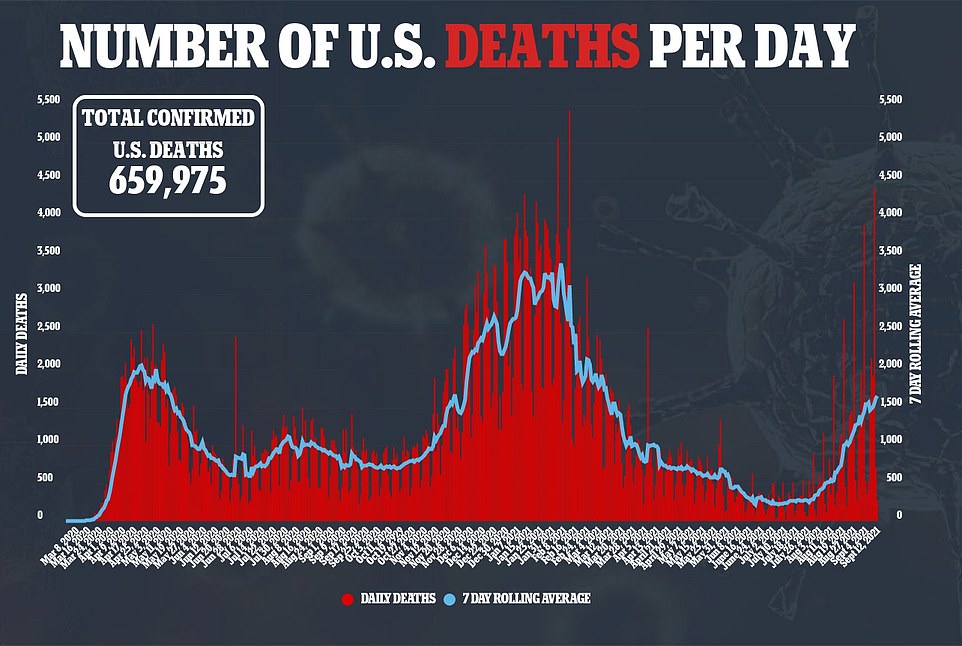 Deaths have risen with 279 recorded on Sunday and a seven-day rolling average of 1,655, which is a 156% from the average of 644 reported four weeks ago, but deaths are a lagging indicator 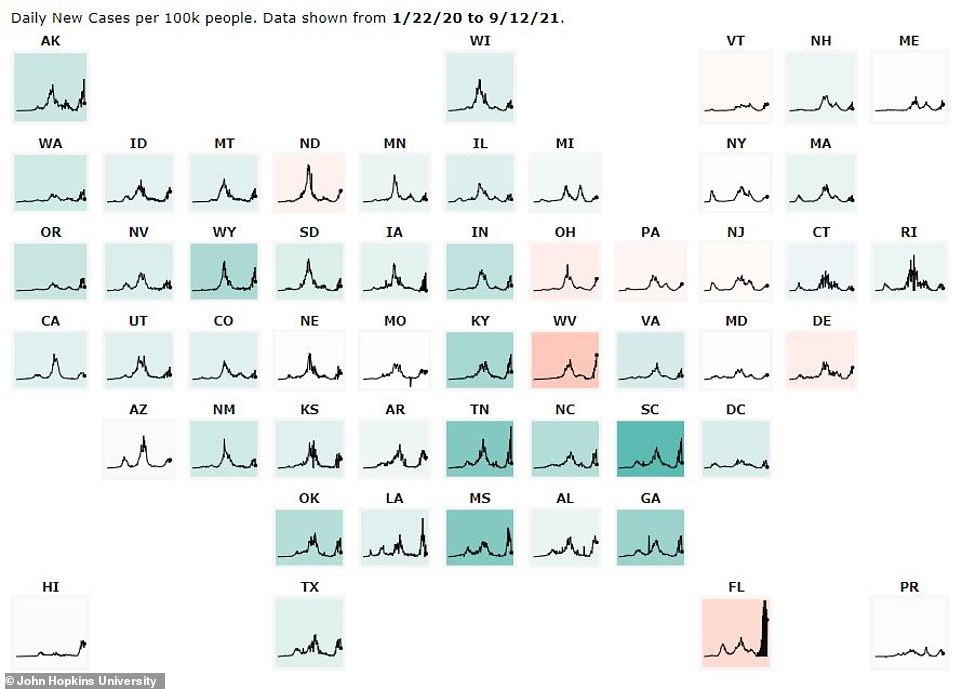 Nearly half of U.S. states and the District of Columbia have seen Covid infections either decline or hold steady over the last two weeks

Experts say that the slowdown of the fourth wave – fueled by a surge of the Delta variant – can be attributed to a few factors.

One reason is that as more people have contracted COVID-19 over the last month, the virus has run out of people to infect.

Another is that vaccination rates have boosted, both due to a fear of Delta and an increasing number of mandates.

As of Monday, 27 states and the District of Columbia have fully vaccinated at least half of all residents, according to data from the Centers for Disease Control and Prevention (CDC).

Of those states, five have fully-vaccinated two-thirds of their populations.

Vermont currently leads the pack have fully vaccinated 68.6 percent of its residents. Connecticut closely follows at 67.1 percent and Maine (66.8 percent), Massachusetts (66.8 percent) and Rhode Island (66.1 percent) round out the top five.

All five also have among the lowest COVID-19 case rates in the nation with Connecticut recording the lowest seven-day average of 106.5 cases per 100,00 people, CDC data.

But while the Northeast is doing well, other states are continuing to fill hospital beds, mostly with unvaccinated patients. 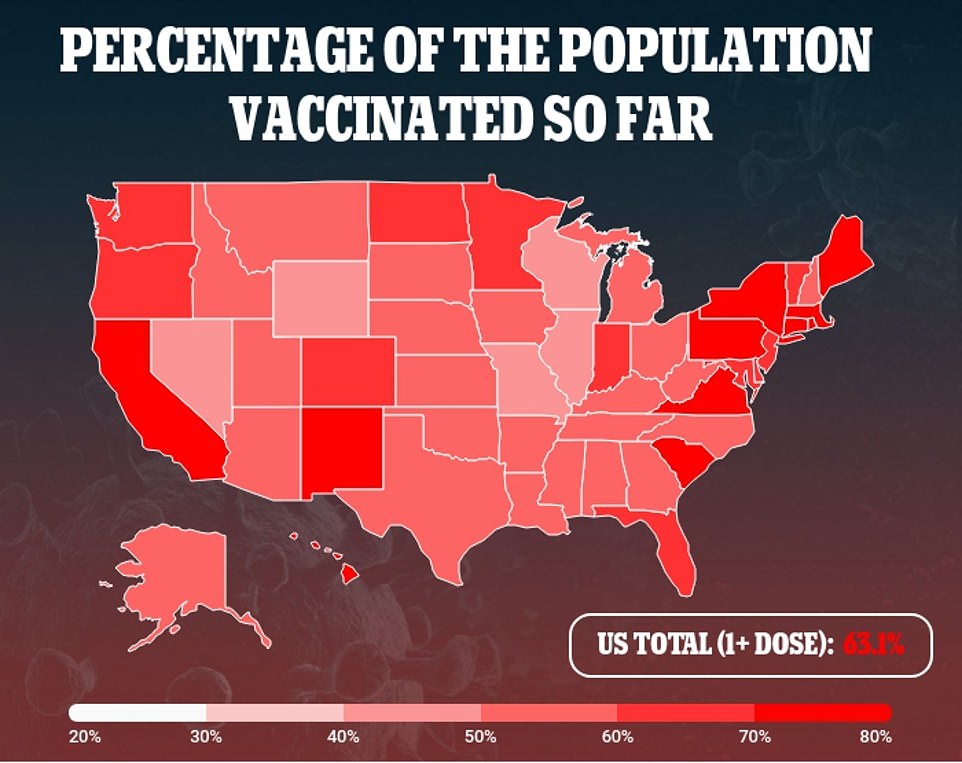 More than half of states have fully vaccinated at least half of all residents and five states – Connecticut, Maine, Massachusetts, Rhode Island and Vermont – have vaccinated two-thirds 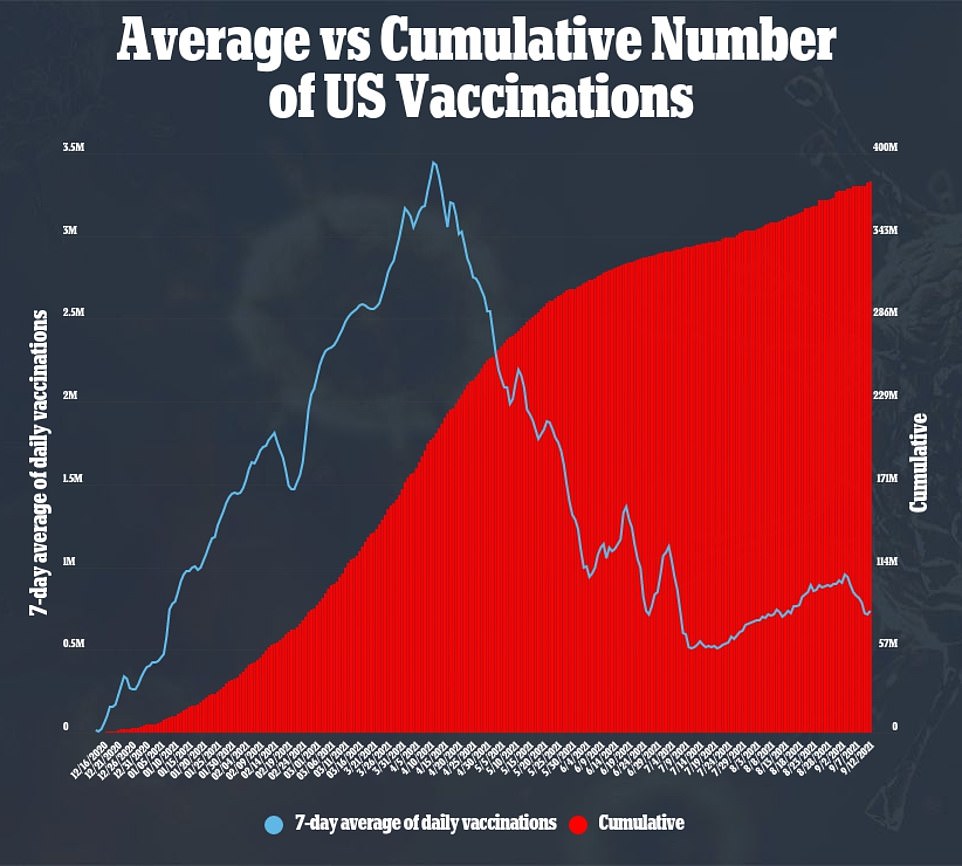 Overall, hospitalizations have declined with 96,870 Americans receiving inpatient care for COVID-19, according to the Department of Health and Human Services (HHS).

In West Virginia, a total of 810 patients are currently hospitalized with the virus, as the state nears its highest-single day total of 818 set in January 2021.

However, the state has set two other records as of Saturday, the latest date for which data is available, with 254 patients in the ICU and 161 on ventilators.

West Virginia currently has the lowest vaccination rate in the nation with just 39.9 percent of resident fully vaccinated against Covid.

‘Back when we started down this pathway with the Delta variant, I came to you and said that we really needed to buckle up, because this thing could run rampant all across our state,’ Gov Jim Justice said during a press briefing on Friday.

‘Well it surely has.’

According to Dr Clay Marsh, West Virginia’s COVID-19 czar, 85 percent of hospitalized COVID-19 patients have not been vaccinated.

This includes 90 percent of ICU patients and between 91 and 93 percent of those on ventilators.

‘We’ve reached that level of hospital bed capacity, taken up by people infected with COVID-19, about 100 days quicker than we did during our last surge in December 2020,’ Marsh said during the press briefing. 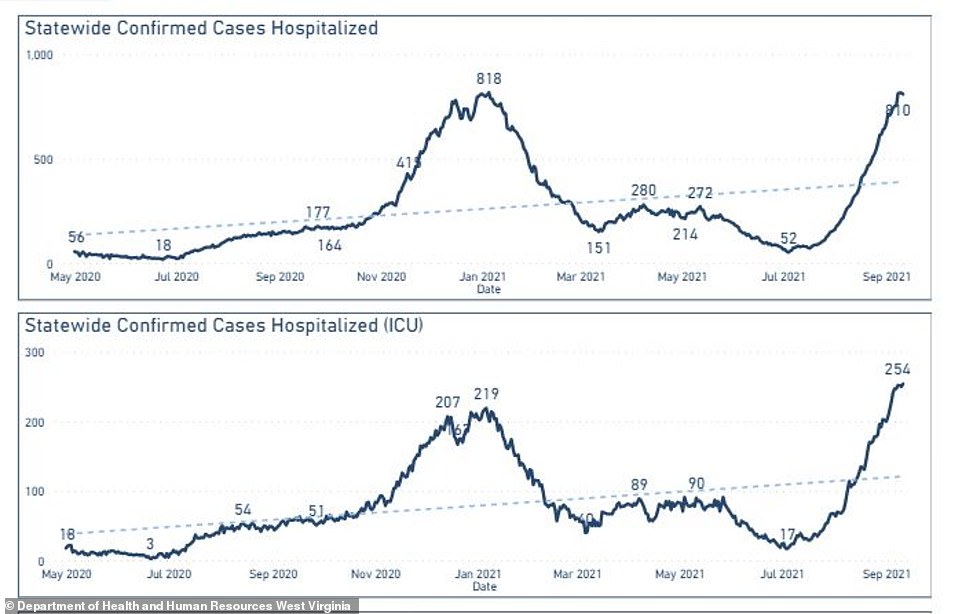 In West Virginia, 810 patients are currently hospitalized with COVID-19, a near-record-high, and 254 patients in the ICU, the highest single-day total since the pandemic began 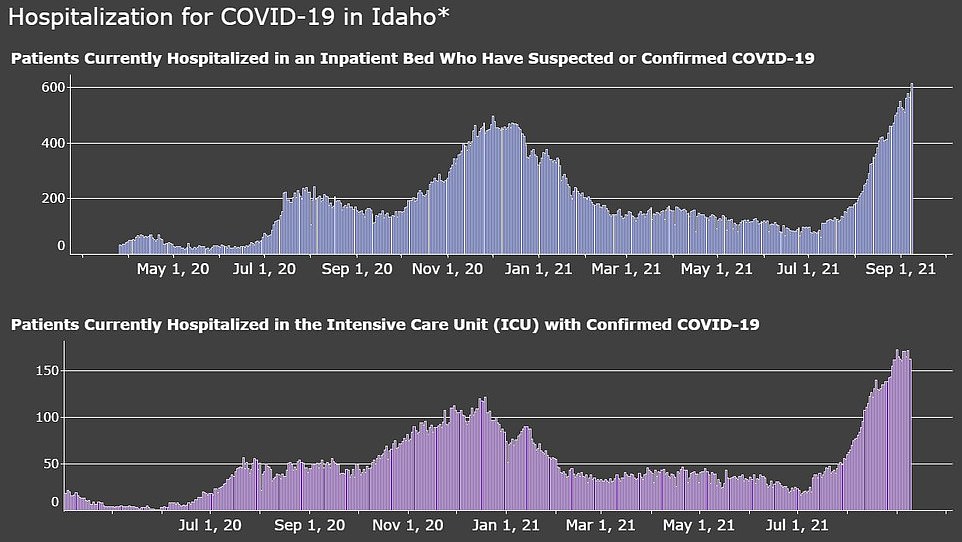 Meanwhile, hospitals in Idaho remain overwhelmed by a surge of COVID-19 patients.

Data from the state’s Department of Public Health shows that a record-high 613 residents are receiving inpatient care for the virus.

Similarly to West Virginia, Idaho has one of the lowest rates of fully vaccinated residents at 40.1 percent compared to the national average of 53.8 percent.

‘It’s really hard to be a physician at the front lines, doing this every single day and living in a state where the vaccination rate is so low,’ Dr Meghan McInerney, the medical director of the ICU at Saint Alphonsus Regional Medical Center in Boise, told ABC News.

The hospital is currently treating 45 COVID-19 patients, a dramatic rise from the just five receiving care in spring 2021.

Doctors told the network that patients deny that they have COVID-19 even as they lay dying.

‘Don’t tell me I have Covid. I don’t believe in Covid,’  patients have told Dr Carolyn McFarlane, a hospitalist at Saint Alphonsus.

‘There is an almost adversarial tone to things when we ask, ‘Did you get vaccinated?” she told ABC News.

‘It creates a rift in the tone of the room, because it’s a feeling of: “Well you’re going to treat me differently because I didn’t get vaccinated,” and that is far from the truth.’ 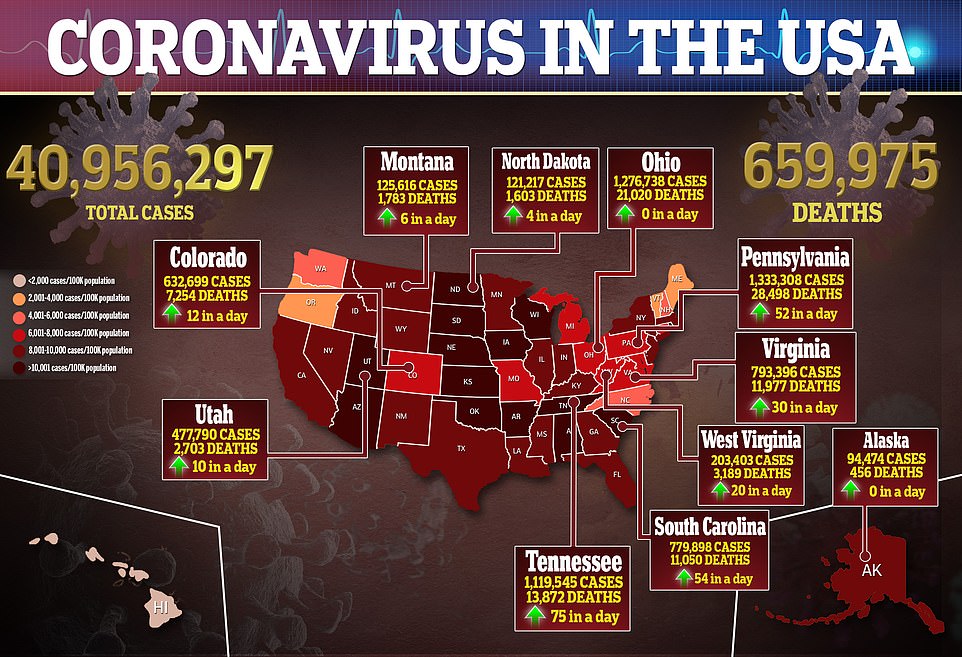