Tolerance of noisy neighbours has plummeted across the country during the past two years, new research suggests.

In the last financial year almost 450,000 noise complaints were made to councils across Britain, equating to 1,229 every day – or one every 70 seconds – according to Churchill Home Insurance.

The real number of noisy neighbours may be even higher than official figures as only a third of people have acted in response to a noise dispute with their neighbour. 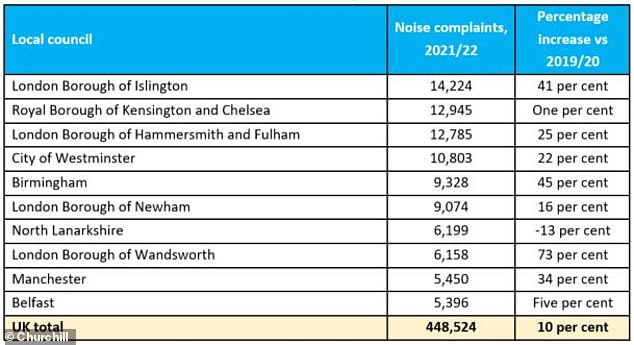 The most common causes of excessive noise are playing loud music at 19 per cent, hosting parties at 16 per cent, animals at 13 per cent, as well as children and arguments, both at 12 per cent.

Councils issued 4,015 noise abatement notices last year, a rise of 15 per cent on the year before when 3,487 were issued.

However, it still means fewer than 1 per cent of complaints end up with a notice issued.

An abatement notice from a local authority may require that the noise be stopped altogether or limited to certain times of day. People served with a notice have 21 days to appeal.

The Noise Act 1996 specifies that night time lasts from 11pm to 7am for noise purposes and any excessive noise within that time is considered anti-social behaviour. 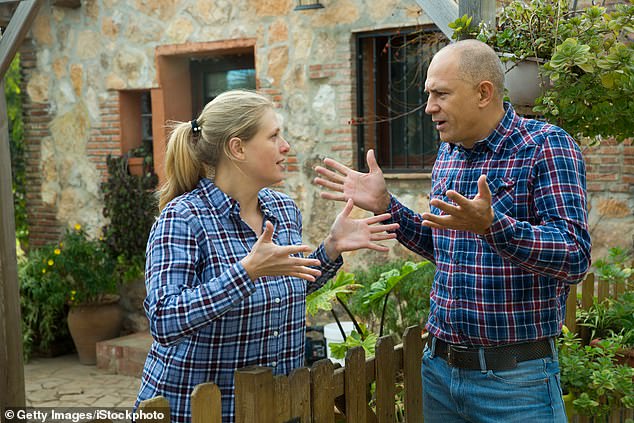 More than half of people have been affected by excessive noise from neighbours between these times within the last 12 months.

When it comes to resolving noise disputes, almost two thirds of victims tried to tackle the matter by speaking to their neighbour.

However, in only half of these cases did it lead to the issue being resolved. 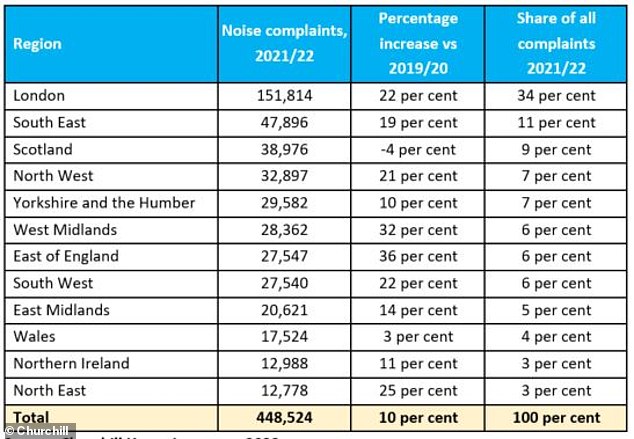 Sarah Khan, of Churchill Home Insurance, said: ‘Noise can be extremely disruptive to our lives, especially if we feel it is excessive and during antisocial hours when we’re trying to rest or sleep.

‘As a nation it seems we have become less tolerant to noise over the last few years, but we are also home a lot more now as so many of us work from home or have a hybrid working patterns.

‘There are rules governing noise so if you are affected then try speaking to your neighbours and explaining the problem and impact. If that doesn’t work, then keep a record of the type of noise and time of day it happens and speak to your local council about raising a noise complaint.

North London estate agent Jeremy Leaf explained: ‘Unless you have the budget to live in splendid isolation in the middle of nowhere it is likely that you will come across neighbours. Generally speaking, positive neighbour experiences add to the value and saleability of a property while the other sort can have the opposite effect.

‘Before buying or renting property it is always a good idea to try to find out a bit more about one’s neighbours. There may be secrets to unravel; do some research online as to what’s happening locally, such as petitions, planning applications, proposed public works and planning schemes. It is also worth visiting the property at different times of day and night and on different days, including weekends, as the neighbourhood culture can vary considerably.

‘Bear in mind neighbours who seem friendly and helpful at the outset may not always be this way, and that people can come and go, with the replacements not so amenable.’

London receives the most noise complaints in Britain, recording nearly 152,000 complaints last year and accounting for a third – at 34 per cent – of the total.

This amounts to one complaint per 46 households, which is nearly four times the average outside of London – at one per 12 households.

Six of the top 10 local authorities for noise complaints last year were in London, with Islington leading the way at over 14,000, a 41 per cent increase compared to two years ago.

North Lanarkshire was the only council in the top 10 to see a reduction – down 13 per cent – in the volume of complaints compared to two years ago.

At the other end of the scale, Argyll and Bute in Scotland received just one complaint for noisy neighbours, Runnymede in Surrey received just nine and Melton in Leicestershire just 59.

Yorkshire has the highest rate of penalties to noise complaints, issuing more than 2,000 in the past three years, the equivalent to one for every 10 complaints.

While London leads the way in complaints, it has the second-lowest rate of issuing penalties for noise disturbances, issuing one order for every 79 complaints. This is second only to Northern Ireland, with one in every 88 complaints.

On a council level, Rotherham in South Yorkshire issued the greatest number of penalties for noise disturbances, with 527 last year, followed by Manchester at 147 and Fife at 146.

Bradford at 137, Kensington and Chelsea at 106, Westminster at 96, North West Leicestershire at 85, Leicester at 62, Bristol at 58 and Bournemouth, Christchurch and Poole at 55 complete the top 10.