EXPRESS INFORMER > Health & Medicine > Number of Americans getting their first dose falls under 300,000 a day for the first time since July

After a spike in COVID-19 vaccinations during the Delta surge, vaccinations in the U.S. are now dropping again.

Under 300,000 Americans got their first doses each day in the last week – the lowest daily average since mid-July, according to data from the Centers for Disease Control and Prevention (CDC).

Additionally, about 750,000 total shots were administered per day, which has not been since early August.

Some leaders, including Ohio Governor Mike DeWine are ramping up vaccine incentives once more – but it’s unclear whether such initiatives can make a dent.

Public health experts are also concerned that the flu could put additional pressure on the U.S. healthcare system as winter approaches.

The pace of Covid vaccinations in the U.S. is slowing once again. After an increase in July and August, vaccinations are now down to 750,000 new shots a day 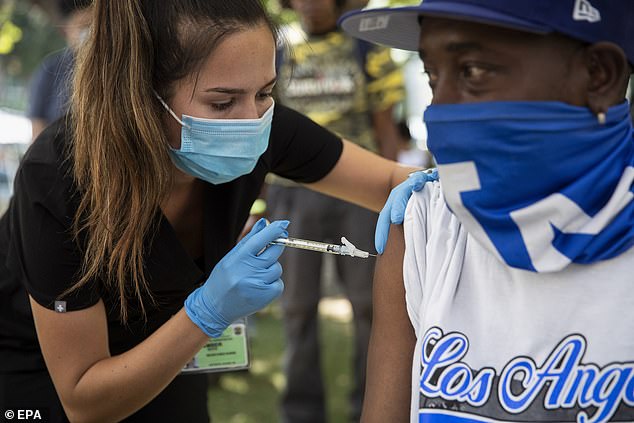 Under 300,000 people got their first doses each day in the last week – the lowest average since mid-July, according to CDC data. Pictured: A healthcare worker administers a vaccine at a clinic for individuals experiencing homelessness in Los Angeles, California, September 2021

As Delta drove a new Covid surge in July and August, many Americans who weren’t yet vaccinated decided to get their shots.

The highly-contagious variant swept across the country, driving record cases and hospitalizations in states such as Florida and Louisiana.

The Covid vaccines are highly effective at protecting people from severe disease and death caused by the virus – leaving unvaccinated people unprotected.

As Delta surged, the country finally hit President Biden’s vaccination goal – 70 percent of American adults receiving at least one dose – in early August, and numbers continued to rise from there.

According to one Kaiser Family Foundation poll conducted in July, about 22 percent of unvaccinated adults said that news of variants made them more likely to get vaccinated.

Many Americans also began to face vaccine requirements, due to a rising number of mandates from employers, school districts, and other institutions.

Following Labor Day, vaccination numbers are now dropping again – even though the Delta surge is not completely over.

Every state except for California is currently classified as ‘high transmission’ by the CDC, with at least 100 new cases for every 100,000 people in the past week.

Yet vaccinations are falling with the U.S. is now administering about 750,000 new doses a day.

This drop in vaccinations is driven, in part, by fewer people seeking a first shot.

In the last week, under 300,000 Americans got their first vaccine doses each day – the lowest daily average since mid-July, when the Delta surge was starting to drive concern.

‘Every day we chip away at the unvaccinated. Now 71 [million] are eligible but haven’t yet gotten a dose. Let’s try to reach them,’ Cyrus Shahpar, the White House Covid Data Director, tweeted on Wednesday. 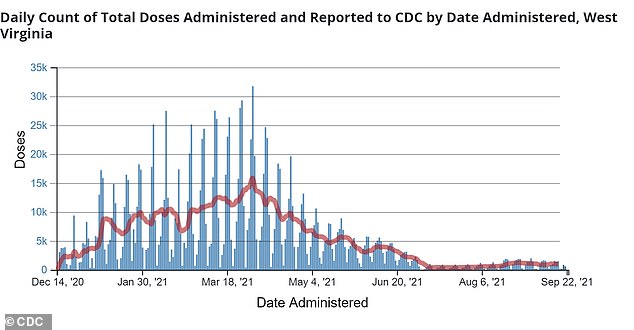 West Virginia has reported 1,000 new vaccinations each day – or fewer – in recent weeks, with little increase during the Delta surge. The state is now facing overwhelmed hospitals

Those unvaccinated Americans continue to be at higher risk for Covid infection, severe disease, and death.

This risk is clear in states with lower vaccination rates, such as West Virginia and Idaho.

In West Virginia, just 40 percent of the state’s population is fully vaccinated – the lowest vaccination rate in the country.

While state officials said this week that the surge might be reaching its peak, it will be weeks before hospitalization and death numbers come down.

Earlier this month, the state instituted crisis care standards for hospitals, as facilities were seeing so many Covid patients that healthcare staff had to prioritize those patients most likely to recover. 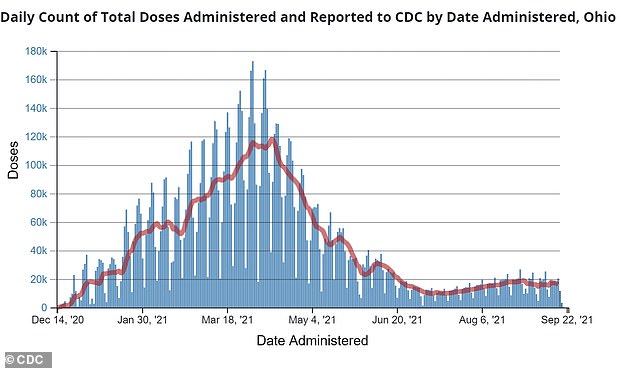 Ohio did not see a significant jump in vaccinations following its vaccine lottery. The state is currently reporting about 20,000 new doses administered a day

In response to high cases and low vaccination rates, some state leaders are introducing new initiatives in an effort to convince more people to get their shots.

‘I’ve worked with children’s hospitals in Ohio for 30 years and I’ve never seen them as concerned as they are today,’ DeWine said at a recent press conference.

It’s unclear how much impact the new incentive may have, however, as past research has shown that Ohio’s famous Vax-a-Million lottery did not lead to any significant increase in state vaccination rates.

In other states, leaders are focusing less on incentives and more on clear communication. 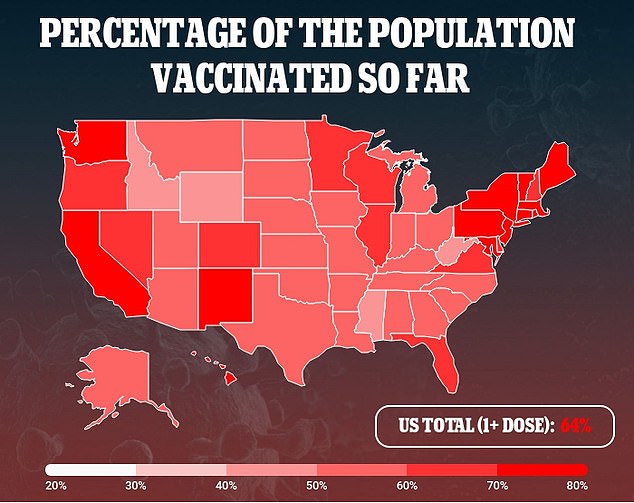 Rob Ator, who leads Arkansas’ vaccination effort, told Bloomberg that his goal is persuading the ‘moveable middle’ – in part by focusing on the risk of hospitalization for unvaccinated people.

‘When you talk to a rural state, they are used to operating without the federal government telling them what to do,’ Ator said.

‘When you force somebody, that’s when you’re going to get the biggest resistance.’

Some public health experts are also concerned about the flu, as flu season starts in September.

A bad flu season paired with continued Covid cases could be incredibly tough for the U.S. healthcare system.

‘Flu is still a killer, not as much as Covid-19, but between 12,000 and 50,000 Americans lose their lives every year from flu,’ Dr Peter Hotez, dean of the National School of Tropical Medicine at Baylor College of Medicine, told CNN.

In many health clinics around the country, Americans can now get both their Covid shot and their flu shot at the same time. 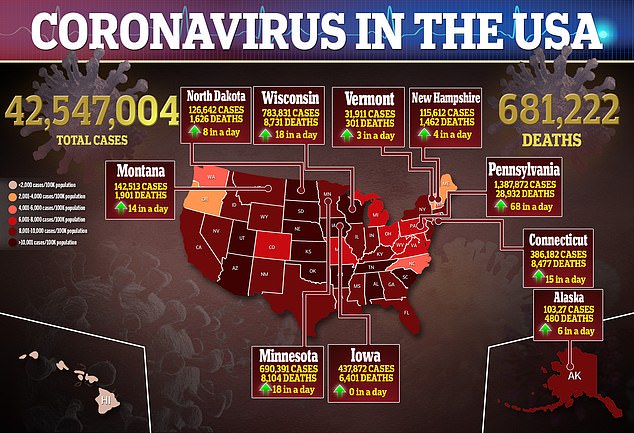