As calls come to remove Ed Koch’s name from New York’s Queensboro Bridge over his abysmal handling of the AIDS epidemic of the 1980s, it’s been revealed that the colorful city mayor was secretly gay and terrified of being outed.

Koch, who never came out during his lifetime, was a popular NYC mayor during his three terms in office from 1978 to 1989.

But the New York Times reveals that Koch, who later a TV personality and political commentator, was lonely in his later years after pushing away his Harvard-educated health consultant boyfriend of many years in case it affected his political career.

He even tried to cover his sexuality and tackle the gay rumors which had begin to swirl around him by dating the first Jewish Miss America Bess Myerson while running for office.

The pair known as ‘the candidate and the beauty queen’ became inseparable, as they attended public events, inviting tabloid speculation about an imminent engagement. Koch even referred to Myerson as his ‘first lady’ and getting married at Gracie Mansion.

But behind closed doors, the ‘master showman with plenty of chutzpah’ would drop the act and tell his closest friends how lonely he was: ‘I want a boyfriend,’ he said.

The most serious relationship in his life was with Richard W. Nathan, a 30-something Harvard-educated health care consultant, according to on-record interviews with six people who knew about the pair. 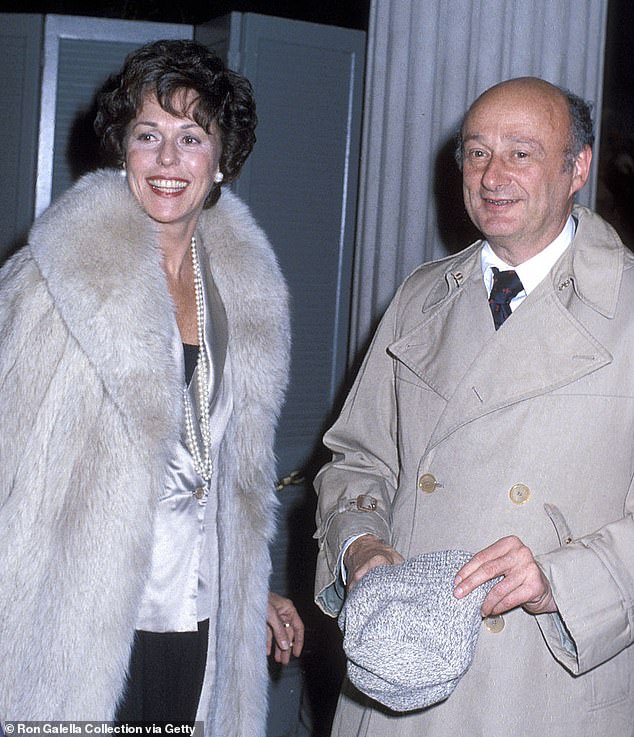 The candidate and the beauty queen, Bess Myerson, the first Jewish Miss America strategically inseparable, their pinkies entwined at public events, inviting welcome-if-misguided tabloid speculation about an imminent engagement. Mr. Koch himself called her his ‘first lady’ and hinted at how lovely it might be to get married at Gracie Mansion. Ms. Myerson and Mr. Garth both died in 2014,’ The Times wrote 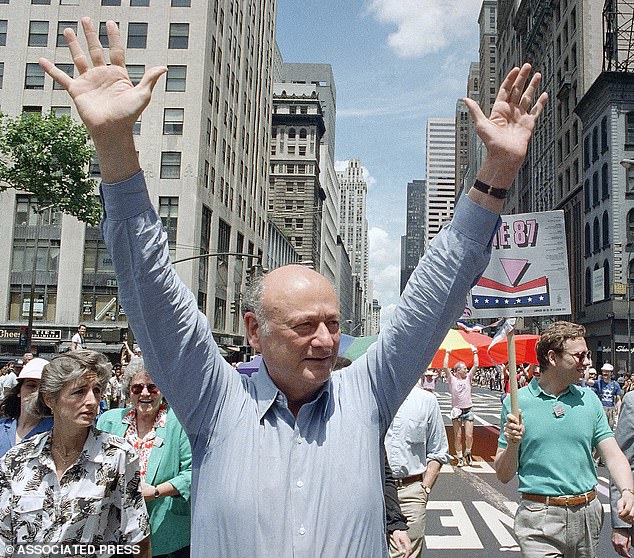 Koch marching alongside supporters of the Gay Pride parade in New York City. Koch did not reveal publicly that he was a closeted gay man, who sacrificed love, for his political ambitions 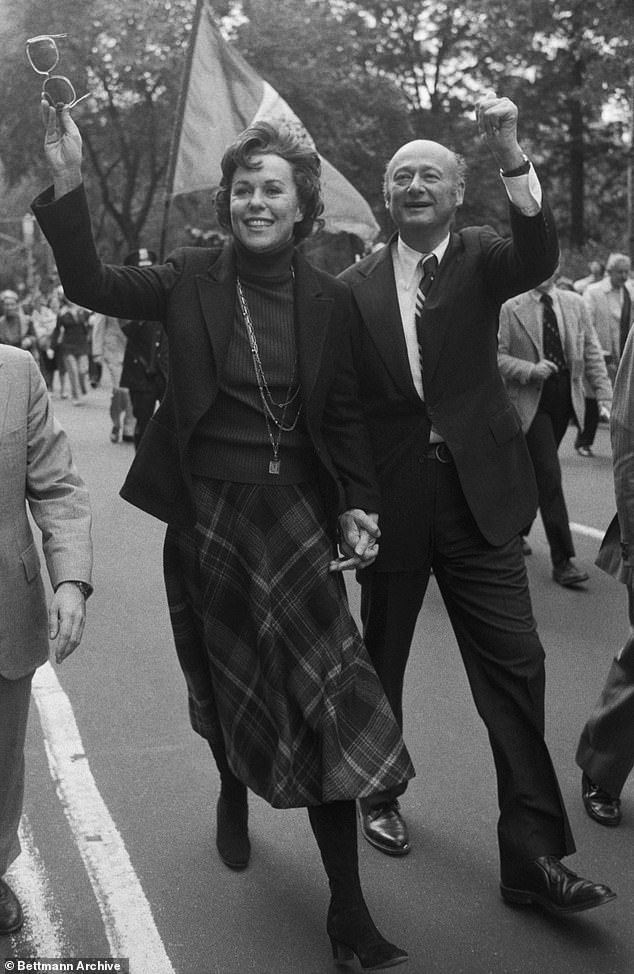 The former Mayor holding hands with Bess Myerson, the first Jewish Miss America as they smiled and waved. The pair had been labeled ‘the candidate and the beauty queen’ 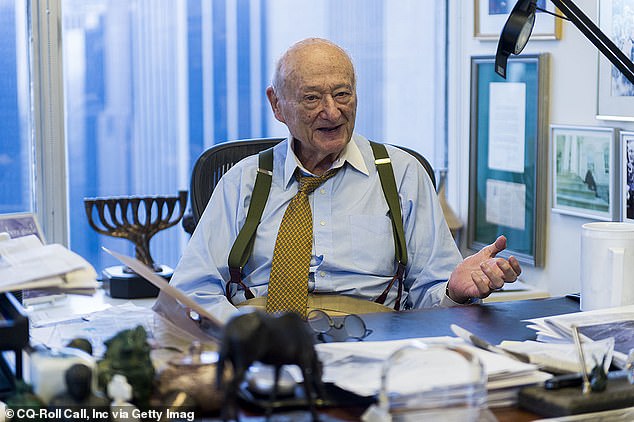 Koch grew ire from those who criticized his approach to AIDS that was an epidemic while in office. There was not yet a cure and the disease was killing hundreds in the city. Critics said he didn’t move fast enough to address the AIDS crisis in the 1980s or tackle spiraling crime

Koch, who was 50 at the time and early in his political aspirations to become mayor, met Nathan – who was 20 years his junior – at a potluck dinner at Koch’s apartment in 1976.

Nathan, who died in 1996, described their whirlwind romance as ‘something thrilling,’ and said privately then, ‘about being courted by a powerful man.’

In his bid to run for Mayor, Nathan was asked by Koch’s colleagues to leave the state, in fear it would compromise his upcoming election, which led to his involvement with Bess Myerson, the first Jewish Miss America, who was called upon to solve that dilemma.

Koch’s younger sister, Pat Koch Thaler said in an interview that while the two did not discuss his sexuality, the family would have been supportive no matter what he told them, according to The New York Times.

‘He didn’t ask me about whether I was gay or straight or bi, and I never asked him what he was, either,’ Ms. Thaler, 90, said.

She added: ‘It wouldn’t have mattered one way or the other.’

Koch also grew ire from those who criticized his approach to AIDS that was an epidemic while he was in office. There was not yet a cure and the disease was killing hundreds in the city daily. Critics said he didn’t move fast enough to address the AIDS crisis in the 1980s or tackle spiraling crime. 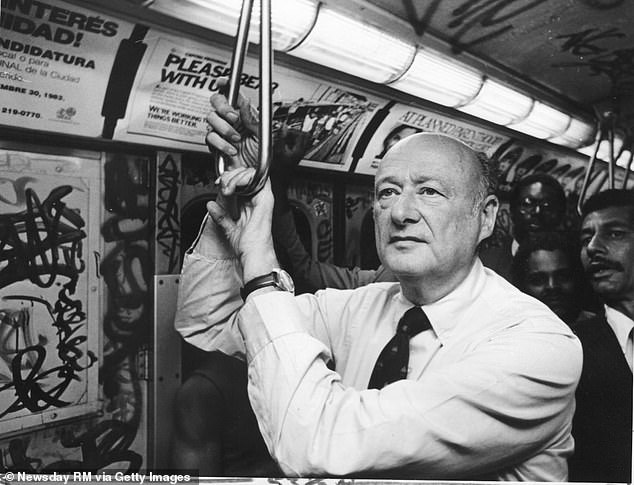 Edward Koch was described as a ‘master showman with plenty of chutzpah’ who rode the NYC subways, would often ask New Yorker’s ‘How’m I doin? who had great tenacity for the city he loved, also endured a silent pain that only those in his inner circle knew. 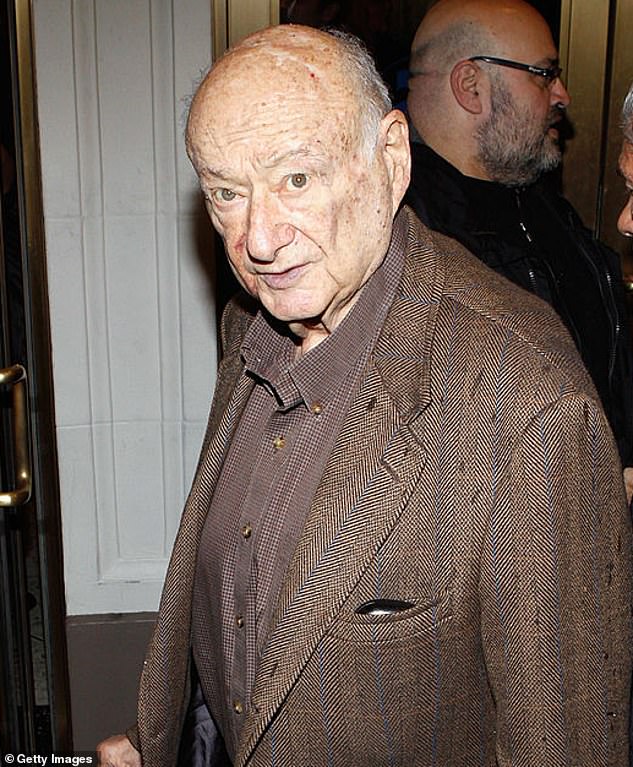 A photo of Koch in his senior years years. After his political life, he was a television judge, radio talk-show host, author, law partner, newspaper columnist, movie reviewer, professor, commercial pitchman and political gadfly. He died in February 2018 at the age of 88.

On Friday, a group of Democrats, who at one point were singing the former Mayor’s praises, are now declaring that his name be removed from the Queensboro Bridge, according to a review of records and past statements, The New York Post reported.

Jim Owles LGBT Democratic Club, whose boss, Allen Roskoff, had resentment towards Koch over his handling of the AIDS epidemic was in attendance.  Rep. Alexandria Ocasio-Cortez and Rep. Jamaal Bowman were there to have support the name removal, the news outlet reported.

Among the most notable demanding Koch’s removal was Manhattan Congresswoman Carolyn Maloney, who lobbied for it in 2011, to have the bridge named after him.