New Covid cases in NSW hit 34,994 as Victoria’s surge to 21,997 – after Scott Morrison announced plan to give out free rapid antigen tests to millions of Australians

Hospitalisations in both states still remain steady with 1,609 NSW patients receiving care, up from 1,491 on Wednesday, while Victoria has 631 in hospital, a jump from 591.

ICU rates in NSW have risen by 12 with a total of 131 in intensive care. In Victoria this number is at 51, two less than on the previous day, while six more lives were lost in the southern state.

The new infections come after major changes were made to how Australia deals with the virus with Scott Morrison announcing vulnerable residents will be given free rapid antigen tests.

The decision was made after an emergency National Cabinet meeting on Wednesday and will mean more than 6million vulnerable Aussies will have free access to the tests.

Low income earners, welfare recipients and pensioners will be provided with 10 free RATs over a three-month period which can be collected from pharmacies.

All Australians who are deemed close contacts or who have symptoms will still be able to access free rapid tests from testing clinics, with Mr Morrison stating ‘they have always been free’.

The Commonwealth will provide 10 million rapid antigen tests to be distributed throughout the states and territories for eligible Aussies.

To access the tests, which is capped at five per month, a recipient will require identification in the same way people need to prove their identity to access certain prescription drugs.

Also announced on Wednesday were changes to isolation and testing rules with those who test positive to the virus on a RAT now no longer required to get a PCR swab.

Previously, anyone who tested positive to RAT had to get a proper viral swab to confirm their infection – but now will be treated as Covid positive without having to get further confirmation. 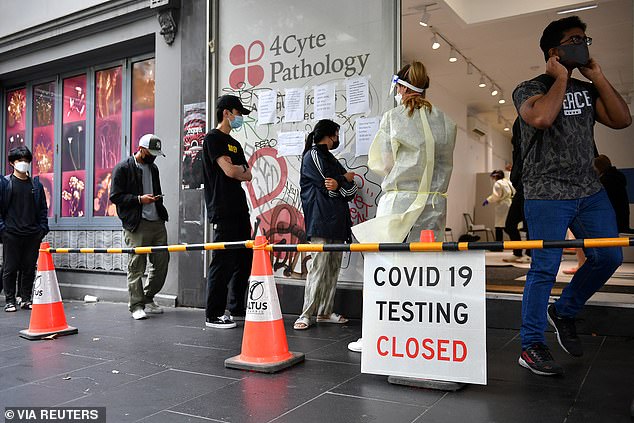 As announced on Wednesday, Australians who test positive on a rapid test will no longer have to get confirmation on a PCR swab

This change, confirmed by the Prime Minister, was made on Wednesday because of the pressures on the testing system caused by people seeking PCR swabs, which are more accurate but much more time-consuming and costly to process.

Those with the virus will still have to inform others they have spent time with as they could be potentially infected.

People who were with a positive person for four hours or more are ‘close contacts’ and must self-isolate for seven days. This includes people they live with – also known as ‘household contacts’.

If you test positive for Covid-19 – and/or if you are a close contact you need to self-isolate for seven days from the day you were tested.

You can only leave self-isolation after seven days if your symptoms have gone or in some states, if you have returned a negative RAT.

Meanwhile, in some positive news for Australians struck down with the virus, Infectious Disease Expert Professor Peter Collignon said the peak of Omicron infections could be reached in two weeks.

The new and highly-infectious strain was first detected in November in South Africa and has since run rampant across most parts of the world.

‘You look at England and South Africa it reaches a peak and goes up quickly and comes down. I think that we have a week or two to go,’ Professor Collignon told The Today Show.

Prof. Collignon said people gathering during the period between Christmas and the New Year had triggered infection levels that would ease in January.