New South Wales has recorded another 35,054 new Covid-19 cases and eight deaths while Victoria’s infections have climbed by 17,636 and 11 deaths.

Wednesday’s numbers in NSW are the highest daily total recorded for any Australian state and are a huge jump from the 23,131 infections announced on Tuesday.

There are now 1,491 Covid patients in NSW hospitals, up from the 1,344 reported a day earlier. Victoria’s hospitalisations are at 591, a jump from 516 on Tuesday.

ICU rates have slightly risen with 119 NSW residents now in intensive care, an increase of 14. ICU rates in Victoria have dropped by three to 53.

The new infections come as Scott Morrison is set to make a decision on subsidising rapid antigen tests for those on low incomes.

The plan, set for discussion at National Cabinet on Wednesday, will see welfare recipients and pensioners get cash payments for up to five rapid tests, or even more if states also put money on the table.

They would need to meet eligibility requirements to qualify for the subsidy.

The Prime Minister could also announce the government will provide millions of free RAT kits to be handed out at state and territory testing centres.

The national cabinet is meeting on Wednesday for the first time in 2022 to discuss community concerns around access to the kits, which have been difficult to source and have escalated in price.

Infectious diseases expert Professor Robert Booy said the proposed measures would go some way to alleviating pressure on testing clinics, but they should be made free for everyone.

‘We can’t have a system that doesn’t work, we need to be able to test people by PCR if they have got symptoms or if they are a very close contact,’ he told the Nine Network on Wednesday.

‘We need to do something and rapid antigen tests are the solution.’ 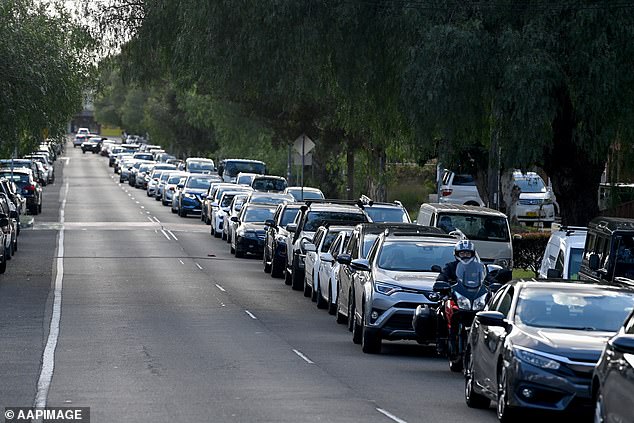 Wednesday’s numbers in NSW are the highest daily total recorded for any Australian state and are a huge jump from the 23,131 infections announced on Tuesday (pictured queue for Covid testing clinic in Sydney)

It comes after a Melbourne emergency physician accused the Federal Government of ‘painting a rosy picture’ of the Covid situation, adding that although Omicron was less severe than other strains, the surging number of cases means a significant number of people will still be hospitalised.

‘I am concerned about the government response if it paints too rosy a picture,’ he told The Project.

‘I don’t think the New South Wales health system is strong and going strong. I think it is facing challenges that have never been seen in my lifetime. We need to be honest to keep people’s confidence and trust in place.’

NSW alone has already seen hospitalisations surpass any previous point during the pandemic, however ICU cases remain well below the wave of the more severe Delta variant.

But Dr Parnis said because Omicron ‘spreads like wildfire’ there has been increased strain on testing clinics and community-based healthcare, rather than mounting cases in intensive care.

Many staff members are also being forced to isolate after either catching Covid or being deemed a close contact, putting a strain on already exhausted workers.

‘Things like ambulance call-outs, times to be seen in emergency. Inevitably the longer that those times blow out, the more likely an adverse outcome something like an avoidable death,’ Dr Parnis said.

Meanwhile tennis fans have erupted at the decision to grant Novak Djokovic a medical exemption against being vaccinated to play in the Australian Open.

The 20-time grand slam winner posted a picture of himself at an airport on Tuesday morning declaring that he was on his way to defend his title in Melbourne.

‘I’ve spent fantastic quality time with my loved ones over the break and today I’m heading Down Under with an exemption permission. Let’s go 2022!’ he wrote.

It comes after a months-long battle with the Victorian government, officials and event organisers that ended with the nine-time Australian Open champion being granted an exemption.

Australian Open organisers say the medical exemption was granted through a ‘rigorous review process’ that went via the Technical Advisory Group on Immunisation (ATAGI) guidelines.

But many Australians have now threatened to boycott the event.