Savings giant NS&I failed to consider if its controversial plan to axe Premium Bond prize cheques discriminated against the elderly and vulnerable, the Treasury admits.

National Savings & Investments had intended to start phasing out the popular payment method this month and instead credit customers’ bank accounts with the winnings directly or reinvest them.

But the Treasury-backed bank was forced to delay the move amid a backlash and customer service meltdown.

Backlash: NS&I had intended to start phasing out cheques this month but the Treasury-backed bank was forced to delay the move amid a backlash and customer service meltdown

It was a victory for Money Mail, which has repeatedly warned the change would alienate loyal older savers.

NS&I says it will allow the most vulnerable to keep getting prizes in the post. But only two have won through so far.

About three in ten prizes – more than 11.6 million – were paid by cheque this year.

Yesterday, MPs on the Treasury Select Committee demanded answers from NS&I after complaints rose 43 per cent.

Chairman Mel Stride, who has written to chief executive Ian Ackerley, says: ‘Whilst NS&I took steps to keep service levels up during the pandemic, they appear to have been unsuccessful. The decision to stop paying Premium Bond winners by cheque will be particularly concerning to vulnerable consumers.’

Campaigners are calling for the proposal to be scrapped.

Treasury minister John Glen admitted to MPs last week that NS&I had not done an equality impact assessment – often carried out to ensure a new policy or project does not discriminate on grounds of age, sex, disability or race.

This is despite more than seven million customers aged over 50 holding £81 billion worth of Premium Bonds. Of these, more than 820,000 are in their 80s and 90s, and have around £14.2 billion invested.

There are roughly 5.6 million under-50s who hold about £18 billion worth of bonds. The ages of 11 million other savers is not known.

Bridget Phillipson, shadow chief secretary to the Treasury, says: ‘Hundreds of thousands of Premium Bond holders are over the age of 80. Forcing this change upon those most vulnerable to Covid-19 is wrong. Older people are also the biggest investors in the Government’s national savings bank. This is no way to repay their loyalty.’

Charity Age UK has repeatedly warned that many older savers do not have access to the internet or do not want to manage their finances online, and rely on cash and cheques. 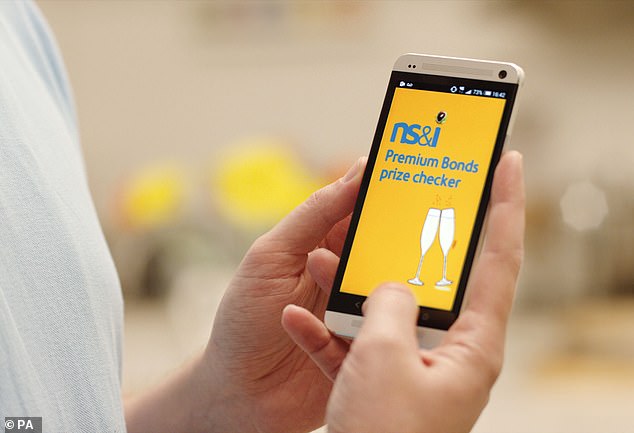 Customers in their 70s are the most frequent Premium bond winners, with 933,362 scooping prizes this year

Mr Glen says: ‘The department is committed to having a robust exceptions policy — allowing those vulnerable customers excluded from doing business through digital channels to opt for paper and phone channels.’

Call waiting times can be longer than an hour. And even if the prize money is paid into their bank account, they would still require a letter in the post informing them they had won as they do not bank online.

Mr Glen says that since March, 750,000 customers have switched to having prize money paid direct into their bank account or automatically invested.

As of December, 82.5 per cent of payouts were dealt with this way.

David Gooding, of law firm Irwin Mitchell, says the decision ‘put some people at a disadvantage, such as the elderly’ who are less likely to use the internet.

He adds: ‘If NS&I wants to reduce the number of misdirected cheques, they could achieve this by encouraging winners to receive prizes as a bank transfer, rather than phasing out cheques completely’.

Millions of savers signed up to receive their winnings in the post but have still not been informed of the change.

NS&I says it emailed 1.2 million customers in September and wrote to 992,000 prize winners in October and November.

The remaining 2.8 million were expected to find out in a newspaper, or through NS&I’s website.

Money Mail has sent copies of all your letters to NS&I boss Ian Ackerley.

But to ensure they have the maximum impact they must be recorded as formal complaints.

But if you didn’t provide an address or phone number it may be difficult to track you down.

To help, we have printed a template letter, below, that savers who want to keep receiving prizes in the post can send to Mr Ackerley.

An NS&I spokesman says: ‘All customers will be able to access their Premium Bonds prizes.

‘NS&I has a robust exceptions policy in place to ensure that we are inclusive and able to meet the needs of elderly, vulnerable and digitally excluded customers.’