‘One of the most frightening things I’ve seen on a footy field’: NRL fans and pundits react to Victor Radley’s sickening head injury as viewers slam broadcasters for keeping cameras rolling after Roosters star suffered from convulsions

The Sydney Roosters’ 18-14 win over the Melbourne Storm was marred by a sickening head injury to Victor Radley, who was knocked out cold while trying to make a tackle.

With just over eight minutes left in the game at AAMI Park on Friday night, Radley attempted to tackle Melbourne prop Jesse Bromwich but got his head in the wrong spot.

The Roosters star connected with Bromwich’s hip and Radley appeared to be out cold as he hit the turf.

In distressing scenes, the 24-year-old looked to be suffering from convulsions as the Roosters medical staff swiftly attended to him on the field.

An eerie silence descended on AAMI Park and Fox League’s cameras panned away from the scene as Radley was eventually stretched off the field by the medicos.

‘Victor Radley showed signs of convulsing/seizuring after suffering a concussion there,’ the NRL Physio account tweeted immediately after the Roosters forward was taken from the field.

‘Despite the graphic nature of the incident the presence of immediate convulsions is not associated with adverse results (via scans/recovery time) or risk of future seizures.’ 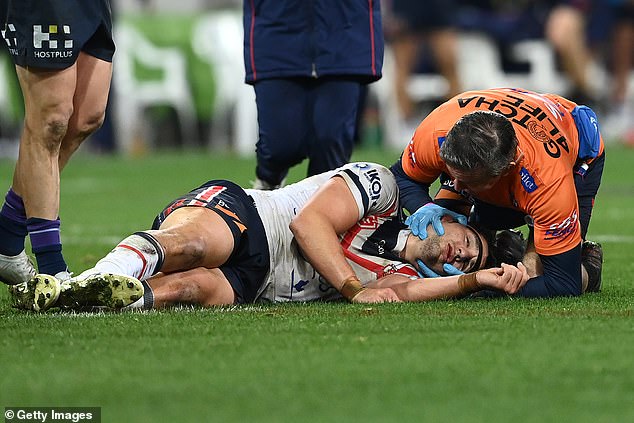 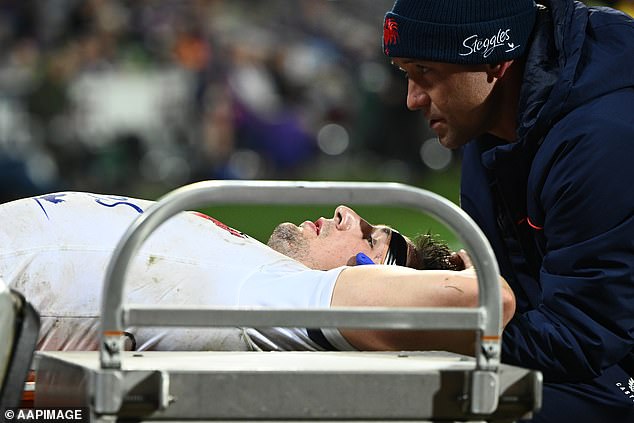 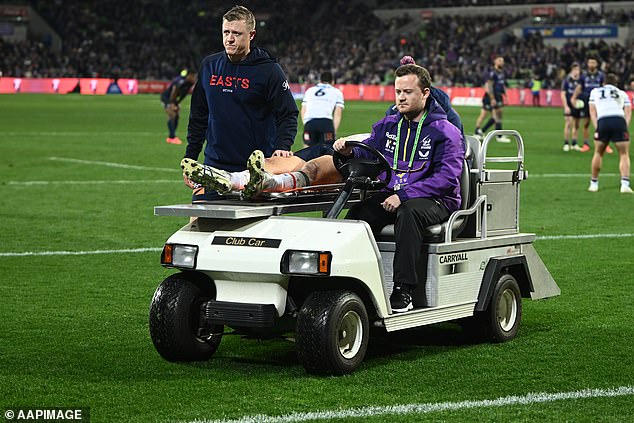 Radley appeared to recover quickly and Fox League reporter Lara Pitt noted he was speaking to doctors in the medical tent while being assessed.

The Rooster lock forward was then seen on the pitch after the final whistle, speaking and joking with teammates and talking to Roosters coach Trent Robinson back in the sheds.

Nevertheless, there’ll be concern over Radley, who suffered a big hit in the opening game of the season against Newcastle.

The Roosters are expected to rest him for the final game of the season against the Rabbitohs next week, in a bid to get him back in time for the finals. 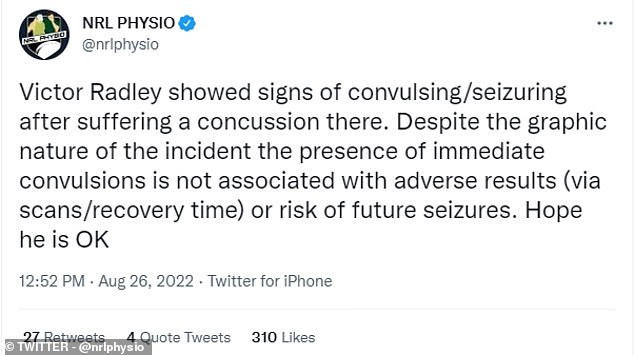 Radley’s injury and in particular the graphic nature of it left plenty of viewers in distress, including Fox League commentator Dan Ginnane.

‘Radley’s in trouble here,’ he said.

‘They’re going to have to stop play here. Oh dear, they are ugly pictures. These are disturbing scenes.’

Several others agree, noting the cameras could have panned away from the scene quicker than they did.

One viewer described it as the ‘most frightening things I’ve ever seen on a footy field’, while another added: ‘Seeing Victor Radley convulsing after that head knock was tough viewing.

‘Commentators have gone absolutely silent and ignored the obvious.’

Broadcaster Quentin Hull tweeted he’d been left ‘crook’ by the footage, while another viewer added: ‘Shame on the NRL camera guys. Victor Radley gets knocked out and starts convulsing and the cameras stay on him. Horrible to see.’