The 24-year-old, whose side was knocked out of the tournament with a loss to Samoa on Sunday, was reportedly involved in an altercation with Ireland international James Bentley.

Radley was part of a group of England players who returned to their Manchester hotel after their 27-26 semi-final defeat in London.

The Irish side, in which Leeds Super League forward Bentley featured, were knocked out of the tournament at the group stages. Bentley is believed to have been invited back to the hotel by a member of the England team.

‘The RFL have been made aware of allegations and are currently investigating the matter,’ the Rugby Football League said in a statement.

Radley was not the instigator, according to a report in the Sydney Morning Herald, although the forward has found himself in hot water for a number of off-field incidents in recent years.

Radley was allegedly sticking up for England coach Shaun Wane after he was abused by Bentley, according to a tweet from Sydney Morning Herald reporter Michael Chammas, who reported that Radley headbutted the Irishman, who needed stitches.

The publication was also told it is believed England footballers knocked on the hotel doors of Samoan players in the middle of the night before running away.

The Samoan team made a complaint about the incident, which occurred at 1.30am.

Two other well-known England players are alleged to have been involved in a brawl at their team hotel. 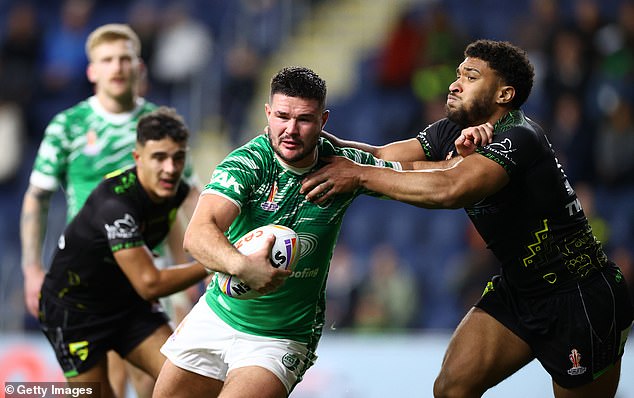 Earlier this season Radley was summoned to speak with NRL chief executive Andrew Abdo after making a lewd gesture on television.

He was also investigated by the NRL’s integrity unit after being thrown off a Sydney to Gold Coast flight last year and following an altercation in Byron Bay over Christmas 2020.