Brisbane Broncos NRL star Anthony Milford has been arrested after an alleged assault in Fortitude Valley, Brisbane overnight on Monday.

Milford, 27, was arrested at 2am and charged with three counts of assault occasioning bodily harm and one count of wilful damage.

Police were called to an address in Marshall Street following reports of a disturbance, allegedly involving his partner Miri Fa’i and bystanders who intervened.

Police then launched a manhunt in surrounding streets for the NRL star and later found Milford nearby and arrested him.

It’s understood the three assault charges relate to alleged attacks on three different people, including his partner, the mother of his two year old daughter.

A nearby nightclub, Ella Sabe, on the corner of Marshall Street, refused to comment on the incident on Monday.

‘He was charged with three counts of assault occasioning bodily harm, and one count of wilful damage,’ said a Queensland Police spokesman.

‘He was given police bail to appear in the Brisbane Magistrates Court on October 20.’

The highest paid player in Broncos history was a proud dad after he fathered a baby girl with Ms Fa’i when Ariana Eve Milford was born on Christmas Eve 2018.

‘A whole new meaning to my life. I love you princess Ari,” mum Ms Fa’i posted on Instagram at the time.

Milford added: ‘Easily the best day of my life, welcoming my little princess Ariana Eve Milford to the world. Our hearts are filled with so much love and happiness

‘Mum and bubby both recovering nicely. Damn! Big respect to all the mothers that go through what they do!’ 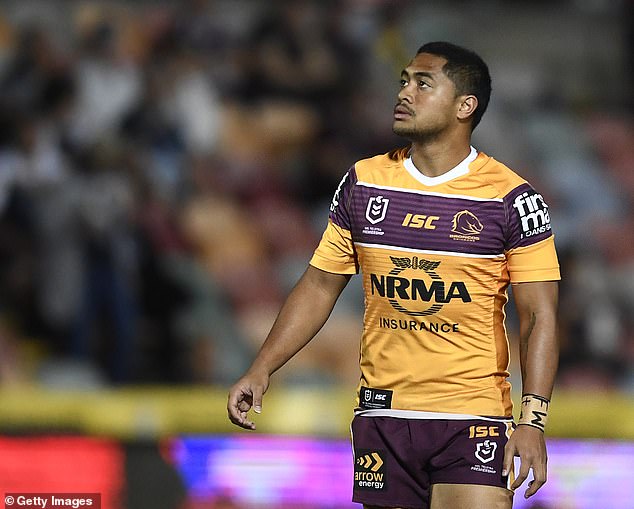 Police found Anthony Milford, 27, (pictured) in a nearby street where he was arrested at 2am and charged with three counts of assault occasioning bodily harm and one count of wilful damage

Milford, who lives in Brisbane’s Forest Lake, is set to move to South Sydney Rabbitohs next season after the Broncos chose not renew his $1million deal.

His former club distanced themselves from the player in the wake of his arrest on Monday.

‘Anthony Milford has completed his contractual duties with the Brisbane Bronco,’ said a Broncos statement.

‘He is on leave and due to begin a new NRL contract elsewhere at the commencement of the 2022 pre-season.

‘As the matter is now before the courts, the Broncos will make no further comment.’