The 2023 State of Origin series could be played across three consecutive Wednesday nights in a bombshell move by the NRL.

While the fixtures aren’t set in stone, the game’s CEO Andrew Abdo and Australian Rugby League Commission chairman Peter V’landys will be chatting to the NRL clubs about any potential changes over the next few months.

The mooted schedule changes are due to the NRL’s new broadcast deal with Channel Nine, which begins next year.

Eyebrows have already been raised after it was recently announced the Representative weekend –  featuring Pacific Nations such as Tonga, Papua New Guinea and Fiji – will be scrapped.

It remains to be seen if the highly popular games – played as a lead-up to Origin game two last month – will feature on the rugby league calendar in Australia and New Zealand next year.

The 2023 State of Origin series could be played across three consecutive Wednesday nights in a bombshell move by the NRL (pictured, NSW fullback James Tedesco and Queensland’s Cameron Munster) 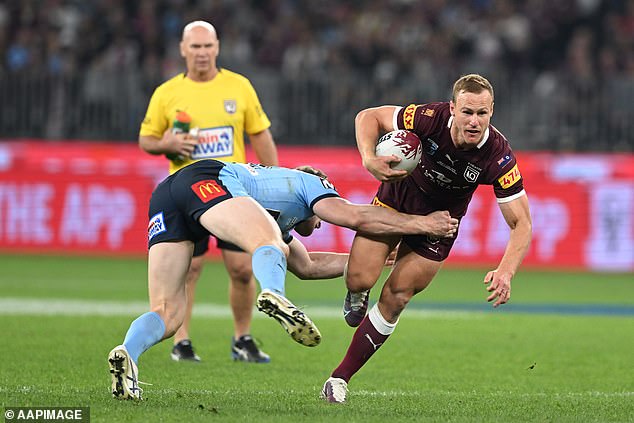 The mooted schedule changes are due to the NRL’s new broadcast deal with Channel Nine, which begins next year (pictured, Queensland halfback Daly Cherry-Evans)

With Origin a guaranteed TV ratings bonanza, the NRL and Nine will make the famous interstate rivalry between NSW and Queensland their chief priority.

Revenue generated from the series is also significant.

This year the three games have been spread out – the series opener was in Sydney on Wednesday June 8, the second in Perth on Sunday June 26, with the decider on Wednesday at Brisbane’s Suncorp Stadium.

In 2020 Covid meant the Origin series was played across three consecutive Wednesdays at the conclusion of the NRL season.

After consulting with NRL clubs, the draw will be released later this year for all 2023 fixtures.

There is also a school of thought that the landscape of Origin is changing – gone are the days where the interstate rivals traded fierce barbs.

Star Queensland five-eighth Cameron Munster has been ruled out due to a positive Covid test, robbing fans of arguably the game’s best player in an Origin decider.

Privately, NSW would have been rubbing their hands with glee, but publicly, they won’t utter a word about Munster not playing.

Late last month, Game II in Perth passed the three million viewer mark across all of  Nine’s channels, making it the highest-rating Origin since game one back in 2019.