Using your smartphone doesn’t necessarily make you forgetful — it could actually have the opposite effect, experts say.

A study of nearly 160 adults failed to stack up the ‘use it or lose it’ memory theory.

Instead, the memories of volunteers proved stronger when they were allowed to set reminders on their phone.

‘But we need to be careful that we back up the most important information.’

Scientists have long warned that relying too much on technology to remember phone numbers, appointments and shopping lists could cause brain function to deteriorate. But a study of more than 150 Britons failed to stack up the ‘use it or lose it’ theory, instead showing that people’s memory was better when they set reminders 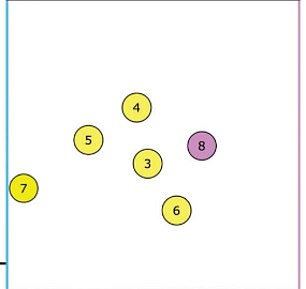 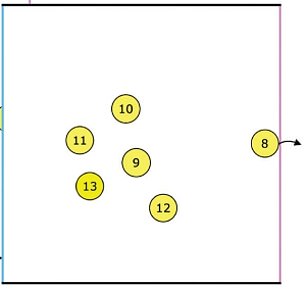 A team from University College London created a memory test on a touchscreen Samsung Galaxy tablet, which was completed by 158 people aged 18 to 71. The volunteers were shown numbered circles within a box, which initially appeared in a colour corresponding to one side of the box before fading to yellow (left). Participants had to drag the numbers, in order from 1 to 12, to the side of the box that matched their initial colour (right)

HOW CAN I IMPROVE MY MEMORY?

Convince yourself that you have a good memory that will improve

Too many people get stuck here and convince themselves that their memory is bad, that they are just not good with names, that numbers just slip out of their minds for some reason. Erase those thoughts and vow to improve your memory.

The brain is not a muscle, but regularly ‘exercising’ the brain actually does keep it growing and spurs the development of new nerve connections that can help improve memory.

By developing new mental skills —especially complex ones such as learning a new language or learning to play a new musical instrument — and challenging your brain with puzzles and games you can keep your brain active and improve its physiological functioning.

Regular aerobic exercise improves circulation and efficiency throughout the body, including in the brain, and can help ward off the memory loss that comes with aging. Exercise also makes you more alert and relaxed, and can thereby improve your memory uptake, allowing you to take better mental ‘pictures.’

Chronic stress, although it does not physically damage the brain, can make remembering much more difficult. Even temporary stresses can make it more difficult to effectively focus on concepts and observe things. Try to relax, regularly practice yoga or other stretching exercises, and see a doctor if you have severe chronic stress.

The memory test, performed on a Samsung Galaxy tablet, involved 158 people aged 18 to 71.

The volunteers were shown numbered circles within a box, which had different coloured sides.

The circles initially appeared in a colour before fading to yellow.

Participants had to drag the numbers, in order from one to 12, to the side of the box that matched their initial colour.

The number of circles they remembered to drag to the correct side determined how much they were paid for taking part.

One side of the square was marked as ‘high value’, worth 10 times more cash.

The group each performed the task 16 times.

They had to use their own memory for eight rounds, but set reminders for the other eight tries.

Participants did this by immediately dragging circles near to the correct side of the box they would eventually be dragged into. The experts said this was the equivalent of leaving an object needed for tomorrow by the front door.

The results, published in the Journal of Experimental Psychology: General, show that when the volunteers were allowed leave reminders, their memory improved by 18 per cent.

Dr Gilbert, a neuroscientist at UCL, said: ‘We found that when people were allowed to use an external memory, the device helped them to remember the information they had saved into it.

‘This was hardly surprising.’

But the results also showed their memory for low-value circles was 27 per cent better, even among those who didn’t make notes for those.

Dr Gilbert added: ‘This was because using the device shifted the way that people used their memory to store high-importance versus low-importance information.

‘When people had to remember by themselves, they used their memory capacity to remember the most important information.

However, the results also showed that there may be a cost of using reminders.

Dr Gilbert added: ‘If a memory tool fails, we could be left with nothing but lower-importance information in our own memory.’

He noted that the findings dispute the notion of ‘digital dementia’.

Some neuroscientists have warned that failing to engage memory — such as by opting to write down tasks or use GPS maps — will cause it to get much worse.

This will lead people to use tech even more and could lead to a surge in dementia cases, some scientists say.