‘Now it’s illegal to SWEAT!’: Jogger claims he was given £120 fixed penalty fine by overzealous ‘Covid marshal’ for perspiring to much while waiting to cross the road

A runner has been fined £120 by a ‘Covid Officer’ for sweating during his jog.

Mark Meghezzi, 30, said he had been targeted by one of the London Borough of Hounslow workers on Tuesday.

The university management graduate, originally from Aberdeen, said he had been resting in Chiswick after a vigorous dash when he was spotted.

Mr Meghezzi had been sweating heavily and blew from his mouth to get the perspiration off his face.

But he said an officer said he thought he had been spitting and issued him with a fine.

Council leaders said the person who fined him had been an Enforcement Officer who had acted under anti-littering regulations.

The alleged wrongdoing – which is denied by Mr Meghezzi – falls under Environmental Protection Act regulations, something now considered more important during Coronavirus times.

Mr Meghezzi wrote online: ‘Is this really what it has come to?

‘Sadiq Khan I can’t imagine this is how you intended these resources to be deployed.

‘I received a fine from Sadiq Khan’s London Borough of Hounslow for doing nothing more than going for a run down Chiswick High Road.

‘I paused at Turnham Green Terrace and went down on my haunches (it was a tough one) and waited for the traffic lights to turn green.

‘As I did so, naturally the sweat poured off me and I blew some away from my lip, towards the road. This is natural and unavoidable when running 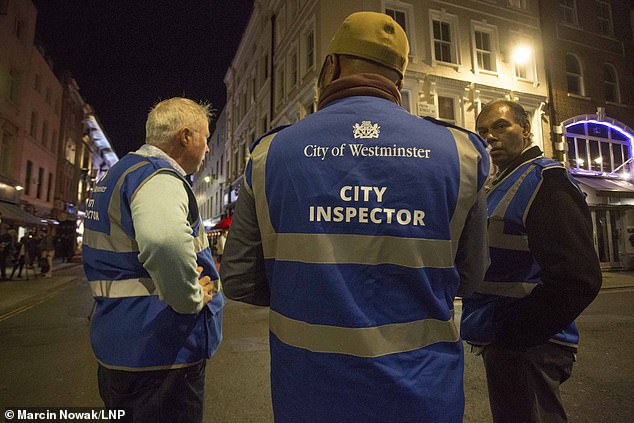 City inspectors in Westminster have been looking for coronavirus rules breaches

Marshal law: What powers do Covid officers have?

Covid marshals were announced by Boris Johnson for towns and city centres in England.

They are either volunteers or existing members of council staff.

Leeds and Cornwall are known to have them too and they offer advice about the rules and how to obey them.

In London environment and enforcement officers as well as city inspectors sometimes carry out similar roles.

They have powers to issue on the spot fines and penalty notices to alleged rulebreakers.

Volunteer Covid marshals do not have the same powers

‘I was then accosted by a very excited young ‘Covid Officer’ who advised me that I had been ‘observed spitting’ and who then very eagerly issued me with the £120 FPN in the picture.

‘I stood back (mostly in shock) after receiving the FPN from this ‘officer’.

‘I observed him repeat his truck twice more with passing joggers and cyclists, stopped at the lights.

‘Needless to say this FPN will not be being paid and a complaint has been raised against the individual for their conduct in issuing it.’

‘The Fixed Penalty Notice was not given for any Covid offence or sweating, and nor was it issued by a Covid marshal. The notice was issued by an Enforcement Officer for spitting, which is a littering offence.

‘Officers tackle a wide range of offences to tackle environmental and anti-social behaviour to support the local community. All of our officers are provided with body-worn cameras that capture interactions between staff and members of the public. Details of why a Fixed Penalty Notice was issued is provided on the notice along with details of a representative process that allows for notices to be reviewed.’

Spreading coronavirus via spit is thought to be possible because it could contain matter from the nose or lungs.

Running websites advise joggers try to be careful not to do it when they are out exercising.

But sweat is safe, as consultant virologist Chris Smith told LBC in March.

He said: ‘The site in which the virus grows is the respiratory tract so that means the nose and throat to a lower extent and the lungs to a greater extent. That’s why coughs and sneezes in this context spreads diseases.

‘As sweat is made in sweat glands and sweat glands make the sweat by filtering the liquid bit, the watery bit, away from blood, they’re not in direct contact with the source of the virus – because this virus does not to an appreciable level go round in the blood stream.’

‘Therefore there should be only limited amounts of the virus in sweat for that is not a means of transmission.’