Elon Musk has now turned his ire on YouTube.

On Tuesday, the richest man in the world tweeted, ‘YouTube seems to be nonstop scam ads,’ followed by a meme poking fun at the Google-owned video platform for allegedly not cracking down on the deceptive schemes.

Users on YouTube, which boasts 122 million daily viewers, according to Omnicore, can find examples of these scams throughout the website, often featuring the image of a celebrity or influencer promising free money or products through giveaways, Business Insider reported.

More often than not, the links lead to phishing scams sent out by bots designed to dupe them out of their money and personal information.

Google did not immediately respond to DailyMail.com’s request for comment.

In a statement regarding its policies on scams, Google said: ‘YouTube doesn’t allow spam, scams, or other deceptive practices that take advantage of the YouTube community. 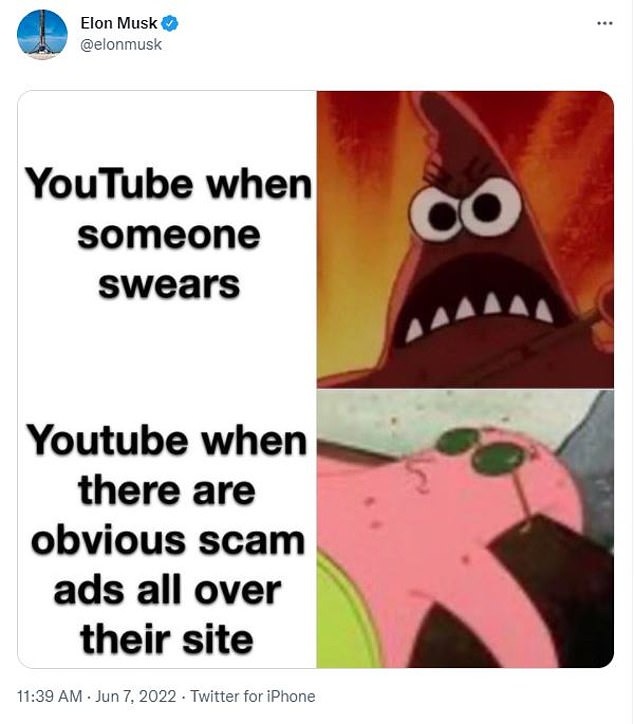 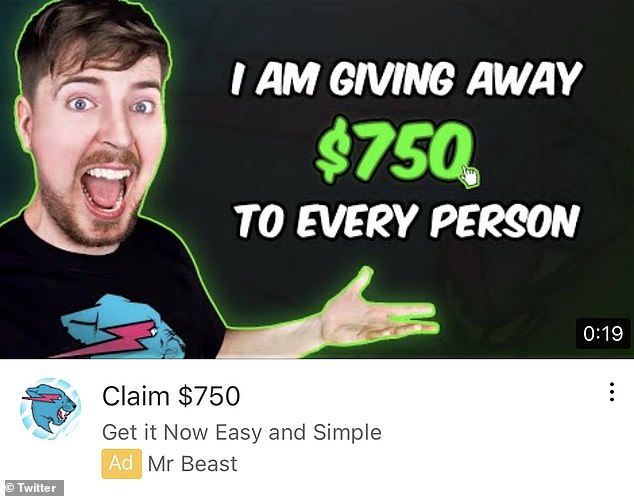 Many ads work as phishing scams looking for users’ personal information. One such ad going around recently involved a fake ad of Mr. Beast, a popular YouTuber who often gives out money as rewards in his video challenges

He accused the social media company of thwarting his right to know what percentage of their users base was comprised of bots or fake accounts.

So-called bots are automated accounts that send tweets, follow users and like and retweet others’ posts, but are not associated with any single real-life user.

Twitter has disclosed its bot estimates to the U.S. Securities and Exchange Commission for years, while also cautioning that its estimate might be too low.

Twitter has warned it will force Musk to go through with the deal after he threatened to bail on the deal, which included a clause that he pay the social media platform a $1 billion breakup fee if it falls through.

Texas Attorney General Ken Paxton also revealed Monday that he was launching an investigation into Twitter for ‘potentially misleading Texans on the number of its ‘bot’ users.’

Paxton argued he has a duty to protect Texans from the company if it is indeed misrepresenting bot data in an effort to drive up revenue. Musk became a resident of Texas in December 2020.

The social media network claimed earlier in the spam account battle it had submitted all necessary details but Musk dismissed it as just the methodology on finding bots.

Monday’s filing is not the first time Musk has threatened to pull the blockbuster deal, with it being ‘temporarily put on hold’ last month while he looked into fake accounts.

He claimed spam bots could make up at least half of Twitter’s users, which is more than 10 times the company’s official estimate.

He also tweeted last month he ‘cannot move forward’ with the purchase until he is provided the requested data.

The bot problem also reflects a longtime fixation for Musk. In April he promised to ‘defeat the spam bots or die trying’

Meanwhile Musk’s other ventures – SpaceX and Tesla – have been battered by his Twitter acquisition, with stocks plummeting amid fears he cannot juggle the work.

Last month, Musk said he wanted to pause on the purchase deal to verify false or spam accounts represented fewer than 5 percent of the company’s 229 million users during the first quarter, as Twitter reported.

If Twitter’s reporting was accurate, that would mean that there are fewer than 11.4 million fake accounts that are targeted for ads.

The billionaire said he and his team wanted to conduct their own audit of 100 Twitter followers to check how many are bots and spam accounts.

In Monday’s letter to Twitter, Musk stated if the company is ‘confident’ in its published spam estimates, he ‘does not understand’ the company’s reluctancy to allow him to ‘independently evaluate those estimates.’

‘As Twitter’s prospective owner, Musk is clearly entitled to the requested data to enable him to prepare for transitioning Twitter’s business to his ownership and to facilitate his transaction financing. To do both, he must have a complete and accurate understanding of the very core of Twitter’s business model—its active user base,’ the letter stated.

‘In any event, Musk is not required to explain his rationale for requesting the data, nor submit to the new conditions the company has attempted to impose on his contractual right to the requested data.’

The bot problem also reflects a longtime fixation for Musk, one of Twitter’s most active celebrity users, whose name and likeness are often mimicked by fake accounts promoting cryptocurrency scams.

The billionaire appears to think such bots are also a problem for most other Twitter users, as well as advertisers who take out ads on the platform based on how many real people they expect to reach.

However, some analysts speculate Musk is actually seeking the spam data in an effort to negotiate a lower price for the deal or pull out completely.

The Twitter sale agreement allows Musk to get out of the deal if there is a ‘material adverse effect’ caused by the company.

It defines that as a change that negatively affects Twitter’s business or financial conditions.

Financial experts claim Musk can’t unilaterally place the deal on hold, although that hasn’t stopped him from acting as though he can.

If he walks away from the merger agreement, Musk could be on the hook for a $1 billion breakup fee.

Though Twitter’s board agreed to the purchase in April, it still has not been approved by shareholders, and is not expected to close for at least several months.

In fact, late last month, a proposed class-action suit was filed against Musk and Twitter over the Tesla CEO’s acquisition of the platform.

The suit claims Musk benefited financially by delaying to disclose his stake in the platform and by ‘temporarily concealing’ his initial plan to become a board member. Musk ultimately declined the offered board seat.

The complaint, which was obtained by CNBC, also states Musk bought Twitter shares while knowing insider information about the company based on private conversations with board members and executives.

Musk revealed his stake in Twitter on April 4 and 10 days later proposed his $44 billion buyout.

He has sold a significant chunk of his Tesla shares in an effort to secure funding for the deal.