Council tax may have to increase for millions of households in 2022 to pay for social care despite Boris Johnson’s manifesto-busting raid on national insurance, ministers fear.

Town halls will likely need additional funding due to most of the money raised from the 1.25 per cent NI increase set to go to the NHS over three years before it is diverted into social care in 2024.

Families would then be left facing a ‘double whammy’ of tax increases in April next year, with some ministers now believing council tax rises of around five or six per cent on average will be levied to plug the gap, The Telegraph reports.

Some Tory MPs now worry they will meet upset local party members when they return from Westminster to their constituencies for the first time since the tax hike was passed through the Commons.

A government source said: ‘There will be pressure but that is one of a number of factors. Some of the others are looking more positive than councils were telling us six months ago.’

Town halls will likely need additional funding due to most of the money raised from the 1.25 per cent NI increase set to go to the NHS over three years before it is diverted into social care in 2024 (pictured: Boris Johnson) 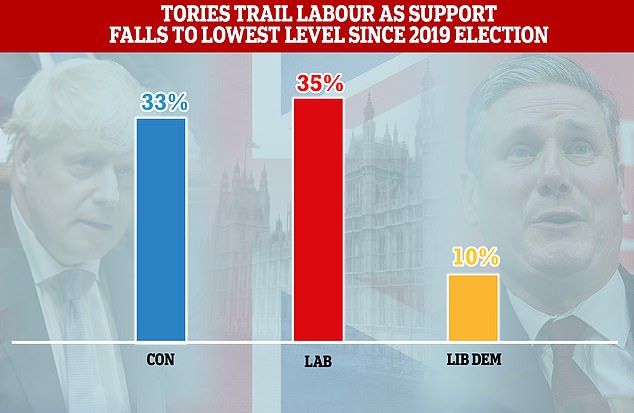 Conservative support plummeted five points to 33 per cent while Labour’s share increased by one point to 35 per cent, putting Sir Keir Starmer’s party ahead of the Tories for the first time since January 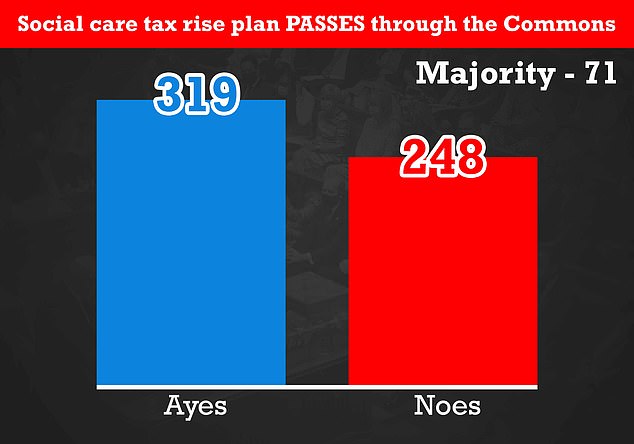 The House voted by 319 to 248 in favour of the 1.25 percentage point increase in NI contributions amid deep unhappiness among many Conservative MPs

By Daniel Martin, Policy Editor for the Daily Mail

Suggestions that the social care cap will help Londoners more than Northerners may put the Tories’ Red Wall seats at risk, the party was warned last night.

Homeowners in the North face losing three times more of their assets than families in the capital – while those in the Midlands will lose twice as much – according to an analysis.

It adds to concerns that the proposals will do little to prevent people having to sell their homes.

On Tuesday the Prime Minister unveiled his care plan, which will see a lifetime cap of £86,000 on care costs – paid for by a 1.25 percentage point increase in National Insurance. A poll published yesterday – showing Labour ahead of the Conservatives for the first time since January – has caused jitters in the Tory ranks.

The YouGov survey found Sir Keir Starmer’s party on 35 per cent – two points ahead of the Tories on 33 per cent.

This is the Conservatives’ lowest rating since the 2019 election. Last week the Health Foundation think-tank suggested the care cost cap could actually benefit those living in the North.

This is because, under the current system where people face unlimited care costs, northern homeowners pay more as a proportion of the value of their home than those in the South. They said this difference would be lessened if a cap was imposed.

But the new analysis, compiled by Labour, looked at average house prices in each constituency to see how far the £86,000 cap will protect the value of someone’s home. It showed that property-owners in the North could face care costs up to three-fifths of their assets including the value of their home.

But the Culture Secretary dismissed the poll, saying he believed voters will ‘ultimately recognise’ that the tax rise was necessary. Oliver Dowden said: ‘Finally the Prime Minister has actually done something about this… The electorate reward governments who are willing to take difficult decisions in order to protect the long-term national interest.’

One senior minister said the idea of council tax bills increasing was a ‘worry’, adding: ‘At the end of it all, people are going to ask themselves do they want the Government to level with them and be honest or do they want a government that wrings its hands and does nothing.’

Ministers have been trying to quell Tory panic as a poll showed support slumping amid the massive £12billion national insurance raid.

The 33 per cent support is the lowest level since the election in 2019. Two-thirds said they do not believe keeping taxes low is a priority for Boris Johnson of his party.

Labour was in the lead for the first time since January with 35 per cent – although in a more optimistic sign for the Tories Keir Starmer only managed to soak up one extra point.

Sir Keir Starmer is now expected to use a speech at a summit for Labour leaders in local government to set out his stall for the reform of social care.

Sir Keir will be speaking after a week in which the Government unveiled manifesto-busting plans to raise national insurance in order to clear the NHS backlog and fix the social care crisis.

But Labour has been criticised, including by those inside the party, for not presenting an alternative while slamming Boris Johnson’s plans.

At the LGA Labour Leaders’ Summit on Saturday, where Sir Keir is attending in person, he is expected to say that Labour would ‘ask those with the broadest shoulders to carry the burden’.

He will say: ‘Labour’s aim isn’t just to ‘fix the crisis in social care’ – as the Prime Minister has repeatedly promised but failed to deliver. Instead, Labour’s vision for social care is to ensure all older and disabled people get the support they need to live the life they choose.’

He is expected to outline how this would include a shift to prevention and early intervention for those with care needs, and a preference for keeping them at home.

He will say that Labour would ‘champion independent and fulfilling lives for working-age adults with disabilities – so people have choice and control over the support they get, and their views drive change in the system’.

Sir Keir will promise a ‘new deal’ for care workers and unpaid carers.

He will say that by comparison, the Government plan is ‘a rushed out, half-baked, mess that won’t give social care the resources needed, won’t actually reform social care, won’t create more and better-paid jobs, isn’t fair across the regions or generations, and won’t stop people selling off their homes to fund care’.

Sir Keir will appeal to local authorities as he will suggest the PM’s proposals will force them to raise council tax as they will not receive any extra cash.

He will add: ‘This is an unfair plan that doesn’t work. And who is left with the bill? It’s working people. It’s especially low earners and young people who have already borne the brunt of the economic impact of the pandemic.’