By Maisie Dillon For The Mail On Sunday

The so-called ‘Deppford wives’ – some as young as ten – have flooded the social media platform over the course of the six-week defamation trial, with the clips racking up billions of views between them.

The videos, shared under the title ‘#JusticeForJohnny’, accuse Miss Heard of being a narcissist and – in an attempt to undermine her domestic abuse allegations against the Pirates Of The Caribbean star – claim that she is faking her distress in court.

The young cyber-bullies regularly refer to the 36-year-old as ‘Miss Turd’, while hundreds of accounts are dedicated to setting clips of her tearful testimony to the Cliff Richard song Devil Woman.

Depp, 58, is portrayed in the clips as a loveable hero thanks to his appearances in children’s films such as Charlie And The Chocolate Factory and Alice In Wonderland. He has also garnered a fresh generation of fans thanks to his model daughter Lily-Rose’s well-publicised relationship with up-and-coming actor Timothée Chalamet.

Other videos collate favourite moments of Depp from the trial or show fans dressed in the actor’s iconic Captain Jack Sparrow costume from Pirates Of The Caribbean. 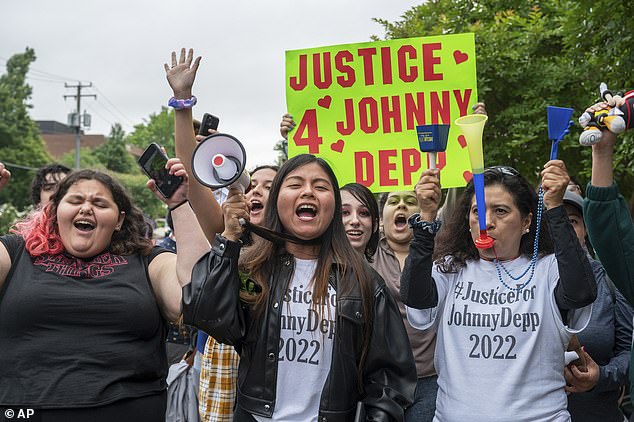 On Friday, Miss Heard told a court in Fairfax, Virginia, of her ‘agonising’ suffering at the hands of internet abusers, including daily death threats against her and her child. She said one online troll had even threatened to put her one-year-old daughter ‘in a microwave’.

Depp is suing his ex-wife for $50 million (£40 million) over a column she wrote in the Washington Post describing herself as a ‘public figure representing domestic abuse’. She then counter-sued for $100 million, claiming ‘smears’ from his lawyers had left her a ‘pariah’.

Jurors will return on Tuesday to continue their deliberations.