Novavax today revealed its Covid vaccine is 90 per cent effective at preventing people from catching the virus.

The American biotech firm said the two-dose jab, of which Number 10 has ordered 60million doses, also stopped up to 100 per cent of people becoming moderately or severely ill.

Phase three trials involved nearly 30,000 participants across 113 sites in the US and six in Mexico, with half given a placebo and others the real vaccine.

Only 14 participants who had been given the jab caught Covid compared to 63 per cent in the placebo group, resulting in an overall efficacy of 90.4 per cent.

The vaccine also appeared to be safe and well-tolerated, with the most common side effects being fatigue, headache, muscle aches and pain at the injection site. They typically lasted no more than two or three days.

Novavax claimed its vaccine worked well on the world-dominant Kent variant but the study did not look at its impact on the Indian strain currently sweeping the UK.

The company plans to seek approval in the UK, US, Europe and elsewhere by the end of September and be able to produce up to 100million doses a month by then.

So far four vaccines have been approved by Britain’s regulator — made by Pfizer, AstraZeneca, Moderna and Johnson & Johnson.

Britain already has enough doses on order from those vaccines alone to vaccinate the entire nation multiple times over.

But officials anticipate ‘booster’ shots will need to be given annually to the elderly and vulnerable because immunity wears off quicker in those groups. 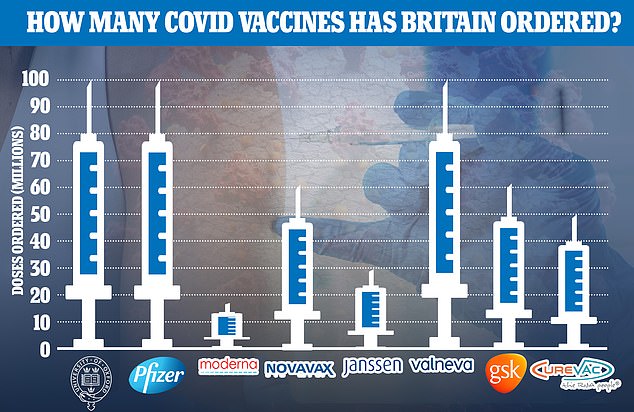 Britain has ordered more than 500 million doses of the most promising vaccines, enough to vaccinate the population many times over

Novavax’s study involved 29,960 participants aged 18 and above. Two-thirds received two doses of the vaccine, three weeks apart, and the rest got a placebo.

There were 77 cases of Covid-19 – 14 in the group that got the vaccine and the rest were in volunteers who received dummy shots.

None in the vaccine group had moderate or severe disease, compared to 14 in the placebo group.

All of the cases in the vaccinated cohort were defined as ‘mild’, while 10 in the unvaccinated group were considered ‘moderate’ and four ‘severe’.

Novavax said its recruited participants that represented groups most impacted by the disease, including elderly people and those from poorer backgrounds.

Gregory Glenn, president of research and development at Novavax, said: ‘Our vaccine will be a critical part of the solution to and we are grateful to the study participants and trial staff who made this study possible, as well as our supporters, including the US government.’

Novavax has said its priority will be to supply first doses to low and middle-income countries.

Less than 1 per cent of people in the developing world have had one Covid-19 vaccine dose, according to Oxford University research team Our World In Data.

Leaders at the G7 summit yesterday committed to providing 1billion vaccine doses to impoverished nations over the next year.

But the pledge was criticised by charities for being far short of the 11bn jabs the World Health Organization says are needed to end the pandemic.

British pharmaceutical giant GlaxoSmithKline will support the manufacturing of up to 60m doses of the Novavax jab in the UK.

In a deal announced in late March, GSK will ‘fill and finish’ supplies of the American jab at its factory in Durham starting from May.

The GSK deal means the Novavax jabs will not have to leave the UK. The raw chemicals are being produced at a site in Stockton-on-Tees, but the original plan was for the vials to be prepared and packaged in Europe.

The Novavax jab differs from those already being used in the UK. It combines a genetically engineered protein that causes a weakened version of Covid with a plant-based ingredient to help generate a stronger immune response.

Novavax says people should be given two doses of the vaccine, three weeks apart. The vaccine, officially named NVX-CoV2373, can be stored in a regular medical fridge.

The GSK site at Barnard Castle is a specialised facility in global manufacturing network which supports production of GSK pharmaceutical and vaccine products.

The protein antigen component of NVX-CoV2373 is also produced in the North East of England by Novavax’s manufacturing partner, FUJIFILM Diosynth Biotechnologies, at their site in Billingham, Stockton-on-Tees.

Novavax coronavirus vaccine – everything you need to know

The Novavax vaccine works like other vaccines by teaching the immune system to make antibodies to the coronavirus spike protein.

Researchers inserted a modified gene into a virus, called a baculovirus, and allowed it to infect insect cells.

Spike proteins from these cells were then assembled into nanoparticles which, while they look like coronavirus, cannot replicate or cause Covid-19.

These nanoparticles are then injected into the body via the vaccine where the immune system mounts an antibody response.

If the body encounters coronavirus in the future, the body is primed to fend it off.

The vaccine is given as two doses.

Are there advantages of the Novavax vaccine?

Yes. While the jabs from Pfizer/BioNTech and Moderna need to be kept at ultra-low temperatures, the Novavax jab is stable for up to three months in a normal fridge.

How effective is the vaccine?

According to results of phase three trials, the jab offers 100 per cent protection against severe disease, including all hospital admission and death.

Where is it made?

The protein antigen component of the vaccine is produced in the North East of England by Novavax manufacturing partner, Fujifilm Diosynth Biotechnologies, at its site in Billingham, Stockton-on-Tees.

GSK announced on Monday that it will provide ‘fill and finish’ manufacturing capacity – preparing vials of the final vaccine and packaging them for distribution and use – at its Barnard Castle facility, also in the North East, beginning as early as May.

It said the ‘rapid technology transfer’ between the two companies will begin immediately.

Has the Novavax vaccine been approved?

Not yet. A rolling review is under way by the (Medicines and Healthcare products Regulatory Agency) MHRA to assess the vaccine.