Novavax has begun a large late-stage study of its experimental COVID-19 vaccine in the U.S., the drug developer said on Monday, after delaying the trial twice due to issues in scaling up the manufacturing process.

It will enroll up to 30,000 volunteers across about 115 sites in the United States and Mexico, with two-thirds of them receiving the shot 21 days apart and the rest getting placebo, the company said.

Novavax lags behind other drugmakers in the global race for COVID-19 vaccine, with shots from Pfizer and Moderna authorized for emergency use in the United States.

But experts have said more than one vaccine would be needed to end the pandemic that has killed over 1.7 million people globally.

And Novavax’s shot could be a key player in vaccinating people in rural or poor areas because it only needs to be stored at refrigerator temperatures, unlike Pfizer’s and Moderna’s vaccines, which have to be frozen (at ultracold temperatures, in Pfizer’s case).

Novavax announced on Monday that it is ready to start recruiting 30,000 volunteers in the U.S. and Mexico to its late-stage trial of its coronavirus vaccine (file)

Novavax has signed supply agreements with several countries and is set to provide 60 million doses to the UK, where a late-stage study is under way.

The interim data from the trial is expected in the first quarter of 2021.

Novavax did not announce a projected completion date for its phase 3 U.S. trial.

Other companies took months to complete recruitment for their trials – a process that was protracted for Pfizer and Moderna because they further expanded the size of the trials to include more diverse participants.

Now that two vaccines have been deemed safe and effective enough for emergency FDA approval, potential participants may be less wary of the Novavax’s trial than they were of earlier ones.

On the other hand, with two vaccines authorized in the U.S. and distribution to at-risk health care workers and nursing home residents underway, Americans may have less incentive to join the trial, in which they could get a shame shot instead of the real one. 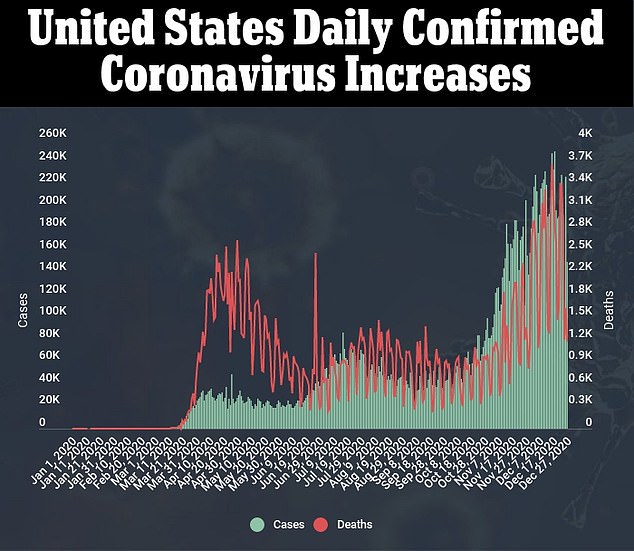 Instead of randomly giving half the participants that vaccine and half the placebo, Novavax will give real shots to two-thirds of participants.

The firm also promised not to prevent participants from getting authorized vaccines if they become eligible for them.

‘We recognize that volunteers considering our trial may have questions about the potential impact on their ability to receive an authorized vaccine when it becomes available to them,’ said Dr Gregory Glenn, president of research and development for Novavax.

‘We wish to reassure participants that we are working to ensure that their involvement in our trial does not negatively impact their ability to be vaccinated at the appropriate time.’ 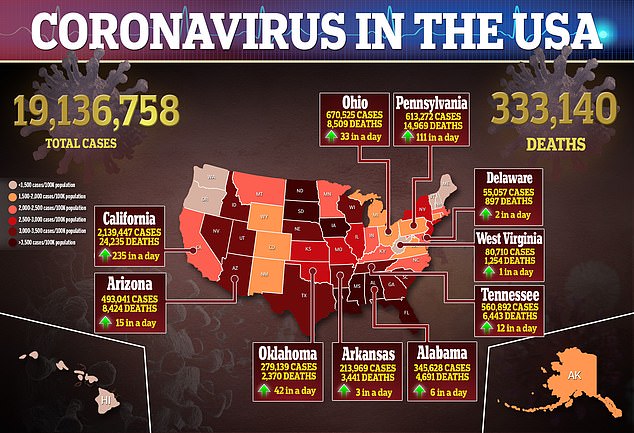 Although they weren’t designed to test whether the shot prevents COVID-19, people who got the vaccine had promising immune responses.

Novavax’s vaccines works a little differently from the mRNA shots designed by Pfizer and Moderna.

MRNA vaccines deliver a fragment of the virus’s genetic code to human cells, in order to them to make a tiny piece of the coronavirus (which is not capable of causing infection).

That tiny piece of coronavirus helps to teach the body how to fight off the virus, without encountering the real pathogen.

Novavax’s vaccine just delivers a lab-made replica of a piece of the virus – which also is incapable of copying itself or infecting human cells – into human bodies, to teach them how fight off coronavirus.

Although it may face the hurdle of other available vaccines, the accelerating spread of coronavirus in the U.S. should help Novavax reach its needed number of cases in trial participants to establish that the vaccine works more quickly than its competitors – whose trials began during the summer lull – required.

It is also preparing to deliver 100 million doses to the United States by January after it was awarded $1.6 billion for developing and testing its potential vaccine.

Novavax is also running a fully enrolled Phase 2b trial in South Africa and a Phase 1/2 continuation in the United States and Australia. Efficacy data from the trials could be available early next year.