A man mobbed by crazed Novak Djokovic fan in a viral image has been identified as a vital member of the tennis star’s team – his personal physiotherapist.

Ulises ‘Magic Hands’ Badio was pulling out the Rialto Towers in Melbourne’s CBD on Monday night when fans of the tennis champion swarmed his car, mistakenly assuming Djokovic was inside.

A Getty image of the physio – who follows Djokovic around the world, even on family holidays – has since become an internet sensation.

Fans had reason to be excited as Djokovic had just won his court case against the Australian government, allowing him to remain in the country. 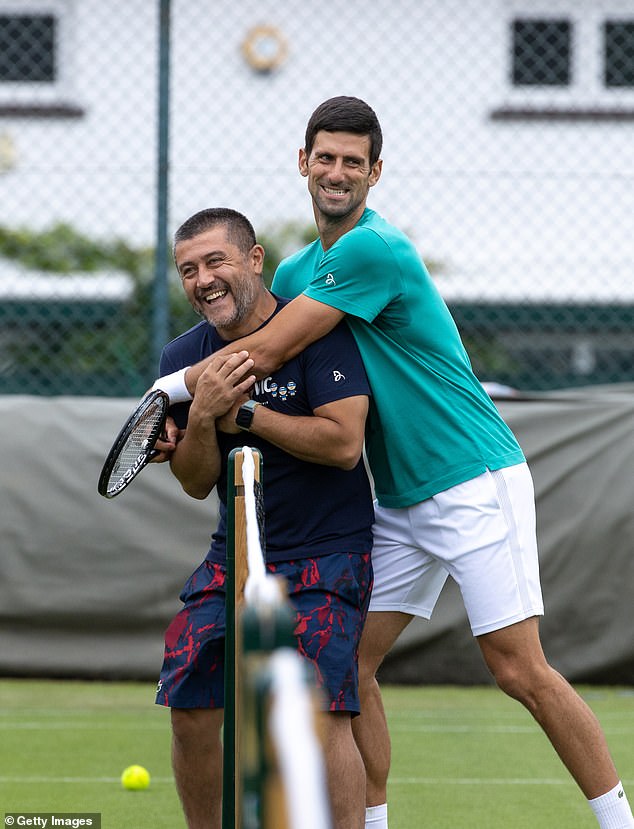 Djokovic says Badio is a key member of his team, with the Argentine even following the Serbian on family holidays to ensure his body remains in top condition

The news photo has sparked a flurry of memes on Twitter – with several social media users turning the image into a joke about Covid.

One amusing meme attributes the different names of the Covid strains to screaming fans.

Others compared the picture to the upcoming opening of Western Australia’s borders, with Badio described as the state and the crazed supporters as Covid cases.

A third turned the photo into a quarantine joke. ‘A foolproof plan, she said. Call your boss in Sydney and tell him you can’t come in this week because you’re quarantining, she said.’ 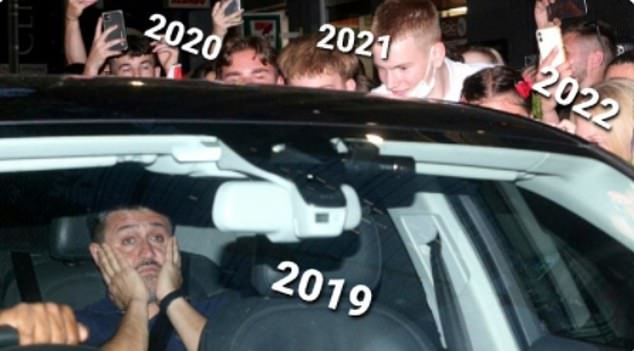 The image, which has gone viral around the world, has become the subject of meme-makers, with many relating it to the global pandemic 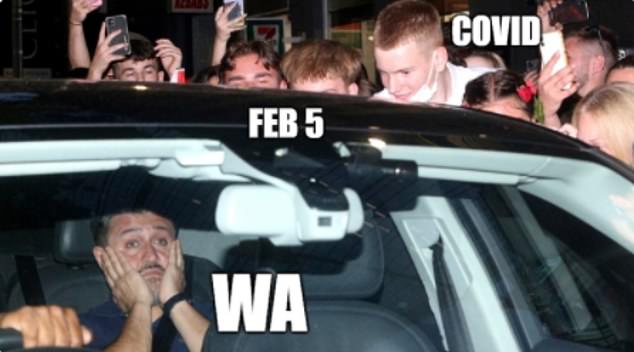 Others compared the picture to the upcoming opening of Western Australia’s borders, with Badio described as the state and the unhinged supporters as Covid cases

In reality, Badio is a key cog in the well oiled machine that is Djokovic. The 20-time grand slam winner regularly pays tribute to him.

‘Uli cares deeply about my career and myself, and he takes care of my physical well-being,’ Djokovic said in the lead-up to last year’s Australian Open.

‘He is a true professional and an extremely dedicated individual.

‘For the last six or seven days, he has been working around the clock and I thank him with all my heart’. 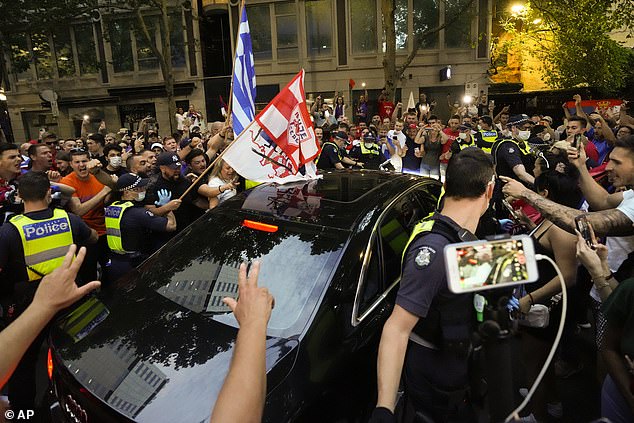 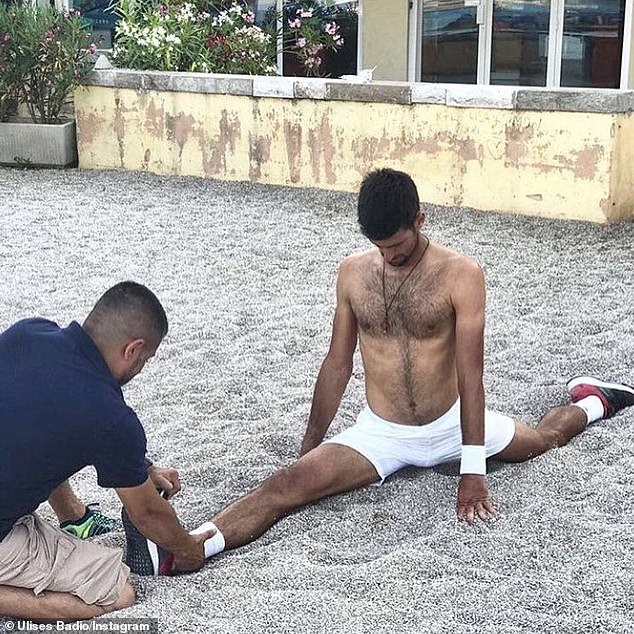 ‘Magic Hands’ has had a distinguished career as a sports physio since graduating from university with a degrees in kinesiology and physiotherapy.

He worked with Spanish football side Valencia CF and at a major sports medicine centre in Arizona, widely regarded as America’s home for sports health and medicine.

He then worked as a physio for the ATP Tour for four years before the Argentine was poached to be Djokovic’s full-time magic man. 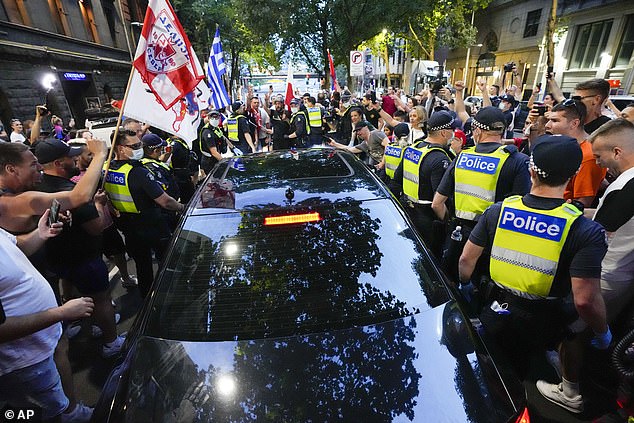 Djokovic says Badio’s work is a huge part of his success at the Australian Open, which is the most physically demanding grand slam on the tour given extreme temperatures in Melbourne during January and February.

The 34-year-old said he’s not only become a hugely important member of his set up but also part of his family.

‘Before everything else, Uli is a wonderful person and you can see it every day by the little things he does,’ the Serbian said in 2021.

‘The way he treats other people, always has a chat with the guards here in Melbourne, the other day he brought some chocolates and gifts to his colleagues that work with the ATP.’ 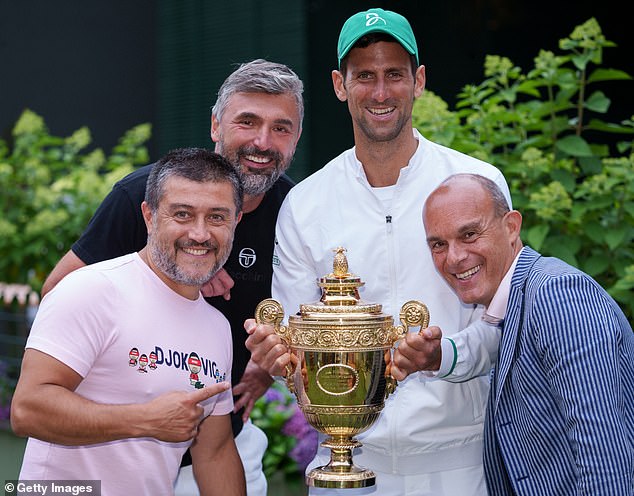 Australia’s Deputy Prime Minister Barnaby Joyce admitted he was wrong about tennis star Novak Djokovic following his court victory – strongly hinting he may not be deported.

The country’s second-in-command conceded he had made the wrong call in advocating for the 20-time Serbian Grand Slam champion to be kicked out of Australia because of his unvaccinated status.

Mr Joyce’s admission suggests Immigration Minister Alex Hawke may be inclined to accept the outcome of the Federal Circuit Court and not move to cancel Djokovic’s visa and have him deported.

The world’s number one ranked tennis player was detained by Australian immigration officials upon arrival at Melbourne Airport last Wednesday night and his life has been in limbo ever since in a case that has made headlines around the world.

Djokovic’s visa for Australia was cancelled due to an apparent issue with his Covid vaccination exemption, and he was held in a cheap hotel under an immigration detention order while he waited for his appeal to be held on Monday.

Then after five days of chaotic bureaucracy and finger pointing between the Australian federal government, the Victorian state government, the Serbian government and Tennis Australia, a court overturned the cancellation of his visa. 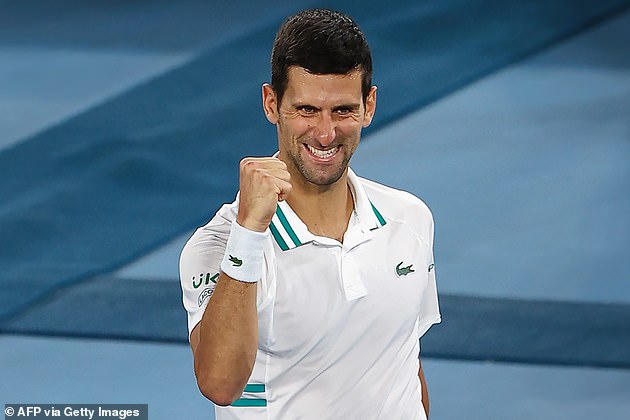 Djokovic was watching the court proceedings from his lawyer’s office when Federal Circuit Court Judge Anthony Kelly ordered the 34-year-old to be freed from detention at Melbourne’s Park Hotel by no later than 5.46pm.

Judge Kelly quashed the decision to tear up Djokovic’s visa and ordered that all his personal belongings be returned, saying: ‘What more could this man have done?’

After days of uncertainty, the tennis legend broke his silence over the Australian government’s failed attempt to cancel his visa, saying he still wants to compete at the Australian Open next week.

‘I’m pleased and grateful that the judge overturned my visa cancellation. Despite all that has happened, I want to stay and try to compete,’ he said on Twitter, alongside a picture of himself practicing late on Monday night. ‘I remain focused on that. I flew here to play at one of the most important events we have in front of the amazing fans.’