Novak Djokovic’s disastrous Adria Tour project went from bad to worse today when the world number one himself announced he had tested positive for Coronavirus.

The 33 year-old Serbian, who has revealed he is an anti-vaxxer, stated that he did not have symptoms but that he had become sixth direct participant in his exhibition series to catch the virus.

It comes after two events, in Belgrade and Zadar, where there was a near total lack of social distancing measures, with players repeatedly getting up close in everything from fun football kickabouts to escapades in nightclubs. 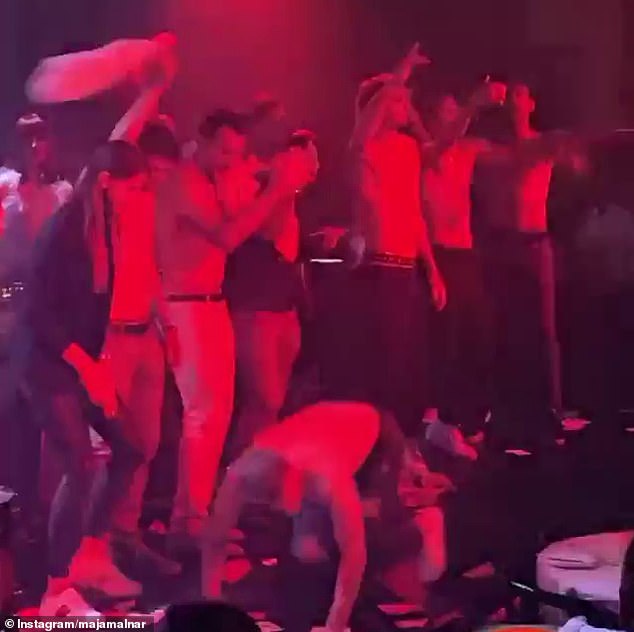 Novak Djokovic and fellow tennis stars partied in a Belgrade nightclub on Sunday night, with some of the players taking their shirts off during the riotous evening 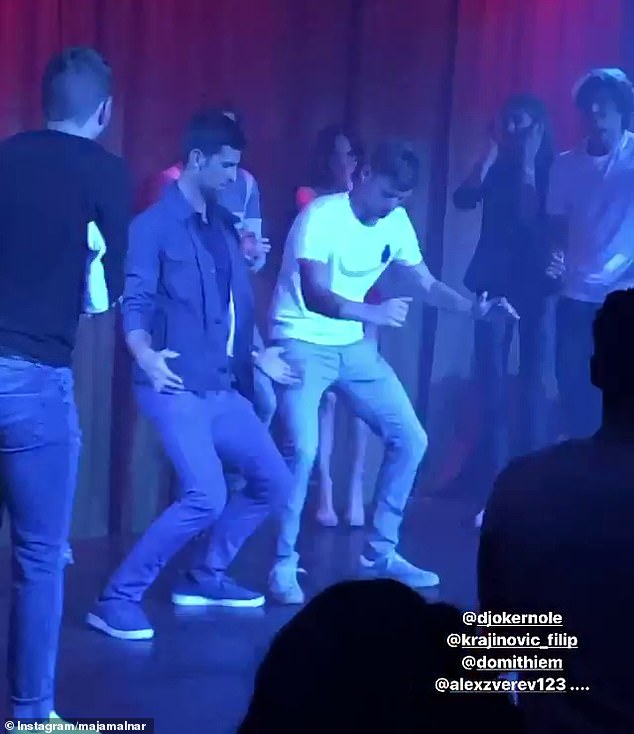 Other players who have tested positive are Grigor Dimitrov, Borna Coric and Viktor Troicki. There have also been positive tests for Djokovic’s fitness trainer Marco Panichi and Dimitrov’s coach Christian Groh.

The highest profile player of them all tested positive after he returned to Belgrade, having declined to be tested with everyone else at the second event in Croatia.

Djokovic’s wife Jelena has also tested positive, although their children have not.

‘The moment we arrived in Belgrade we went to be tested,’ he said, before going on to state his good intentions in arranging the exhibition series.

‘Everything we did in in the past month we did with a pure heart. Our tournament meant to unite and share a message of solidarity and compassion throughout the region.

‘It was all born with a philanthropic idea, to direct all raised funds towards people in need and it warmed my heart to see how everybody strongly responded to this. We organised the tournament at the moment when the virus has weakened, believing that the conditions for hosting the tour had been met.

‘Unfortunately this virus is still present and it is a new reality that we are still learning to cope and live with.’ 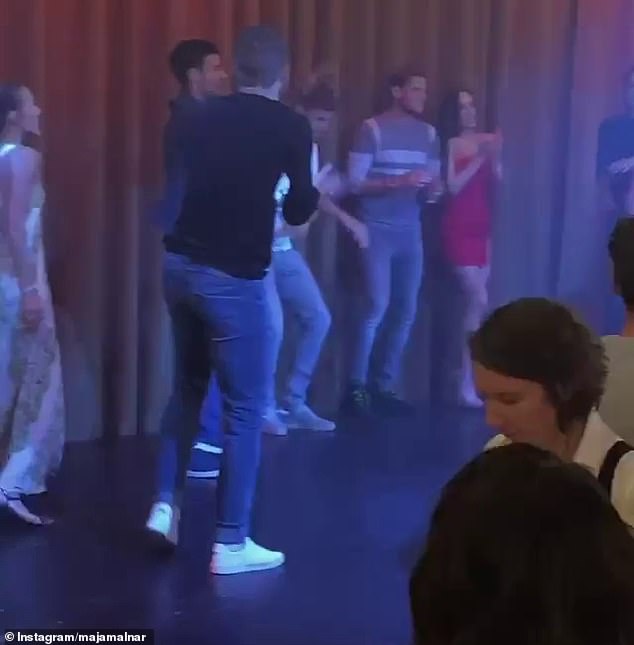 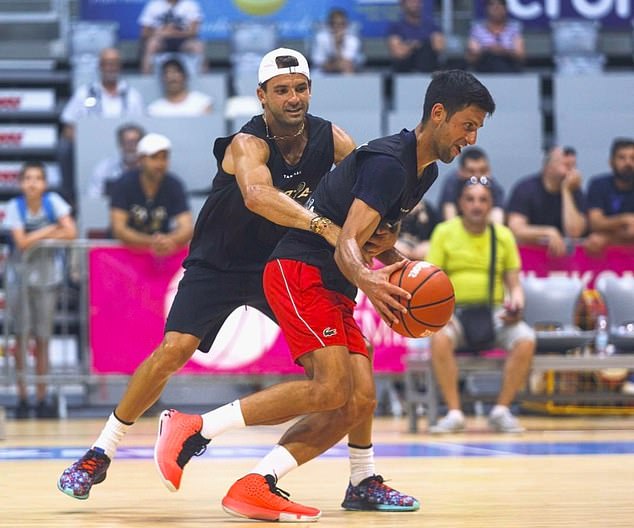 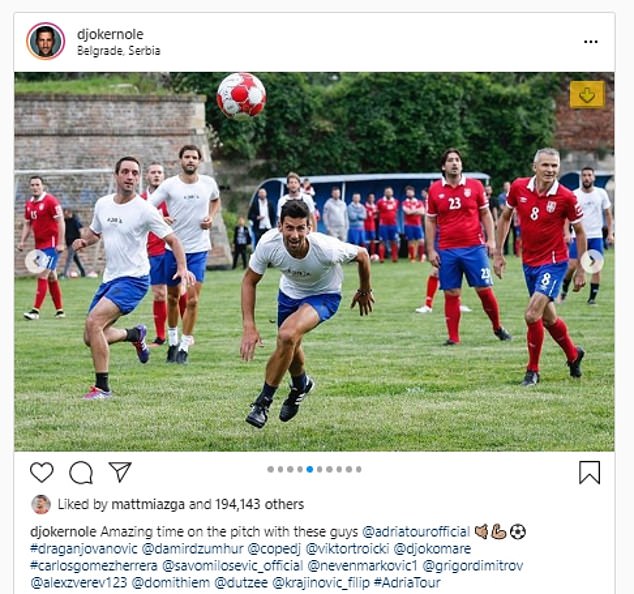 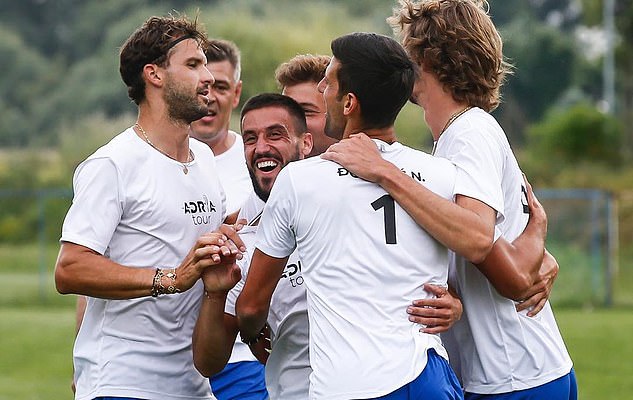 Dimitrov (left), Djokovic and Co showed no consideration for social distancing when they were celebrating scoring goals between their tennis matches on the Adria Tour

There was a hint of contrition at the end of his statement, although he did not address the conduct of the matches – which resembled an ordinary ATP event – nor the extra curricular activities.

Throughout there appears to have been an intention to cock a snoop at the virus, with players clambering all over each other in games of football and basketball, and also with close contact at promotional events.

‘I am extremely sorry for each individual case of infection,’ said Djokovic. I hope that it will not complicate anyone’s health situation and that everyone will be fine.’

With the main attraction now resolving to go into isolation the rest of the Adria Tour is now likely to be cancelled. 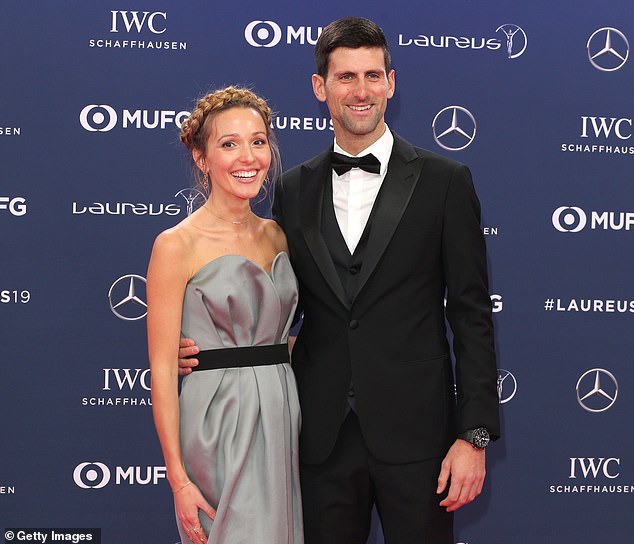 Djokovic pictured alongside his wife Jelena, who has also tested positive for coronavirus 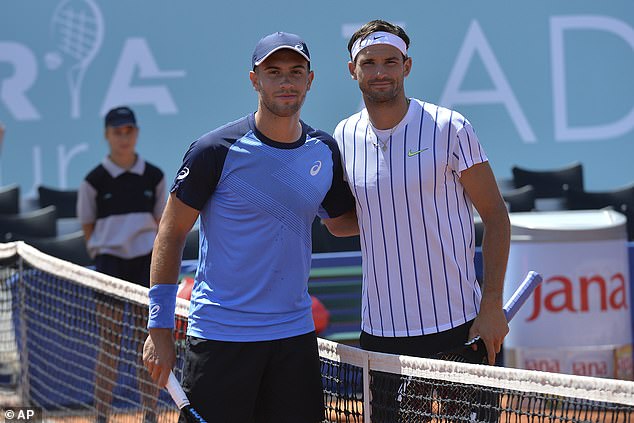 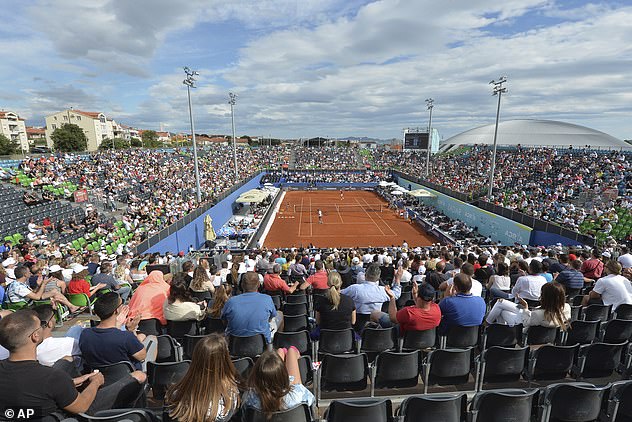 Djokovic has made two major charitable donations to the fight against Coronavirus, to Serbian health authorities and those in the stricken Lombardy region of Italy.

However the rest of his conduct has been deeply controversial to the point of reckless many in the game feel his conduct ought to see him stand down from the position of President of the ATP Player Council.

Almost one year on from his greatest Wimbledon triumph his standing has plummeted, and it will be fascinating to see how it affects his career going forward, as he has always been sensitive about being less popular than Roger Federer or Rafael Nadal.

Djokovic hosted a Facebook Live event back in April and revealed he is against having vaccinations.

‘Personally I am opposed to vaccination and I wouldn’t want to be forced by someone to take a vaccine in order to be able to travel,’ Djokovic said.

‘But if it becomes compulsory, what will happen? I will have to make a decision.

‘I have my own thoughts about the matter and whether those thoughts will change at some point, I don’t know.

‘Hypothetically, if the season was to resume in July, August or September, though unlikely, I understand that a vaccine will become a requirement straight after we are out of strict quarantine and there is no vaccine yet.’

Djokovic has also come in for criticism from players across tennis. 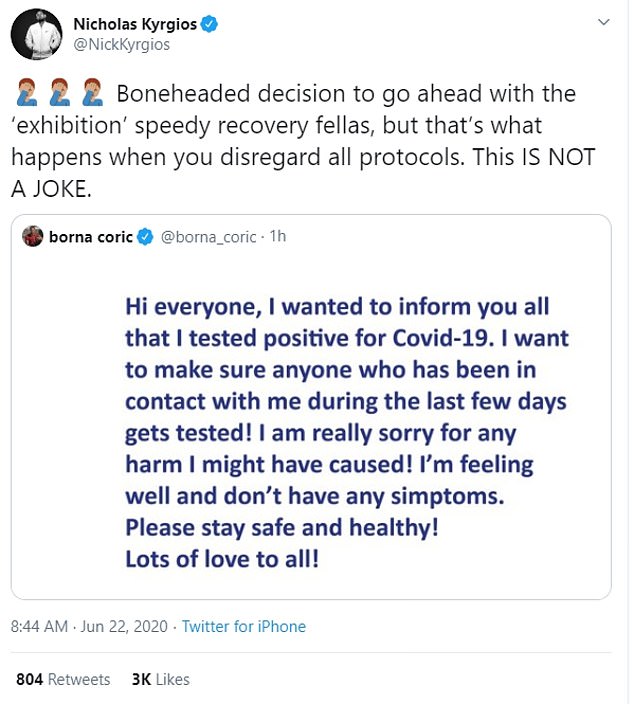 Nick Kyrgios labelled the decision ‘boneheaded’ and British No 1 Dan Evans was particularly stinging with his words.

‘I just think it is a poor example to set,’ Evans said. ‘Even if the guidelines in that country are not two metres… it is not a joke is it?

‘Even if the guidelines were taken away in this country, I would still be trying to keep myself out of the way as much as I could from other people. I just think there has been a total disregard to that.’

Sir Andy Murray was more measured in what he said of Djokovic, his one-time rival.

‘I have always had a good relationship with Novak. In hindsight, what’s happened there it is not a good look,’ he said.

‘When you are going through a time like this, it’s important any of the top athletes around the world are showing that we are taking this extremely seriously and knowing that we are using social distancing measures.

‘Like when I’m getting treatment from my physio, wearing masks and things just to reduce the risk as much as possible.

‘Ultimately, the tour won’t get back again if we are having problems every single week and the players are doing what they want.’