While Novak Djokovic has appeared calm and collected throughout his deportation saga, one Australian has shown he knows exactly how to push the tennis champion’s buttons.

The Serbian star was seen on Channel 9’s broadcast of the Australian Open on Monday night flipping over a table in outrage after being probed about his visa debacle by comedian Andy Lee.

But the clip was not all that it seemed at first glance.

The footage was actually filmed during one of the comedian’s Guess Whom game with Djokovic in 2019 – but was edited to include the athlete’s recent visa crisis.

The 20-time Grand Slam champion was booted out of Australia late on Sunday night, just hours ahead of the Australian Open, after his visa was cancelled over fears the unvaccinated star would stoke ‘anti-vaxx sentiment’ Down Under.

Australian comedian Andy Lee sat down with Novak Djokovic for his 2022 Australian Open segment of ‘Guess Whom’, his twist on the traditional board game

In the original video from 2020, Djokovic’s jokingly stormed off the set after losing at the board game to Lee.

But this heavily-edited footage showed the Serbian star lose his cool about a very different matter – his deportation from Australia.

After a Channel 9 presenter mentioned to Lee the segment seemed ‘familiar’, the comedian admitted viewers may have seen it previously elsewhere.

‘I may have borrowed footage from two years ago,’ he joked.

Each year, the media personality selects a tennis player participating in the Grand Slam to challenge him in a special televised match of the board game, where the traditional characters are swapped out with celebrities.

‘There were two questions from Australians over the past two months; would I be back with Guess Whom, and would I get Novak Djokovic to do it,’ Lee said on Monday.

‘The answer is yes to both.’

Lee joked he managed to secure the exclusive interview with the elite sportsman before flew out of Melbourne airport on Sunday night.

The heavily edited footage shows the pair sitting across from each other, with Djokovic being his own hidden character while Lee has close friend and fellow comedian Hamish Blake.

‘Does [your hidden character] have a legitimate visa to be able to stay in the country?’ 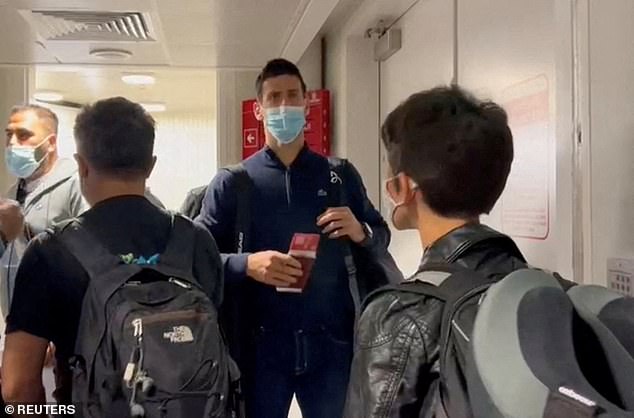 The world no.1 left Australia on Sunday night after three federal court jusges upheld Immigration Minister Alex Hawke’s decision to cancel the tennis star’s visa. Djokovic is pictured with his team after landing in Dubai

Djokovic appears irritated by the question, rubbing his hand over his mouth before answering ‘no’.

Lee proceeds to put down most of the characters on his board – which include Homer Simpson, the Queen, the pope, and Kylie Jenner – leaving him with only Djokovic left.

After asking whether Djokovic’s character is Novak, the tennis star throws his head back and says ‘yeah’.

‘Ooh. That’s another loss for you this week,’ Lee says, adding ‘you have stayed pretty calm about it though’.

Djokovic pauses for a moment before abruptly standing and tipping the table over.

‘What do you mean calm?! Are you kidding me, or what?’ the tennis star yells, before storming off.

The tennis star lost his last-ditch bid to stay in Melbourne and compete in the Australian Open on Sunday after three federal court judges unanimously ruled he did not have grounds to dispute Immigration Minister Alex Hawke’s visa cancellation.

His visa was first cancelled by Australian Border Force officials when he touched down in Melbourne on January 5 on the basis that he didn’t have an exemption from the requirement to be vaccinated.

That decision was revoked through a federal court appeal and the visa reinstated on Monday, before Mr Hawke used ministerial discretionary powers to again have it torn up.

Government lawyers successfully argued Djokovic was an anti-vax ‘icon’ and his views could excite anti-vaccination sentiment in Australia.

Djokovic flew out of Melbourne to Dubai late on Sunday as his team make their way back to Serbia.

The 34-year-old has been ordered to pay the federal government’s legal costs and has been banned from obtaining an Australian visa for three years.