Northampton are reportedly set to submit an official complaint to the EFL after Scunthorpe played seven teenage stars in their 7-0 thrashing by Bristol Rovers that sealed their automatic promotion to League One.

The Cobblers agonisingly failed to go straight up a division despite their 3-1 win over Barrow as Rovers beat them to third place by virtue of goals scored, with the two clubs level on points and goal difference. Joey Barton’s side netted 71 goals for the season, while Northampton scored 60.

And according to the Guardian, Northampton are now set to take action because they believe Scunthorpe ‘compromised the integrity of the league’ by fielding a number of young, inexperienced stars during their drubbing. 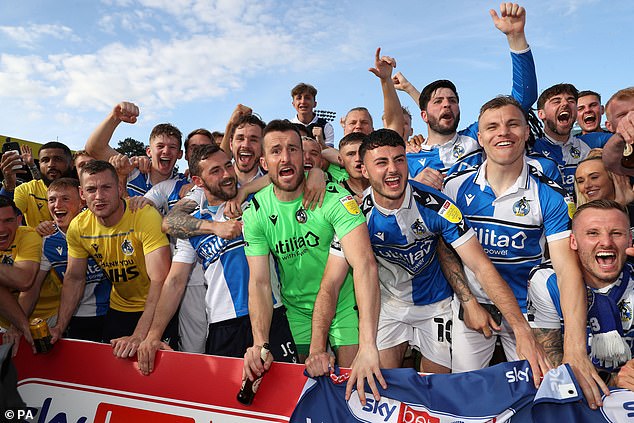 The Iron – who were already relegated to the Conference last month – included four Under-18 players, including a 17-year-old goalkeeper Owen Foster, who was a first-year scholar at the club.

Their starting XI had an average age of 20 and Rovers’ opener was thanks to an own goal by second-year scholar Oliver Lobley.

EFL regulations state that after the final Thursday of March, all teamsheets must include at least 10 outfield players who were on the team sheet in the previous game.

Scunthorpe made just three changes from their last game against Hartlepool, so they would not be in breach of the rules.

If the EFL does receive a formal complaint, it is understood that it would ask both clubs for their observations and then determine whether or not there has been a regulation breach. 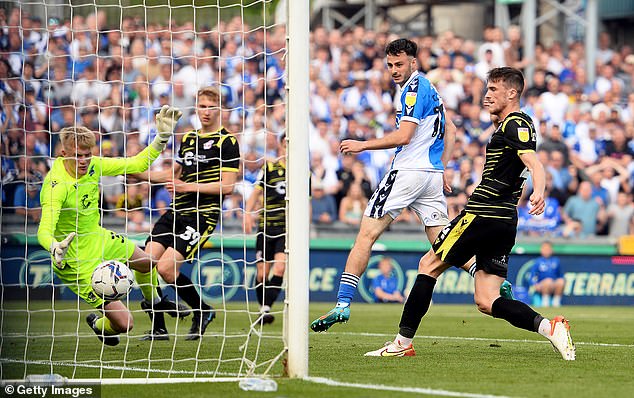 Northampton chairman Kelvin Thomas said the club had spoken to the EFL about ‘some matters’ but insisted he had congratulated Bristol Rovers on their promotion as they prepare for a play-off semi-final against Mansfield Town.

‘As a club we have been overwhelmed by the support shown across all of football following a very tough day Saturday,’ he said.

‘We have obviously spoken to the EFL regarding some matters but probably more so about the rules going forward and we certainly do not expect anything to change in the short term. I have already congratulated the Bristol Rovers Chairman on their promotion.

‘We are now totally focused on the play-offs against Mansfield. We can’t lose sight of the fact that this group of players achieved 80 points over the season which we finished very strongly winning 4 of our last 5 games.

‘Talking to Jon [Brady] and the players today what happened this weekend has only brought the group closer together and we will now use that motivation for the play offs, in which we know the Cobblers fans will be right behind us.’ 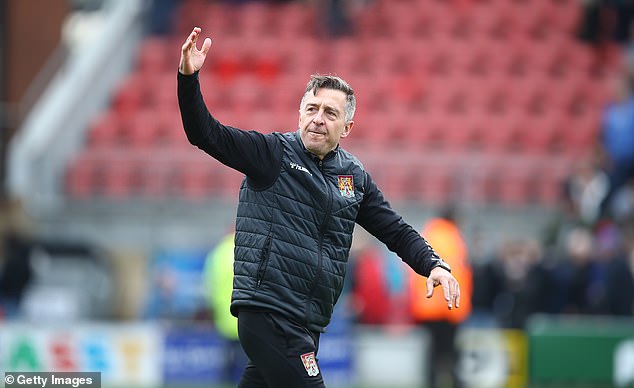 Sportsmail has approached Scunthorpe and the EFL for comment.

Speaking after his side’s humbling at Bristol, Scunthorpe boss Keith Hill criticised the professionalism of his players throughout the season.

He suggested he expected ‘players with integrity’ when he took over and also slammed the squad for turning up late and taking ‘shortcuts’.

‘We’ve got to make sure that the club builds a squad of players that represents the supporters’ values. 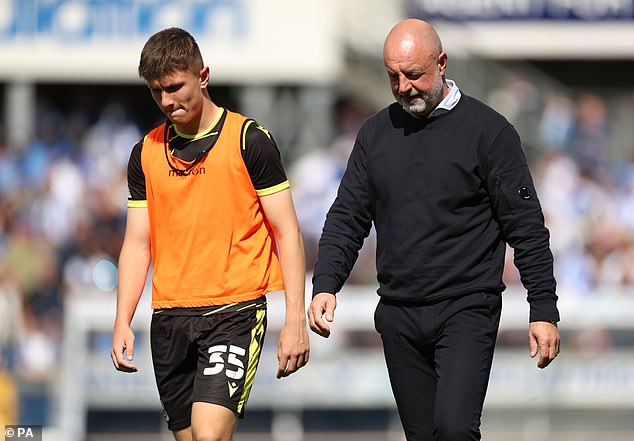 ‘We need the young players to set the standard. And the standard – not just on the matchday pitch, but the training pitch – has been very, very poor.

‘The first P of professionalism is punctuality. Proper practice. Pride. You don’t take shortcuts. If you take shortcuts you fail.

‘I’m expecting the better players – players with integrity – to support me. It’s the most difficult experience I’ve ever had as a manager or as a player.

‘The dynamics of the club have been terrible. When we got to January, that was an open door for players who thought they had a chance of leaving. I had players asking me on a regular basis up to January, ‘can I leave? Can I leave?’ And there were players we wanted to leave who refused to leave.’