A birthday party nearly descended into chaos after a chainsaw-wielding man arrived hurling threats and racist abuse at revellers.

Footage of an 18th birthday celebration in far North Queensland on Saturday has become the focus of a police investigation after the man arrived and allegedly threatened partygoers by revving the dangerous machine in their direction.

The group however turned the tables on the alleged 26-year-old aggressor, kicking and punching him as he attempted to flee in his four-wheel-drive.

The confrontation happened at 11.20pm on Saturday in the Cairns suburb of Bayview Heights.

The man had allegedly disturbed the party earlier in the evening, before returning late at night armed with a chainsaw.

The 26-year-old stepped out of his Toyota four-wheel-drive holding the machine towards the partygoers, revving it threateningly.

People in attendance said the man was hurling threats and racial abuse as he flexed the tool.

‘He was saying go back where you came from,’ one witness told 7News.

Another man spoke of his fear when the man pointed the chainsaw at him.

‘I was shocked, I didn’t expect that to happen,’ she said. 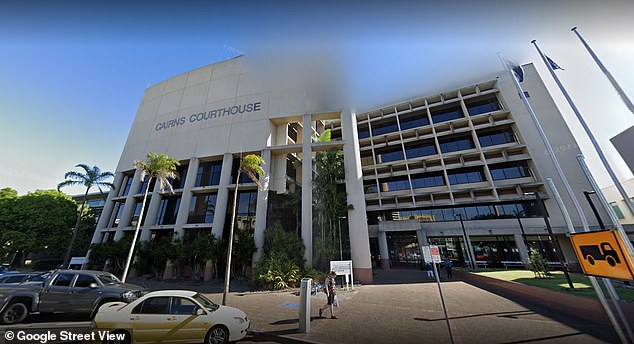 The 26-year-old man has been charged with one count of going armed to cause fear, as well as dangerous drugs and drug utensil possession charges

The group allegedly being threatened then retaliated, punching and kicking the man as he dropped the chainsaw.

The man then retreated to his car, with footage of the incident showing the partygoers continuing to hit him through his window.

Police were able to track the man down using the registration plates from the video.

‘We’re very lucky no one was hurt, even if it were just threats made,’ a police spokesperson said.

‘A chainsaw can get out of hand very quickly.’

The 26-year-old has been charged with one count of going armed to cause fear, as well as dangerous drugs and drug utensil possession charges.

He is due at a Cairns court in January.