A North Korean defector who was shot by Chinese guards while trying to cross the border this week is infected with coronavirus, a source has said.

The man was taken to hospital after being shot while trying to cross the Tumen River that separates North Korea from China on April 20.

When he arrived at hospital he was tested for the virus and found to be positive, and is now under quarantine, a Chinese source told Daily NK.

His case provides the strongest evidence to date that North Korea is suffering from a coronavirus outbreak, despite Pyongyang publicly denying having any cases.

A North Korean defector who crossed into China this week has tested positive for coronavirus, in the clearest evidence yet that the country is suffering an outbreak (file)

Daily NK, which has a network of informants within North Korea, has previously reported on several suspected outbreaks within the country.

The site reported last month that 180 soldiers had died from ‘coronavirus-like symptoms’ between January and February this year.

It also reported that another 23 people may have also died of the infection – but with little or no state healthcare system within North Korea, confirming cases via testing has been virtually impossible.

Last week, Radio Free Asia reported that lecturers have been privately telling North Korean citizens that there are cases in the country

But the lecturers insisted that North Korea has the fewest cases of coronavirus of any country in the world due to its ‘superior socialist healthcare system’. 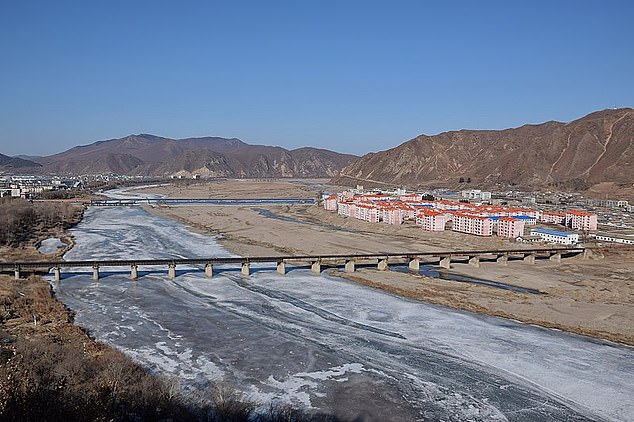 The man was taken to hospital after being shot by a Chinese border guard while attempting to cross the Tumen River (file image), which separates the two countries

Officially, Pyongyang has admitted to no cases and no deaths, insisting on April 1 that the country remains virus-free.

Evidence that North Korea may be suffering an outbreak comes amid speculation about Kim Jong-un’s health after he disappeared from public view.

The Supreme Leader was absent from a Day of the Sun celebration marking his grandfather’s birthday – a major public event since Kim Il-Sung is still technically the leader of North Korea, despite being dead.

His last confirmed appearance came on April 11, at a meeting of the Worker’s Party.

American intelligence services are said to be monitoring reports that he is in grave condition following heart surgery, according to CNN.

But South Korea has said it has detected no unusual activity from the North, and that Kim seems to be at the helm of the government despite not appearing in public.