Tech-savvy North Koreans are reportedly ‘jailbreaking’ the country’s government-controlled smartphones in a bid to access forbidden media from other countries.

Jailbreaking is the process of exploiting the flaws of a locked-down electronic device to install software other than what the manufacturer has made available.

For most of the world, this means installing apps and software that break the restrictions of Apple’s or Google’s operating systems.

However, in North Korea, citizens are forced to use home-grown handsets that simulate the smartphone experience while restricting users to regime-approved apps and propaganda.

Each phone comes with an app that monitors how it is used, taking screenshots at random and storing them in a directory where they cannot be deleted.

Now a new report reveals how some citizens have worked out how to jailbreak the devices in order to evade the controls, so they can access information from the outside world.

An example of the type of government-controlled smartphone used by citizens of North Korea is the Pyongyang 2425, released in 2019.

The device looks very similar to an iPhone – including the distinctive camera ‘notch’ at the top of the display.

However, only runs government-approved apps and is incapable of connecting to foreign WiFi.

Although the isolated nation has a famously self-reliant philosophy, the gadget’s serial number indicates that it was made in China.

In the report, two defectors who escaped the country independently described a similar method for hacking the phones.

It involved using an app smuggled in from China, which would be transferred to the phone after connecting it to a computer via USB.

‘If the phone was tricked in the correct way, the application could be transferred and launched without being detected and deleted by the phone’s security software,’ the report states.

‘Once launched, the application provided the user with root access, which gives complete control over the entire phone and the ability to add, modify or delete any file.’

The report was created by Lumen, a non-profit organisation working to get uncensored information to North Koreans, and ERNW, an IT security firm.

The authors wrote: ‘The scale of the hacking still appears to be minor, but recent changes to North Korean law indicate national authorities view it as a serious problem.’

One new law, enacted in 2020, promised ‘at least three months of labour education’ for the crime of ‘illegally installing a mobile phone manipulation program’.

Meanwhile, people discovered with ‘an impure publication’ or ‘a propaganda material blocking program’ on their phone face fines of between 50,000 and 100,000 North Korean won. 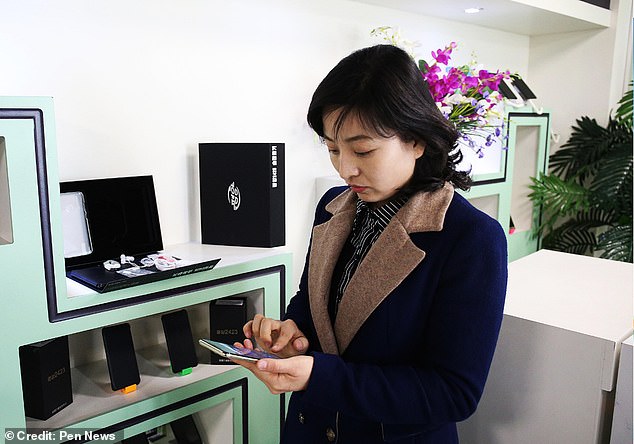 People discovered with ‘an impure publication’ or ‘a propaganda material blocking program’ on their phone face fines of between 50,000 and 100,000 North Korean won – 10 times the official monthly salary

WHAT IS ‘MIRAE’ WIFI?

The service is apparently based on WiFi but unusually requires a SIM card for access.

It’s called ‘Mirae,’ which means ‘future,’ and is up and running in central Pyongyang, according to the reports.

It’s the first time an outdoor WiFi service has been mentioned in North Korean media and runs alongside two cellular networks operating in the country that provide wireless data service.

One of the defectors, a university student who used the pseudonym Mr Park, estimated that 30 per cent of his classmates had jailbroken their phones.

But the other defector, who adopted the alias Mr Kim, estimated that less than 10 per cent of the wider population had.

He said some people had started offering a phone-unlocking service to non-technical users.

He added that disabling the regime’s controls not only allows users to access unapproved apps and media, it also boosts the resale value of the phone.

Deleting the mandatory screenshots on the phone, which are captured with an app called Trace Viewer, makes it more valuable still.

‘The number of screenshots in the phone helps determine how old a phone is,’ said Mr Kim.

‘So, if it has a lot of screenshots that means the price will go down.

‘If the phone looks new from the outside and the seller wants to delete the files inside. they can get a better price for the phone.’

The skills necessary to hack phones appear to have entered North Korea from China, where the regime sends some of its citizens to earn money working on software outsourced by western firms.

North Korean smartphones control what users can access by way of a digital signature system, automatically deleting any media that lacks the right signature.

The accepted signatures come in two types – one created by the phone itself for files it makes like photographs, and the other created by the government for approved media.