North Atlantic whales born today are up to a metre (3ft 3 inches) shorter than those born 30 years ago, and fishing could be to blame, a new study revealed.

They are one of the world’s most endangered whale species and, despite being largely protected from hunting, populations are well below what they once were.

Using aerial photogrammetry measurements collected from aircraft and remotely operated drones over a 20-year period, the team from the National Oceanic and Atmospheric Administration (NOAA) in California studied their body length.

North Atlantic right whales have reduced in size by about a metre since the 1980s, when aerial tracking began, say scientists involved in the project.

The team believe that becoming entangled in fishing gear, changes in prey distribution and other human activities have led to the shorter whales, through a combination of stress on the mother and food shortages. 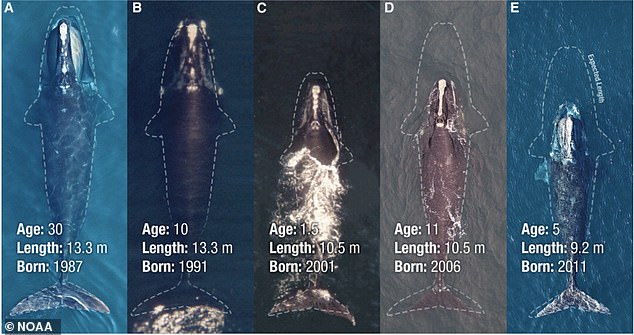 North Atlantic right whales have reduced in size by about a metre since the 1980s, when aerial tracking began, say scientists involved in the project

WHAT ARE NORTH ATLANTIC RIGHT WHALES?

North Atlantic right whales are a species of marine mammal which can measure up to 60 feet long (20 metres).

They tend to calve off the shores of Georgia and Florida in the Atlantic Ocean before migrating further north.

Numbers have plummeted in recent years due to premature deaths as a result of getting trapped in fishing lines and unfortunate encounters with ships.

A primnciple food source for the whales is phytoplankton.

This phytoplankton has been damaged in recent times as global warming has increased the water temperature of the Gulf of Maine.

It is currently critically endangered and there are believed to be only 365 animals in the world.,

Of these, only 70 are reproductive age females, and at the current rate they are being killed (10 last year) the species could be functionally extinct in 20 years.

The animals has a gestation period of over a year and the calves rely on their mother for food for a further 9-12 months.

The new study, published in the journal Current Biology, suggests that, in addition to smaller population sizes, those whales that survive are struggling.

They found a significant reduction in the length of whales born today, when compared to those born in the 1980s and 1990s, up to 40 years ago.

Study author, Dr Joshua Stewart, from the National Oceanic and Atmospheric Administration (NOAA) in La Jolla, California, said: this decline, of about seven per cent, is just an average and in some extreme cases young whales are several metres shorter than expected.

‘Major impacts on life history like this have been documented in heavily exploited commercial species, especially fishes, but to our knowledge this is the first time these kinds of impacts are being recorded in a large mammal.’

Dr Stewart and his colleagues wanted to document the challenges faced by right whales as indicated by changes in their life history characteristics, including size.

They took to the skies, studying images captured by drones and aircraft over the past 20 years and searched for any changes in the body length.

These whales can reach over 14 metres (45ft) long, but those born more recently have been closer to 10 metres (32ft).

Dr John Durban, of Oregon State University, also involved in the research, said they were able to build on work using conventional aircraft in the early 2000s to study the whales.

In recent years they adopted drone technology, allowing them to extend observation times and locations.

‘In both cases, we were able to measure whales by flying a camera high above them, essentially giving them a health check without them knowing we were there.’

The researchers said that the whales were an ‘ideal’ case study because they’ve been monitored consistently since the 1980s, with individual-level information on age and size and detailed records of attached-gear entanglements. 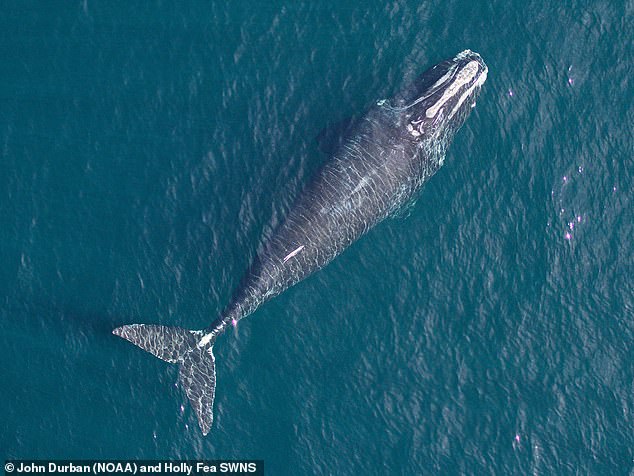 North Atlantic right whales have reduced in size by about a metre since the 1980s, when aerial tracking began, say scientists involved in the project

Intensive monitoring over decades allowed the NAOO team to evaluate the effects that severe and prolonged entanglements with fishing vessels and nets has caused.

They wanted to find out these interactions may have on the long-term fitness of individuals, as well as the potential effects of other stress factors such as vessel noise, ship strikes, and shifting prey availability.

Dr Stewart said: ‘Fishing gear entanglements in this population are unfortunately fairly common, and entanglements resulting in attached gear and severe injuries have been generally increasing over the past several decades.

‘Previous studies have shown that the increased drag from entangling gear requires right whales to spend a lot of extra energy just to go about their normal activities, and that is energy they might otherwise spend on growth or reproduction.’ 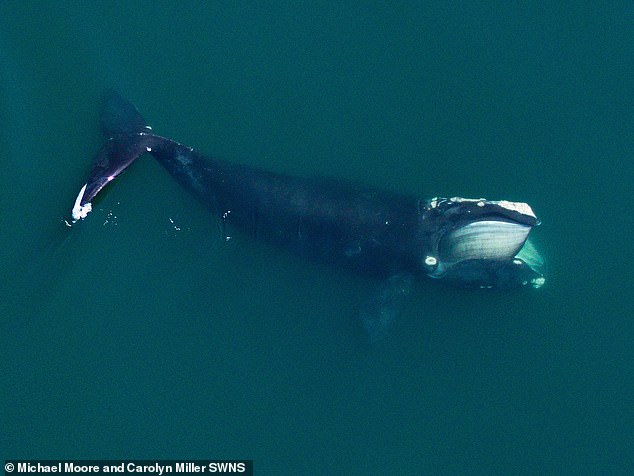 They found that these fishing gear entanglements are one of the stressors on the whales that is linked to them developing shorter bodies.

Dr Stewart suggested that the stunted growth may lead to reduced reproductive success and a greater likelihood of life-threatening gear entanglements.

And he believes the findings in right whales may have implications for other species of large whales around the world.

‘The smaller you are, the less energetic reserves you have, and the harder it might be to survive a serious entanglement or sustained food shortage,’ he added. 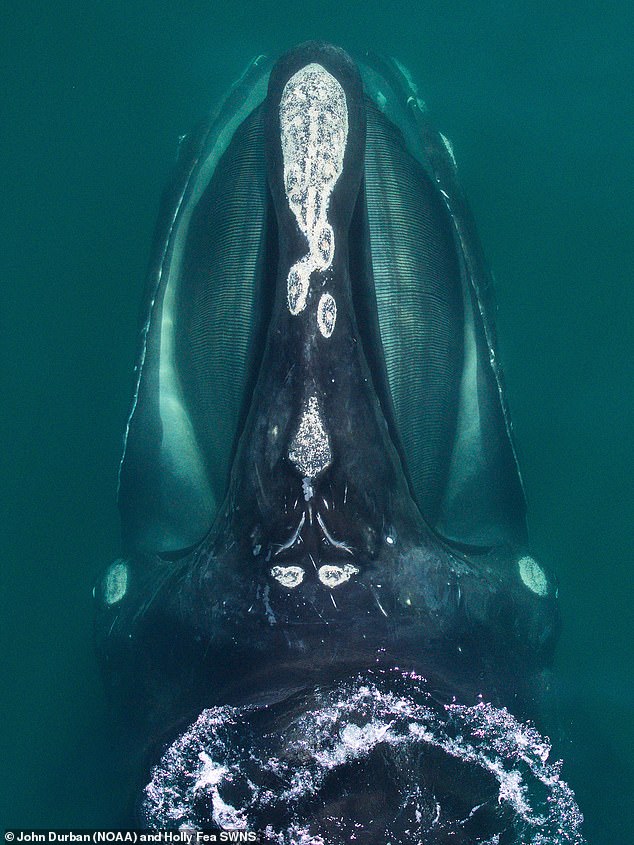 ‘So it’s possible that these life history changes could translate into population viability impacts. But this really makes me wonder about how large whales worldwide are being impacted by entanglements,’ said Dr Stewart.

‘This is by no means a problem unique to right whales – entanglements are a major threat for whales, marine mammals, and other marine species worldwide.

‘Because North Atlantic right whales have this incredibly detailed dataset with known ages, sizes, entanglement histories, and so forth, we could directly examine how these impacts are affecting growth rates.

‘My guess is that many other species are being similarly affected, but we just don’t have the ability to detect it in less well-studied populations.’ 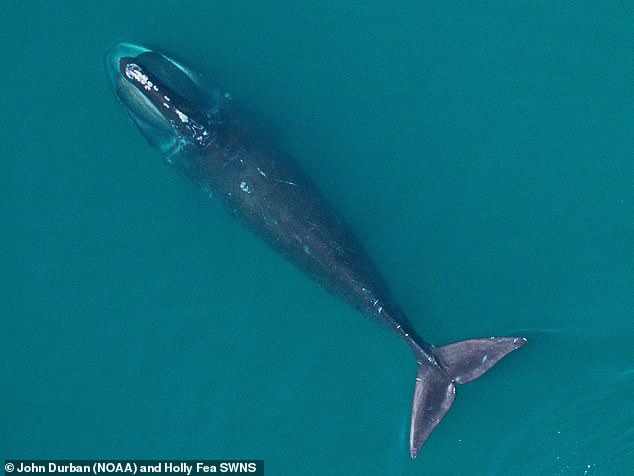 Based on their findings, the researchers called for stronger action to reduce the impacts of fishing gear and vessel operations

Based on their findings, the researchers called for stronger action to reduce the impacts of fishing gear and vessel operations.

Study co-author Amy Knowlton, of the New England Aquarium, said implementing proven solutions such as slowing vessels down, lower breaking strength and ropeless fishing gear while in the range of these whales is vital.

She said taking these actions ‘is critical and urgent steps needed to stave off the extinction of this species.’

Now the researchers plan to explore whether shorter female whales do indeed have fewer offspring.

The findings have been published in the journal Current Biology.

A recent study in Canada found that over the last century, the beetles in the region have shrunk.

By looking at eight species of beetle and measuring the animals from past and present they found that some beetles were adapting to a reduced body size.

The data also showed that the larger beetles were shrinking, but the smaller ones were not.

Around 50 million years ago the Earth warmed by three degrees Celsius (5.4°F) and as a result, animal species at the time shrunk by 14 per cent.

Another warming event around 55 million years ago – called the Paleocene-Eocene Thermal Maximum (PETM) – warmed the earth by up to eight degrees Celsius (14.4°F).

In this instance, animal species of the time shrunk by up to a third.

Woolly mammoths were a victim of warming climate, shrinking habitat and increased hunting from a growing early-human population which drove them to extinction – along with many large animals

With the global temperatures set to continue to rise, it is expected the average size of most animals will decrease.

As well as global warming, the world has seen a dramatic decrease in the amount of large animals.

So called ‘megafauna’ are large animals that go extinct. With long life-spans and relatively small population numbers, they are less able to adapt to rapid change as smaller animals that reproduce more often.

Often hunted for trophies or for food, large animals like the mastadon, mammoths and the western black rhino, which was declared extinct in 2011, have been hunted to extinction.