Traces of explosives have been found at the sites of the Nord Stream pipeline blasts, confirming that sabotage had taken place, a Swedish prosecutor said on Friday.

Swedish and Danish authorities are investigating four holes in the Nord Stream 1 and 2 pipelines which link Russia and Germany via the Baltic Sea and have become a flashpoint in the Ukraine crisis.

Denmark last month said a preliminary investigation had shown that the leaks were caused by powerful explosions.

‘Analysis that has now been carried out shows traces of explosives on several of the objects that were recovered,’ prosecutor Mats Ljungqvist who is leading the preliminary investigation said in a statement.

‘The investigation is highly complex and comprehensive. The ongoing probe will determine whether any suspects can be identified,’ he added.

Investigators found traces of explosives at the site of the damaged Nord Stream pipelines, confirming that sabotage had taken place, a Swedish prosecutor said on Friday. Pictured: An aerial image above one of the Nord Stream sites being investigated by Sweden

Seismologists in Denmark and Sweden have previously said they had registered tremors in the immediate vicinity of the leaks and that the signals did not resemble those from earthquakes.

The September 26 ruptures of the seabed pipelines, spewing gas into the ocean that bubbled to the surface in the week that followed, triggered warnings of public hazard and fears of environmental damage.

Although the pipelines were not in operation at the time of the damage, they contained gas before falling victim to the apparent sabotage.

A section measuring at least 164 feet is missing from Nord Stream 1, Swedish daily Expressen reported on October 18 after filming what it said were the first publicly released images of the damage.

Russia’s defence ministry last month said that British navy personnel blew up the pipelines, a claim that London said was false and designed to distract from Russian military failures in Ukraine.

‘There is evidence that Britain is involved in sabotage…a terrorist act against vital energy infrastructure,’ he told reporters. ‘Such actions cannot be put aside. Of course, we will think about further steps. It definitely cannot be left like this.’

His comments came after Kim Dotcom, who ran site Megaupload before he was convicted of fraud, began circulating a conspiracy theory that former British Prime Minister Liz Truss had texted US Secretary of State Antony Blinken immediately after the attack saying ‘it’s done’.

Kim claimed to have learned of the message from Truss’s iCloud, after it was revealed that Russia hacked her phone while she was foreign secretary.

Neither Kim nor Peskov have released the evidence they claim to have seen.

But the accusation represented a new line of attack from Russia at the US and Britain, which have led support for Ukraine in resisting Putin’s invasion.

London has rejected the claims. 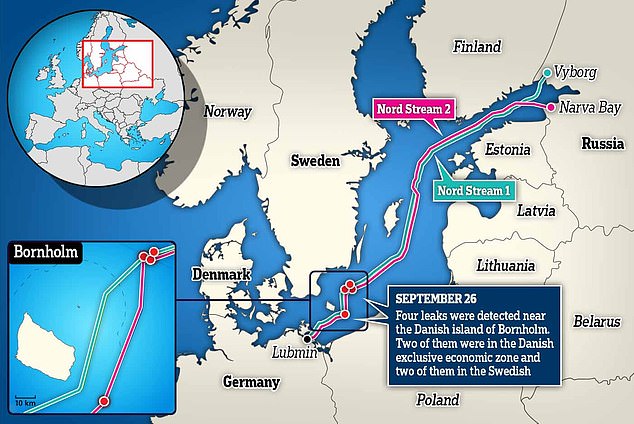 All of the four leaks are in the Baltic Sea off the Danish island of Bornholm. Two of the leaks were located in the Swedish exclusive economic zone, and the two others in the Danish one. Both countries are investigating two leaks each 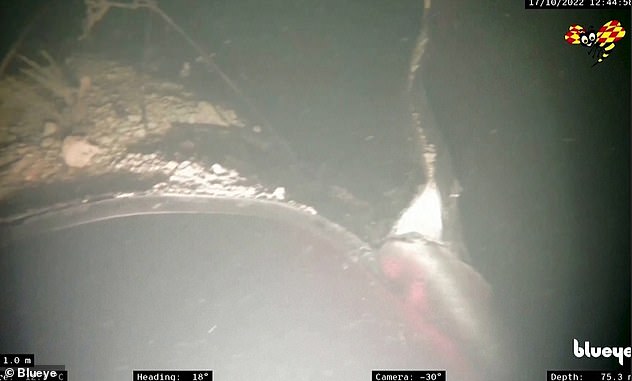 Extraordinary images (pictured) of a mangled Nord Stream pipeline emerged last month, three weeks after it was blown up ‘with extreme force’ in a suspected sabotage

In October, images of a mangled Nord Stream pipeline were release – three weeks after it was blown up. Footage showed 165 feet of the Nord Stream 1 pipeline was destroyed or buried under the seabed, following an explosion on September 26.

In the videos published by Swedish newspaper Expressen, a massive tear and twisted metal could be seen on the pipeline, 80 metres down under the ocean.

Through the gloom, a deep tench could be seen in the seabed where the gas pipeline used to be, before the explosions.

The videos showed how over 165 feet of the pipeline is either missing or buried under the seabed, and long tears can be seen on the seabed.

‘It is only an extreme force that can bend metal that thick in the way we are seeing,’ Trond Larsen, drone operator with the Norwegian company Blueye Robotics, told Expressen at the time.

Larsen, who piloted the submersible drone which captured the video, also said you could also see ‘a very large impact on the seabed around the pipe.’

Expressen said the explosions measured 2.3 on the Richter scale.