Eurostar passengers travelling to France via Eurostar from London are being turned away for not having a ‘good enough reason’ after President Macron’s last minute rule change.

From today, Britons travelling to France must give a ‘compelling reason’ for their trip as the country continues to wrestle with the Indian variant.

The new rules, announced last night, mean people can only travel to France for reasons such as bereavement or childcare, unless they are a French National or EU citizen.

All travellers are also required to do a pre-departure Covid test 48 hours before their journey, rather than 72, and must quarantine for seven days upon arrival. 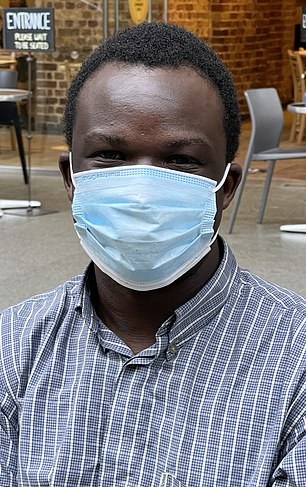 Sacha, 26, who is taking her sister to Belgium for medical reasons, missed her train today. David Odhiambo, 26 (right), a economist from Mile End in east London, can’t go travel to see his boyfriend 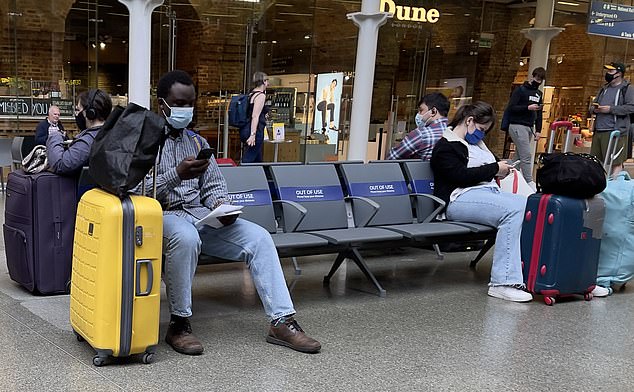 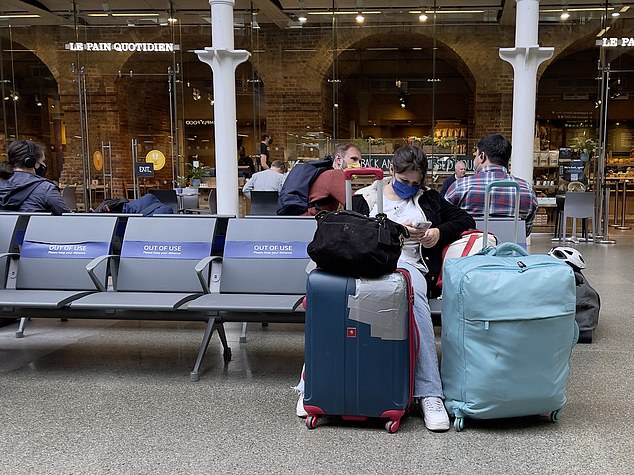 The new rules, announced last night, mean people can only travel to France for reasons such as bereavement or childcare,

Ange, 18, from Streatham, south London, said: ‘I was going to France to visit my grandmother and when I checked online, all it asked for was a PCR and a self-isolation declaration.

‘But when I got to the border here, they said you can’t travel because your reason’s not valid anymore.

‘They said there’s been a change in the law last night and the UK is no longer in the EU so I can’t go, because my reason isn’t valid.

‘But I’m 18, I haven’t been checking the news because I’ve been revising for your A-levels.

‘I was busy revising and because I was stressed because exams I didn’t see the law had changed.

‘Even if I had, it wouldn’t have changed anything. Maybe I didn’t beg enough or hard enough.

‘It’s really frustrating because I asked them if they could let me off because they literally changed last night.

‘I said please, I didn’t know but they said ‘no.’ I’m not going to cry, but I wanted to see my grandma – I haven’t seen her and my cousins in over a year.

‘Now I literally have to text them saying I can’t come today. It’s going to be a shock to them because they were looking forward to seeing me.

‘My cousin had cancelled her work to come pick me up at the station, and now I’m not going to be there.

‘I’m not going to book another ticket for a few months at least.’

David Odhiambo, 26, a economist from Mile End in east London, said: ‘Essentially, I did my exchange in Paris six years ago and met my boyfriend there. 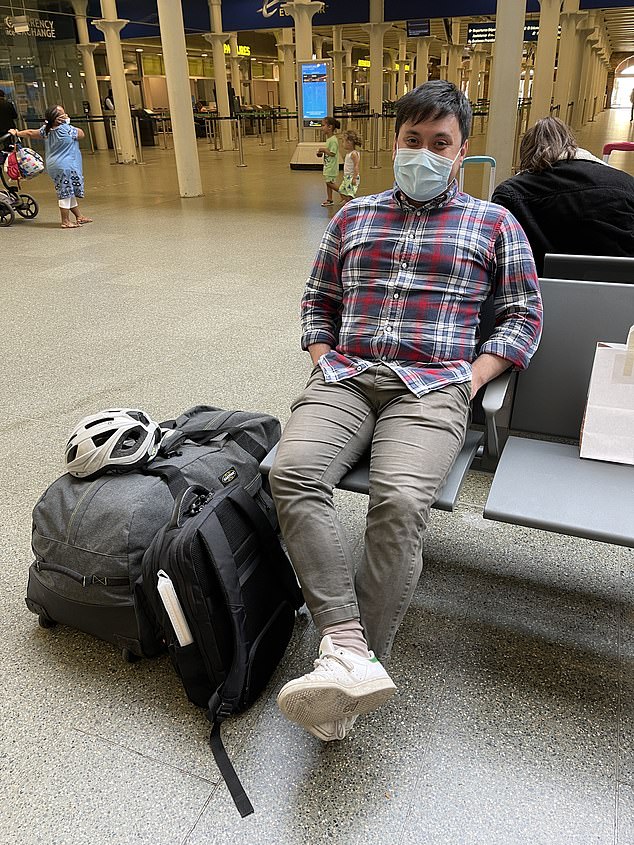 George Roederer, 27, a railway engineer who was travelling to Paris, realised upon arrival his test was invalid 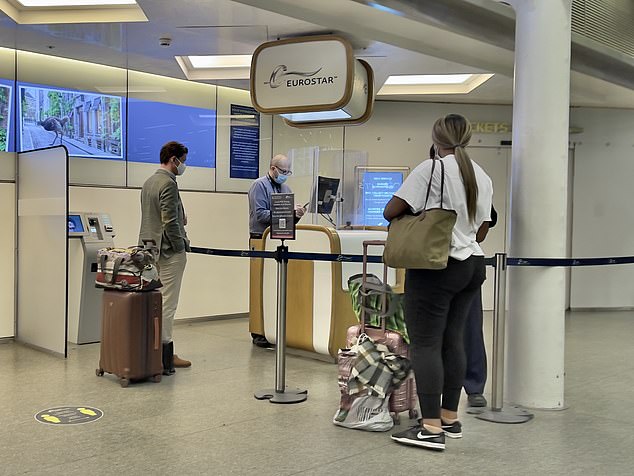 All travellers are also required to do a pre-departure Covid test 48 hours before their journey, rather than 72, and must quarantine for seven days upon arrival

‘Normally, before Covid hit, we would both be travelling back and forth on a monthly basis – even last year.

‘I was going to visit him today, but I’ve just missed my train because the border officer said I did not have a valid reason to travel.

‘But online it says you can go see someone if you are married or if you have lived together in the past, as long as you have the right documentation.

‘We rent a flat together so I brought all my papers with me today and I’ve got my negative test and everything.

‘But at that point I started to panic because the guy said ‘you can’t come in unless you have an address in France’.

‘I asked him to speak with my boyfriend, but I think he thought I was lying because he kept trying to correct me saying ‘you mean friend’.

‘Now he’s agreed to let me through, but my boyfriend needs to write a letter confirming we are together and for how long, and then take a picture with his passport. 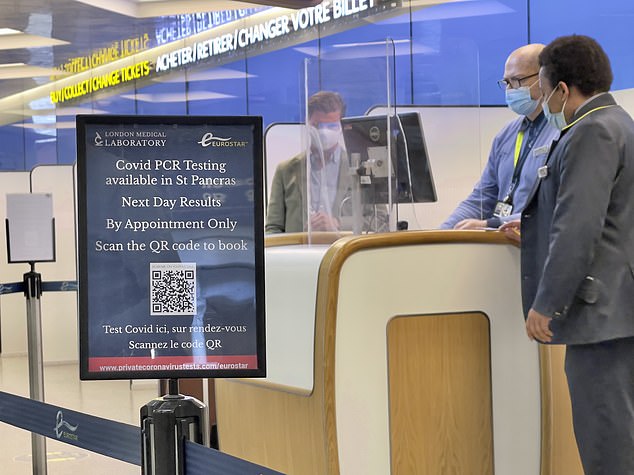 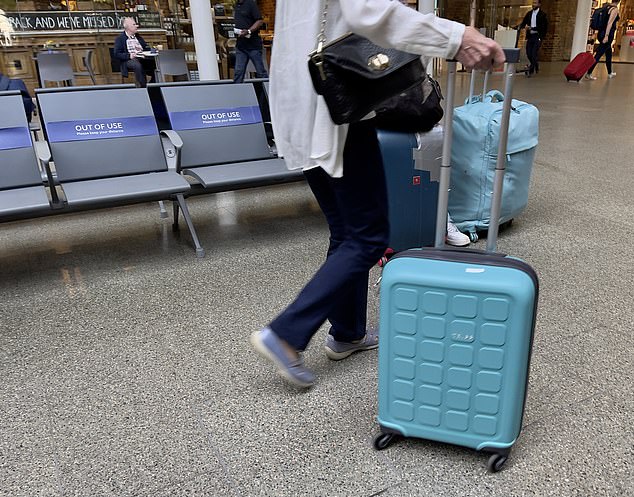 ‘I’ve been watching the news and I know it was announced last Thursday, but I thought the only additional barrier was a 10 day quarantine.

‘What I didn’t see was all of the small print, so to say, and that’s quite frustrating because if I had known, I could have had the documentation ready.

‘I don’t think the new rules have been communicated properly, because I wasn’t aware there was a significant rule change.

‘To me, it seems the new rules seem to just be a tit for tat rather than a legitimate reason.

‘I get there is an Indian variant, but I’ve come here with a negative test, which mitigates that and I should have a right to visit someone who I’m in a long term committed relationship with.

‘Many of my friends and the people I know have broken up in the last year because they have been stuck in a flat together or they can’t see each other – it’s like a double edged sword.’

Another passenger Sacha, 26, who is taking her sister to Belgium for medical reasons, said: ‘I’m trying to get to Brussels because my sister has a surgery scheduled for tomorrow 7:00am. 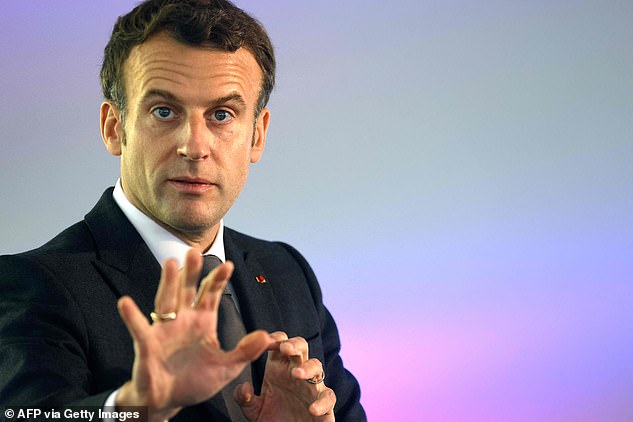 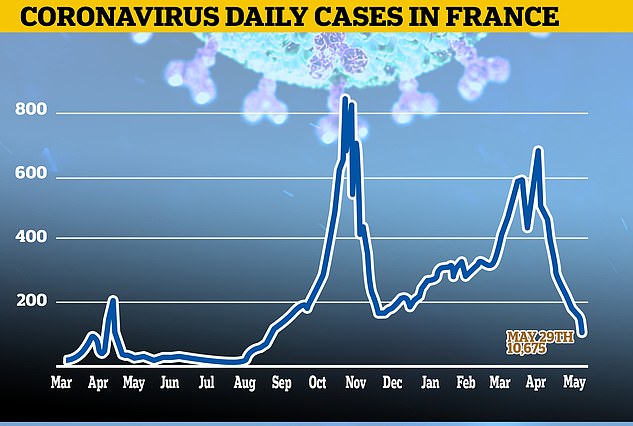 ‘I did my PCR test on Friday because it has to be done 72 hours before you get to Brussels, so I couldn’t have done it any earlier.

‘I was suppose to have my results back by Saturday 4pm, but they never arrived and it’s now Monday and I’ve missed my train.

‘So I’ve paid £200 for another test in London which takes just three hours, because I thought I could get the train to Paris instead.

‘But they’ve now said, as of today, that I can’t because the rules have changed overnight, so basically I’m stuck and have to get a train direct tomorrow.’

Elise Falgueirettes, 29, from Battersea, south London, who works in advertising and was travelling to Bourges in France for her father’s funeral, said: ‘My father passed away from a brain tumour a few days ago, so we have a valid reason for travelling.

‘We’re suppose to be locking down for seven days – so we will be doing that, except for the funeral.

‘We managed to go see him three weeks ago, but obviously we didn’t have to quarantine or anything then.

‘The only crunch with travelling these days is the added cost, because it makes small trips like this rather expensive.

‘I think it’s a good thing, but for people who really need to travel, the rules make things harder.’ 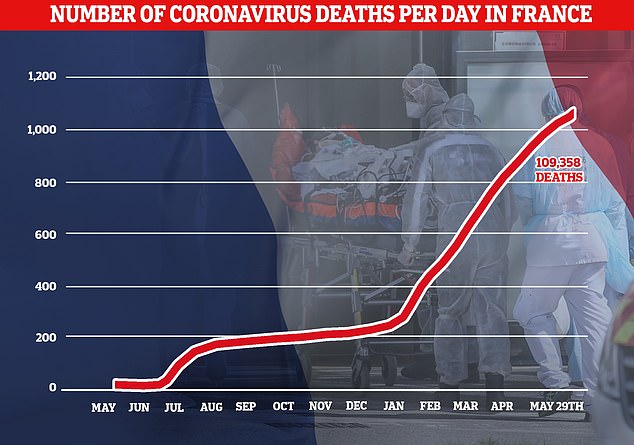 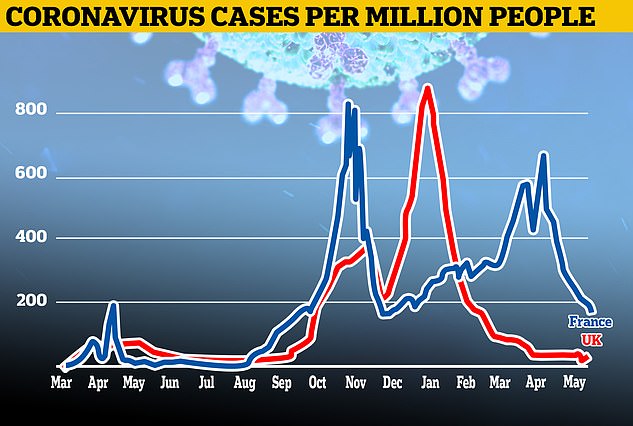 George Roederer, 27, a railway engineer who was travelling to Paris, said: ‘I have been travelling back and forth to France since February for work and it’s been fine, except for the last minute rule changes.

‘I learnt yesterday that the Covid test must be done within 48 hours instead of 72 hours, so I don’t know if they will let me through.

‘I don’t see what reducing the timeframe of the test is necessary, and not giving anyone notice is forgetting people’s reality.

‘They didn’t even contact me, I had to go find it on the Embassy’s website, which many people won’t have done.

‘I’m definitely not going to be the only person in this situation, so hopefully they will be understanding.’

Guillaume, 30, an academic researcher from Tour in France, said: ‘I did my CPR 51 hours ago, which means it’s no longer valid, but they are accepting antigen tests now, which you can do here in 15 minutes – but it costs around £60.

‘I think it’s justified because obviously the Indian variant we don’t know much about it and apparently it spreads faster.

‘But just updating the Embassy website a few days before and not telling anyone, that wasn’t great

‘The fact that EU borders are open but not with the UK shows that politics are clearly at play here.

Sachs, 35, from Paris said: ‘What’s strange, is that it seems you have different information on the Eurostar website and the French Embassy’s website.

‘One says you need a CPR test 72 hours before travelling and the other days 48 or just an antigen test.

‘So I don’t know what problems I’m going to have when I get to the border because they’re not updating their guidance.

‘It’s scary for people who don’t know what’s going to happen or what they need to travel, and it adds a lot of stress.

‘I am following the most reliable source, which is the French embassy’s website, so I’ve taken a screen shot.’

France is currently listed as an ‘amber’ destination by the UK Government, which means people are being advised against travelling there – while those who do must self-isolate for 10 days and take two tests on return.

Stricter rules for visitors from the UK were first raised by French foreign minister Jean-Yves Le Drian last week amid concern over the Indian variant.

An explanation of the new rules on the website of the Consulate General of France in London said: ‘Given the development of the so-called Indian variant, health measures have been tightened for people travelling to France from the UK.’

It added that from this morning ‘compelling reasons will be required for foreign nationals outside the EU not resident in France to travel to France from the UK’.

The website said ‘a PCR or antigen test less than 48 hours old will be required from anyone travelling to France from the UK’ while on arrival ‘travellers are obliged to self-isolate for seven days’.

The information added that ‘due to the low incidence of coronavirus in the UK, for the moment they will not be subject to systematic checks where they are staying’.

France’s move follows Austria, which said on Tuesday it was banning UK direct flights and tourists, and Germany, which said on Friday that anyone entering from the UK would have to quarantine for two weeks on arrival.