A note at the front of the dinner menu at pioneering two-Michelin-star Oxfordshire restaurant Belmond Le Manoir aux Quat’Saisons says: ‘Children of any age are not only accepted, they are welcomed.’

Foodie parents… cancel the babysitter, because this is no empty promise, with the welcoming attitude to little ones coming right from the top – Chef Patron Raymond Blanc.

I saw the French superchef’s heartwarming love of children first-hand during a recent highly memorable dinner and overnight stay at Le Manoir (known mainly for the cuisine, it’s held two Michelin stars since it opened in 1984, but which also offers 32 well-appointed rooms and suites).

Ted Thornhill checked into ‘Le Manoir aux Quat’Saisons, A Belmond Hotel’, pictured, with his partner and five-year-old daughter, Emma. The dinner menu at the Oxfordshire property’s revered two-Michelin-star restaurant states: ‘Children of any age are not only accepted, they are welcomed’ 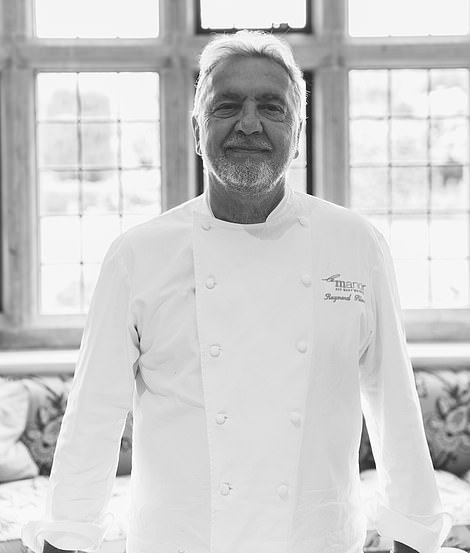 Monsieur Blanc popped in to say bonjour to me, my partner and our five-year-old daughter, Emma, during a cookery lesson we had with Mark Peregrine, the hugely talented director of the in-house cookery school which, thrillingly, is set within the two-star kitchen itself.

Chef Blanc focussed all his attention on Emma, who was entranced as he stressed to her that children can make themselves right at home in his restaurant, where there’s even a kids’ menu.

She would soon be making her choices from it, but first there was important work to be done on the sponge front – she thoroughly enjoyed mixing icing sugar, caster sugar, flour and whisked egg whites to make financier cakes topped with almonds and blueberries.

(While, confession, we parents sipped a couple of nicely crafted cocktails courtesy of Le Manoir’s dapper mixologist, Tom Hollywood, who also stopped by.)

Once Mark had expertly finished off the cakes, we made our way to the hallowed ground of the main dining room – with Emma in tow.

We were a bit nervous that she might have a meltdown over something random and embarrass us. 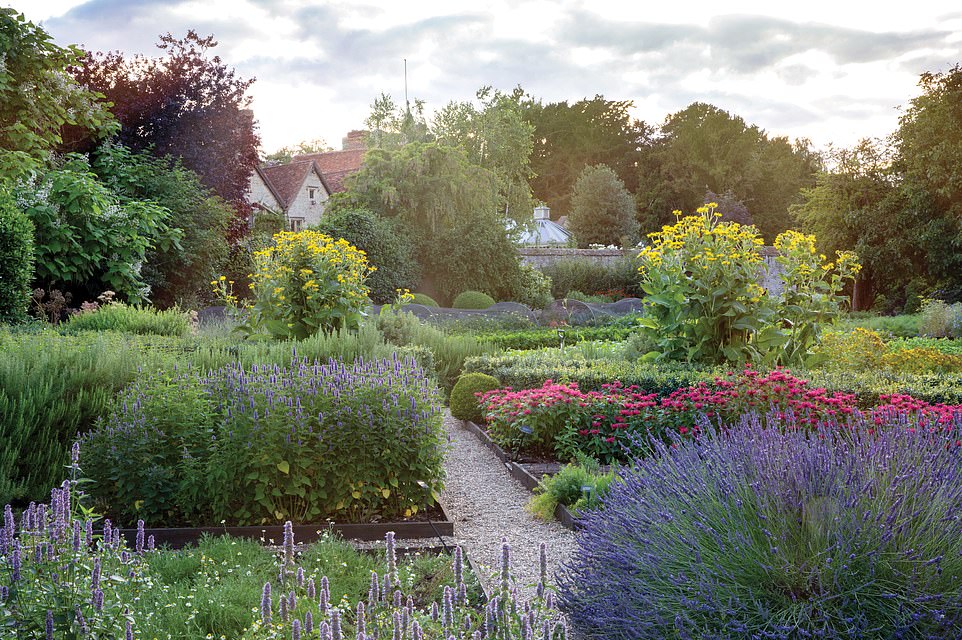 Le Manoir is known mainly for the cuisine, but also offers 32 well-appointed rooms and suites 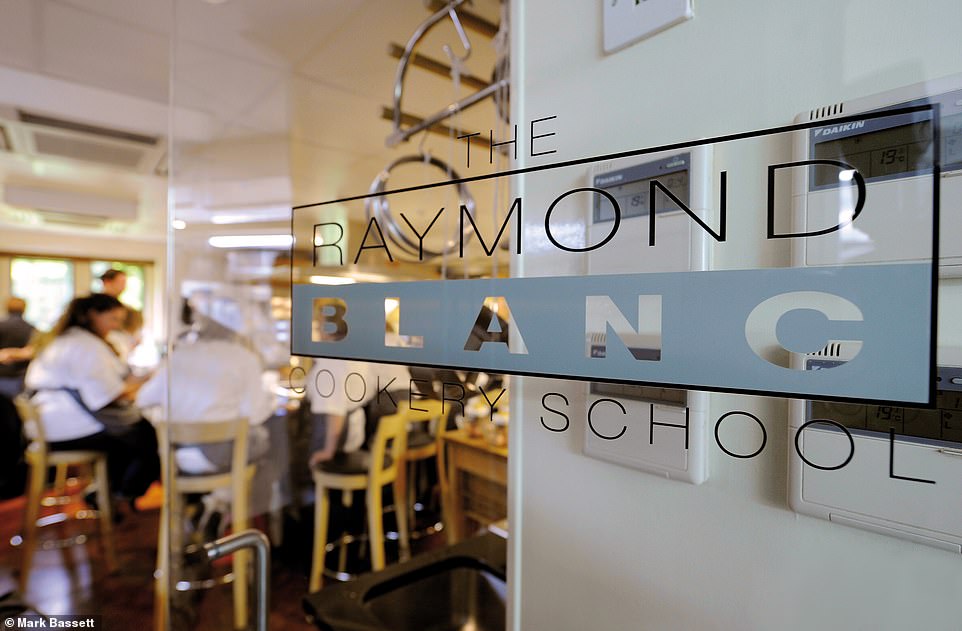 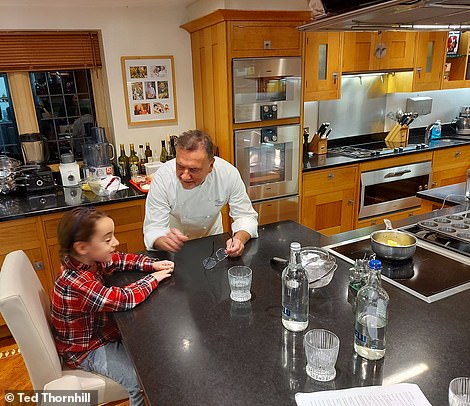 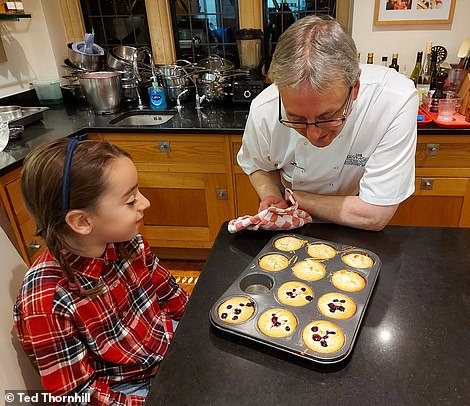 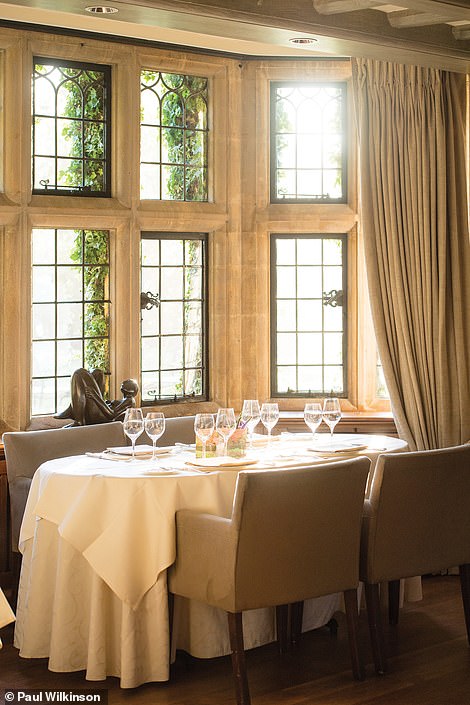 Past tantrums have erupted over the colour of the milk bottle being ‘wrong’ (pink), her Halloween witch’s dress going in the wash (she’d worn it day and night for four weeks) and being prised away from a statue of the mouse from the Gruffalo book in London’s Kew Gardens after she’d hugged it for 20 minutes.

As with any little one, the spark that lights the blue touch paper can come from almost any source.

In the end, all was well.

Yes, the dining room was full of guests dressed to the nines, ready for the meal of a lifetime – but the atmosphere was relaxed and convivial, the tables separated by plenty of space and, praise be, there were children present at a couple of other tables.

And Emma, who can switch from loving an ingredient to hating it in the blink of a My Little Pony’s eye, was delighted at the prospect of her main course – roasted free-range chicken breast served with chips and vegetables.

The children’s menu is priced at £24, with roasted tomato soup or scrambled eggs and smoked Glenarm salmon for starters – and, endearingly, a selection of fresh organic vegetable purees for babies can be cooked to order on request.

The other main-course options for Emma were goujons of sole with tartare sauce and pan-seared market-fresh fish.

And for the most important course, no child is going to be disappointed. 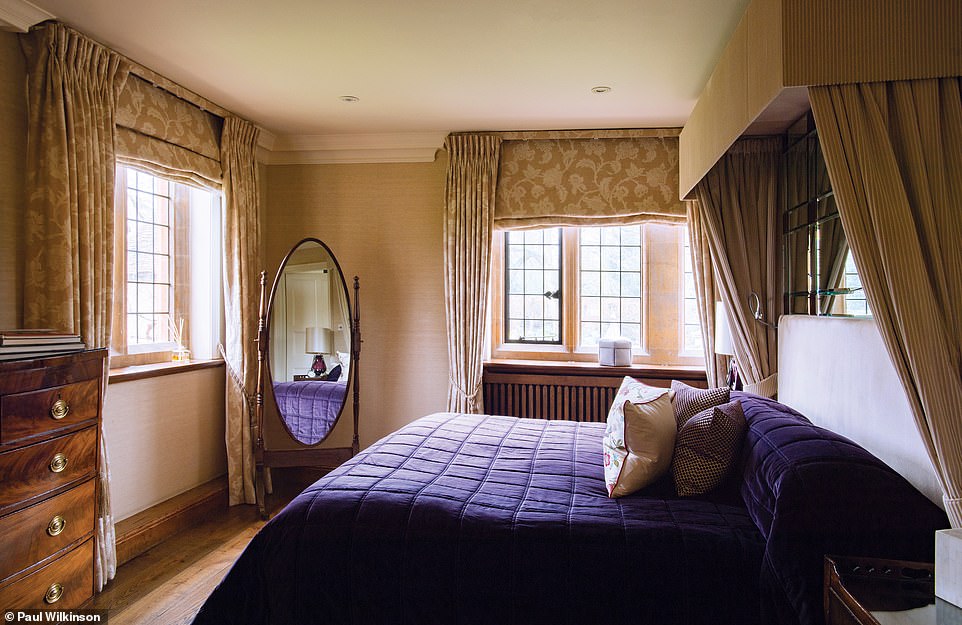 To the Manoir born: Ted and his family stayed in the ‘elegantly luxurious’ Lavande’ suite, above 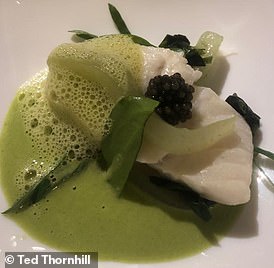 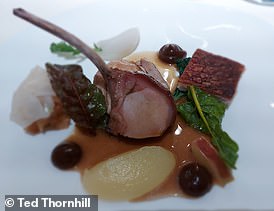 As the menu says: ‘Le Manoir is the kingdom of desserts. We do the best ice-creams, cakes and chocolates. Bon appetit les enfants!’

The chicken proved to be 100 per cent tantrum-proof – succulent and beautifully cooked.

But we weren’t going to take any chances and the headphones and Netflix children’s cartoons were deployed for her while we adults took a journey into food and wine nirvana.

There was Le Manoir’s take on French onion soup, served in a bone china teacup and made with rich Baron Bigod cheese and a potato foam; hand-dived scallops sliced and marinated in citrus juice and served with grapefruit and French caviar; a stupendous flavour-bomb risotto of foraged mushrooms with rice cooked in mushroom stock; and poached turbot served with a cucumber and wasabi sauce.

Following this came melt-in-the-mouth suckling pig, paired with apple sauce made from the restaurant’s orchard apples and prune ketchup – and not one but a brace of desserts.

Liquid refreshments came in the form of the entry-level ‘selection classique’ (£129) wine pairing, consisting of five 125ml glasses (there are two other levels – ‘Prestige’ at £299 per guest and ‘Exceptionelle’ at £999 per guest).

Believe me, the cheapest selection is still an extraordinary experience.

There was a Pinot Blanc Les Jardins 2020 by Domaine Ostertag in Alsace, France (very moreish); a creamy white Burgundian Chardonnay, a Chassagne-Montrachet 2020 by Domaine Fernand & Laurent Pillot; another white in the form of a Gruner Veltliner Renner 2020 by Schloss Gobelsburg, Kamptal, Austria; a delightfully herbaceous Gevrey-Chambertin Les Gueulepines 2019 Pinot Noir from Burgundy (made, incidentally, by an Australian – Mark Haisma), and a knock-out chilled red dessert wine from Roussillon in France – a Banyuls Rimage 2021 by Domaine du Traginer.

Emma had fallen asleep at our table’s banquette by the time we reached our puddings and the dessert wine and missed out on her ice cream.

But sweet treats were in store for her the next day – those cakes she helped make had been delivered to our elegantly luxurious suite, ‘Lavande’.

We all slept like babies, Emma in a sofabed the turn-down team prepared, and us in a dreamy king-sized bed (though we had to cover one of the shelving spotlights with a book because we couldn’t find the switch, which turned out to be on the frame to the side).

Some guests at breakfast (back in the main dining room) picked up from where they’d left off the night before – the chap next to me was on the mimosas.

As well as the drinking, he gamely kept the conviviality up and running, too, chirpily admitting to me that after dinner the night before he ‘could not remember going back to the bedroom’.

I stuck to coffee with my order – a croissant so perfect you could hang it in an art gallery and gourmet eggs Benedict.

As well as orchards, there is a serene Japanese tea garden and ponds fed by natural springs that were created by monks who occupied the site in the 16th century. 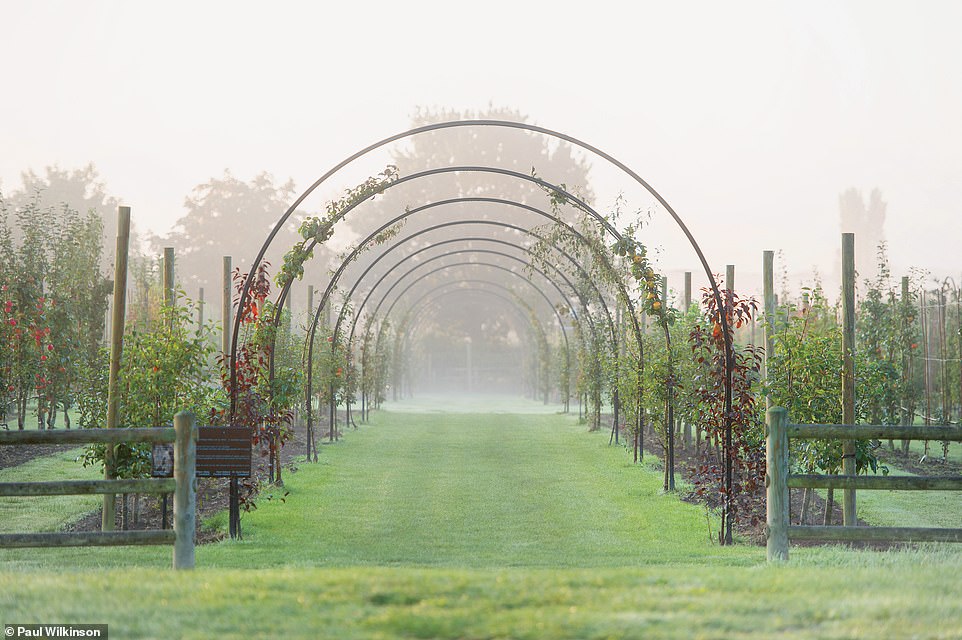 Manoir from heaven: There are orchards, a serene Japanese tea garden and ponds fed by natural springs that were created by monks who occupied the site in the 16th century 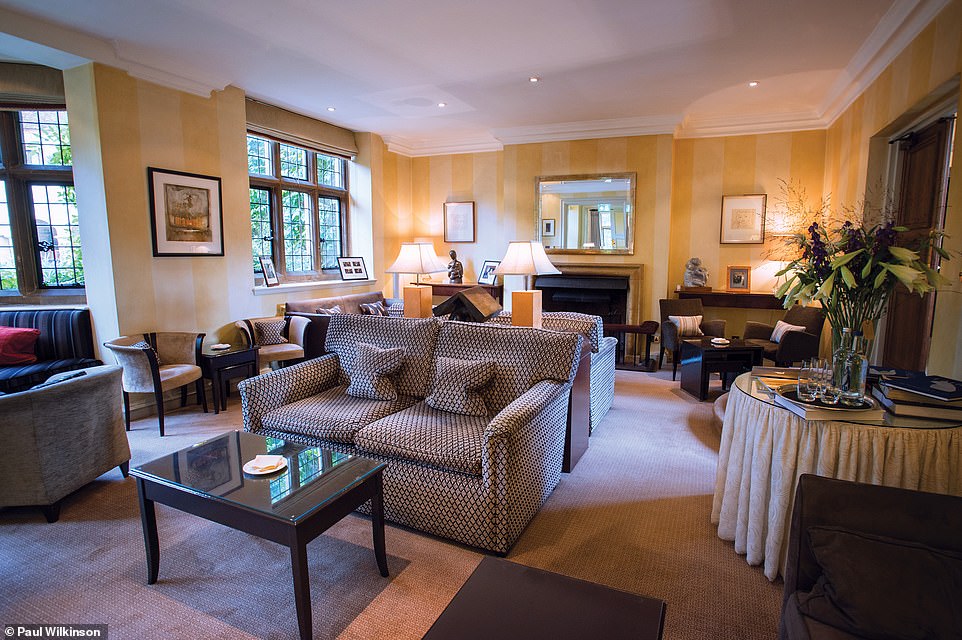 The lounge, above, is a popular spot for the quaffing of an aperitif or two before dinner. There is also a bar menu available 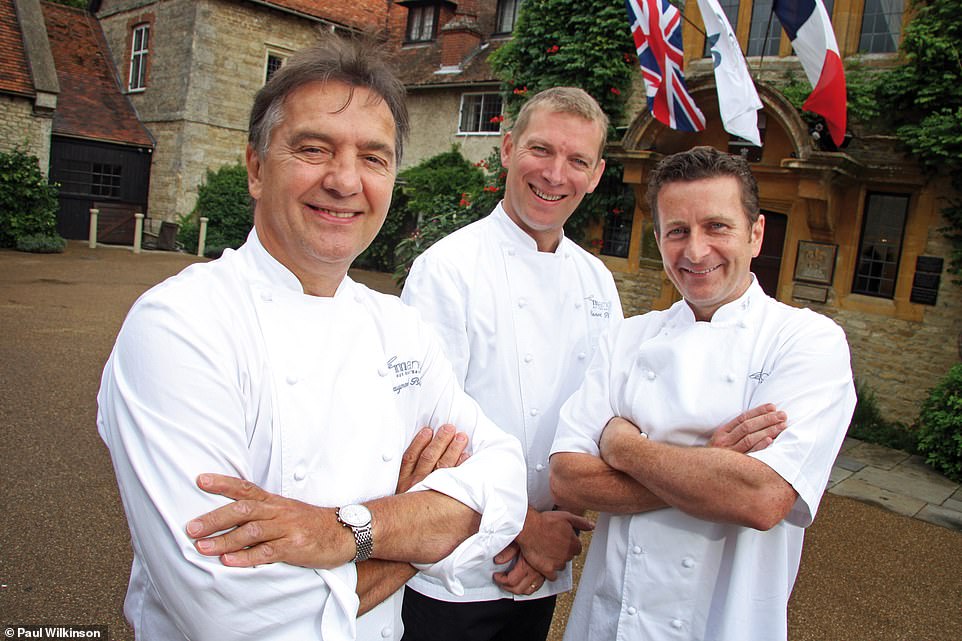 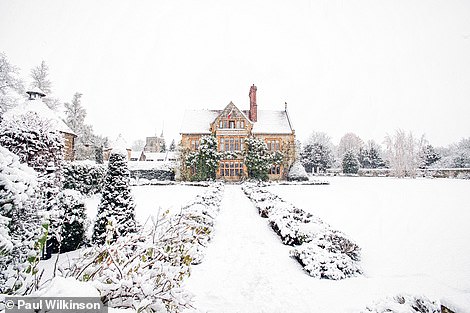 The fairy dust at Le Manoir is the team, says Ted. They believe wholeheartedly in the generosity of spirit championed by Raymond Blanc

Come lunchtime and we were still clinging on to the place, relaxing in the inviting lounge and perusing the bar menu after we’d handed in our key.

Just what is it that makes the place so captivating? This recollection has failed to mention one of the key factors.

Yes, there’s the gorgeous setting – the honey-hued manor house and magical gardens in the cute village of Great Milton – the ridiculously fine cuisine and the swanky rooms.

But it’s the team here that’s the fairy dust, a team that believes so wholeheartedly in the generosity of spirit championed by Raymond Blanc.

From the receptionists to the expert sommeliers, it’s always service with a warm smile.

CONS: None, unless you only dine at three-Michelin-star restaurants…