No turkey for Nigella! Chef reveals she’s parting with tradition because ‘it’s not a normal family Christmas’ – and will serve pork for dinner instead

Christmas dinner with extended family might have to be put on the back burner, but many of us will stick to a traditional menu in a bid for some normality.

Not Nigella Lawson, though. The TV chef has revealed that for the first time she won’t be cooking turkey – but will have pork.

Miss Lawson said she understood those who want to ‘cleave to the traditions’ but, for her, it just didn’t feel right.

She explained: ‘It’s not going to be a normal family Christmas, therefore I think I will feel less sad doing something that is just a lovely lunch, that takes in a few Christmas traditions from elsewhere that interest me, but not make me feel what’s missing.

‘One of the things I think we’ve all realised is how we miss having people round our table.’

Miss Lawson, 60, also spoke about being alone during the pandemic, telling BBC’s Newscast podcast: ‘I haven’t been lonely once. I have been very happy. I’ve rather enjoyed it.’

It comes after Nigella struck a chord with home cooks across the nation when she branded carrots cut into rounds ‘infinitely depressing’. 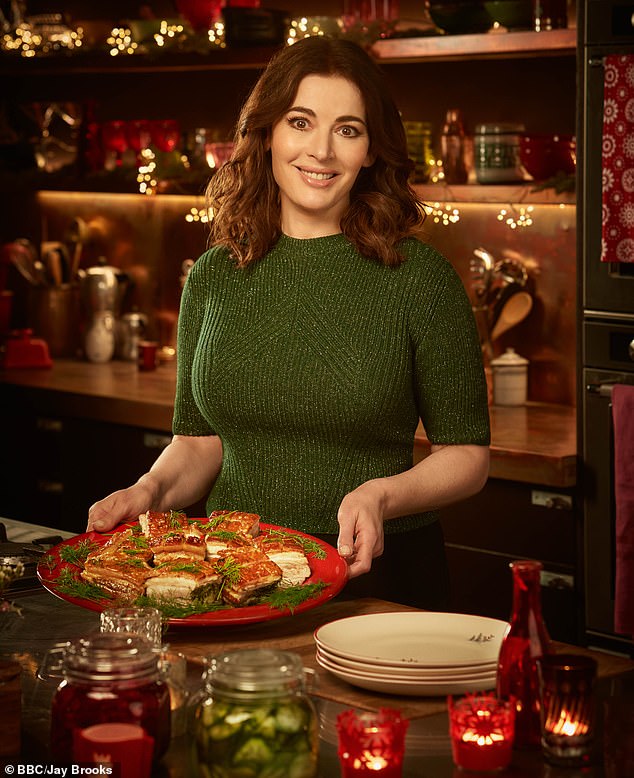 Speaking on her BBC2 cooking show Cook, Eat Repeat, the London-born domestic goddess insisted the vegetable should be sliced into batons.

The glamorous chef made the comment while preparing her ‘family favourite’ dish, chicken with orzo – a ‘one pot dish designed to bring comfort and joy’ and ‘one of the mainstays of her life’.

After browning the whole bird in a pan, Nigella took it off the heat and added plentiful grated lemon zest, garlic, a sprinkle of dried tarragon, chopped leeks and carrots.

While arranging the root veg, she remarked: ‘I have been quite open about my prejudices over the years, but let me just say again, that I find carrots cut into rounds infinitely depressing, so it’s always batons for me.’