A nine-year-old boy was hit and killed by lightning at a football training session after the weather changed suddenly, an inquest has heard.

Jordan Banks was struck by lightning while taking part in a football coaching session on the Common Edge playing fields in Blackpool on May 11 as his stepfather watched.

An inquest at Blackpool Town Hall on Wednesday, which Jordan’s family did not attend, heard the weather had changed in the last ten minutes of the training session.

Coroner Alan Wilson said the Met Office’s forecast suggested there would be thunder and lightning between 3pm and 6pm but the conditions were not thought to be bad enough to warrant a severe weather warning.

Mr Wilson said: ‘This was an extremely rare occurrence. Although the weather had changed, it had changed very quickly and there appears to be no obvious reason why Jordan was struck by lightning.’

The lightning strike that killed a nine-year-old Jordan Banks as he played football was ‘extremely rare’ and happened after the weather changed ‘very quickly’, an inquest has heard 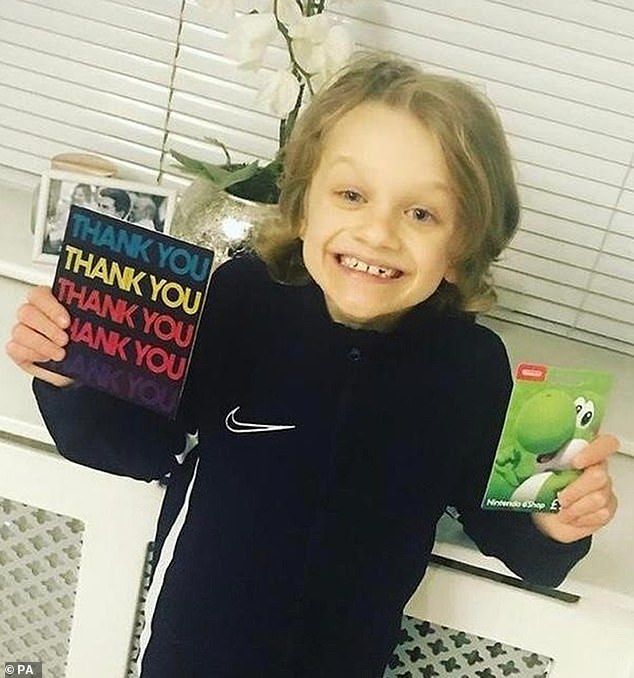 The inquest heard Jordan’s stepfather Daniel Begg had been in his car watching Jordan training on the pitch, on School Road, when lightning struck shortly before 5pm

Mr Wilson, who recorded a short narrative conclusion, said he planned to write to the Government’s department for Digital, Culture, Media and Sport and bring the matter to its attention.

He said: ‘If a reminder about the risk lightning can pose is circulated and this somehow minimises the risk that this could occur again then that would be positive and avoid another family having to go through this sort of tragedy.’

He thanked the family for their ‘dignity and courage’ in choosing to donate Jordan’s organs.

The inquest heard Jordan’s stepfather Daniel Begg had been in his car watching Jordan training on the pitch on School Road, when lightning struck shortly before 5pm.

His statement was read out in court describing how he saw the youngster collapse.

Mr Wilson read: ‘He saw lightning hit Jordan and he fell to the ground straight away.’

He told of the frantic scenes as he ran over and began CPR on the child in a bid to save his life, as 999 was called.

Football coach Daniel Stenton, who was taking the session with Jordan, said in a witness statement they had decided to finish the training session when thunder started.

He said: ‘All of a sudden I felt something. I can’t begin to explain it but it made me put my hands on my head.’

Emma Gleeson was waiting to take her son to a training session when she saw a flash of lightning hit Jordan, the court heard.

In a statement, Ms Gleeson, who rang an ambulance, said she saw Jordan fall to the floor and Mr Begg run to him.

She said: ‘Daniel (Begg) clearly was thinking the same thing I was thinking and was saying: ‘He’s gone, he’s gone’.’

The inquest also heard a statement from paramedic Sharon Riley-Clarke, who said she and her colleague were called to the scene shortly after they witnessed a ‘loud and violent’ sudden lightning strike nearby.

She said when they arrived at 5.01pm she saw Mr Begg crouched over Jordan in the field and he shouted to them: ‘He’s not breathing.’

She added: ‘He picked him up in his arms and was running to us.’ 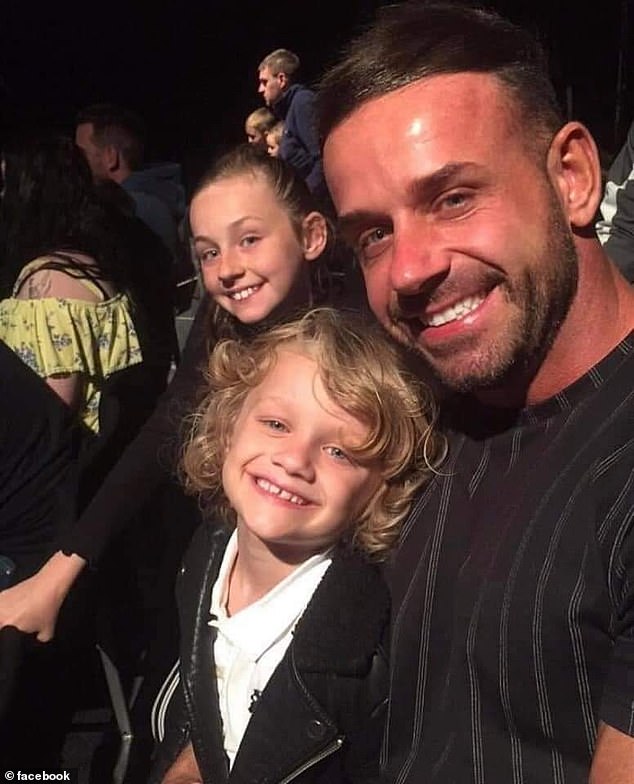 The coroner’s court heard Jordan arrived at Blackpool Victoria Hospital at about 5.30pm but was pronounced dead at 5.55pm.

Mr Wilson said: ‘All evidence indicates that once Jordan had been struck by lightning this was effectively going to be unsurvivable.’

The inquest heard a statement from Met Office scientist Alan Day, who said possible thunderstorms had been forecast but no severe weather warning was issued as the overall risk fell below the levels required.

In a moving tribute in May, Jordan’s mother Danielle Begg, 38, described how ‘everyday is a struggle’ as she and her family continued to come to terms with the death of her ‘irreplaceable’ son after he was killed while playing football in Blackpool.

She and her family were doing all they could do ‘keep going for Jordan and carry on his legacy’. 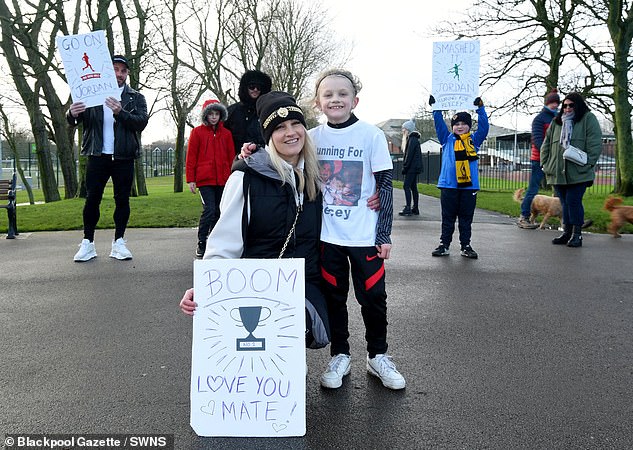 Danielle Begg (pictured with son Jordan), 38, paid tribute to her nine-year-old son Jordan Banks who died after being struck by lightning 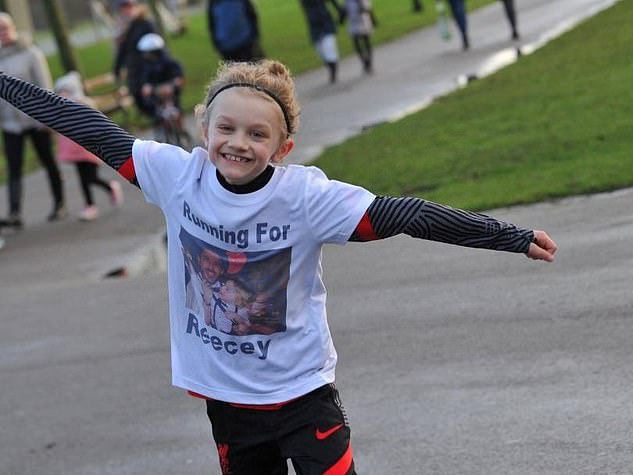 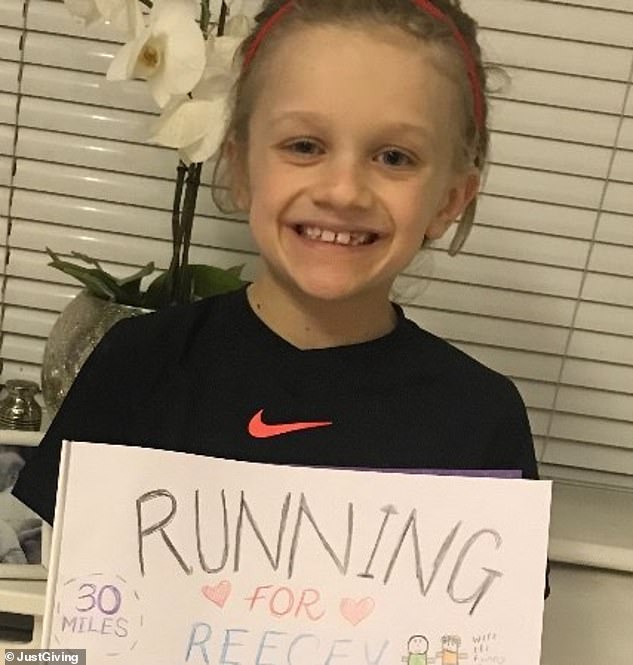 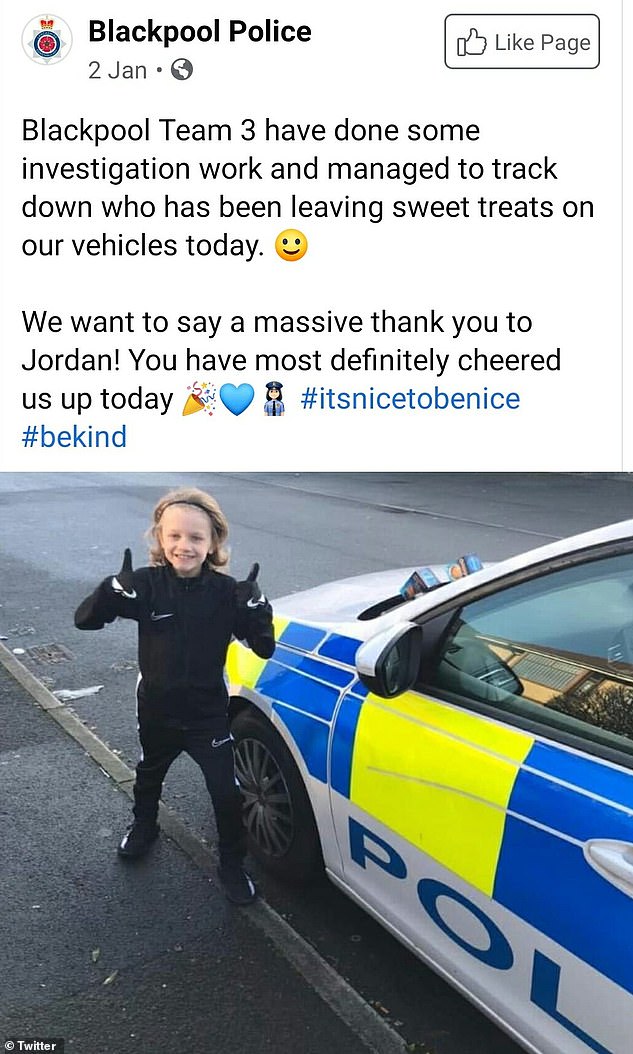 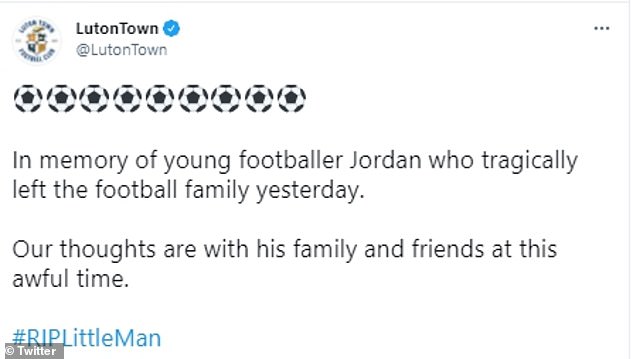 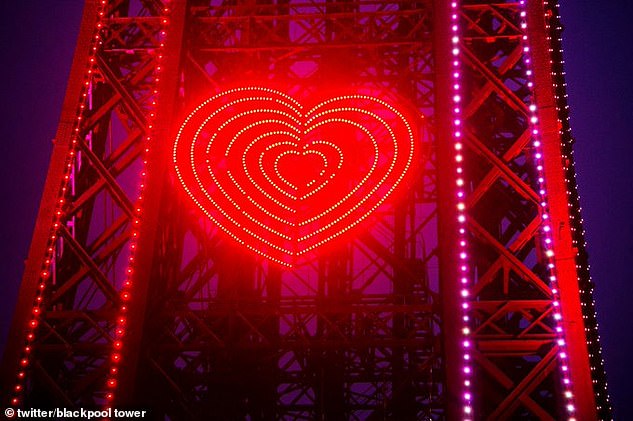 Liverpool fan Jordan played as number 7 for the Clifton Rangers Bees Under 9s side and was having one-on-one coaching at the time of his death.

Following his death, hundreds paid tribute to the fundraising hero, who left sweets for 999 workers during lockdown and ran 30 miles to fundraise for mental health charities in honour of his uncle who took his own life, by posting nine ball emojis on Twitter.

Sir Kenny Dalglish, James Milner and Robbie Fowler were among Jordan’s LFC heroes to pay tribute to him along with stars of his favourite TV show Cobra Kai.

The reds wore Jordan Banks, number 7, shirts ahead of their clash with Manchester United on May 13.

Blackpool tower was illuminated red on May 12 in tribute to Jordan.

Liverpool players warm up wearing T-shirts with Jordan’s No.7  on their backs in honour of the nine-year-old Liverpool fan 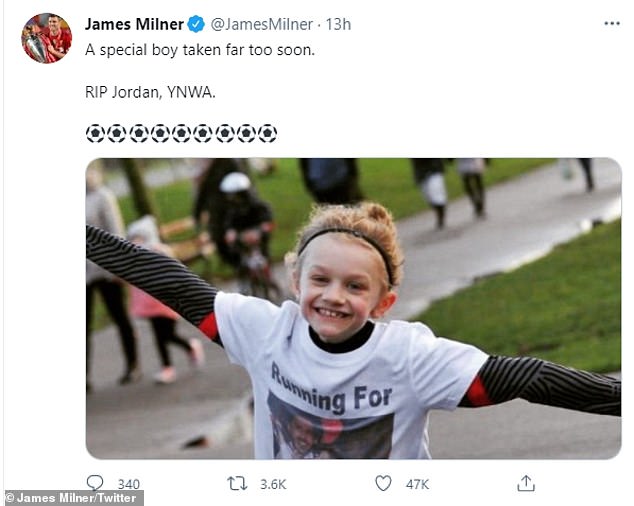