Labour and the Tories are neck and neck in DOZENS of Leave-voting seats where the Brexit Party has surged, poll reveals as Nigel Farage prays for SNOW to boost his chances

Nigel Farage could scupper Boris Johnson’s hopes of winning a majority at the general election tomorrow with Labour and the Tories neck and neck in dozens of seats.

A new YouGov survey showed there are 85 constituencies where the leading party is ahead by five per cent or less which means the result is on a knife edge.

And in many of those seats the Brexit Party is standing a candidate, with Tories concerned that could be enough to split the Leave vote and allow a Labour victory.

Meanwhile, Mr Farage said today that he is hoping for snow or heavy rain on polling day tomorrow in order to boost his party’s chances of winning seats.

He believes his supporters ‘absolutely believe in our message’ and would not be deterred by bad weather whereas people who are less committed to backing the Tories or Labour might not bother to vote.

The YouGov poll suggested that the Tories are on course to end up with a 28 seat majority, potentially finishing with 339 MPs to Labour’s 231.

But the margin for error on the survey means the Tories could finish between 311 seats – not enough for a majority – and 367.

Mr Farage’s comments came as all the leaders of the main political parties embarked on their final campaign stops before the election.

But Mr Johnson’s day got off to a disastrous start after he refused to do an interview with ITV’s Good Morning Britain programme and one of his aides swore on live television.

Nigel Farage, pictured at one of his final election campaign events in Doncaster today, said he is hoping for snow tomorrow to boost his chances of winning seats 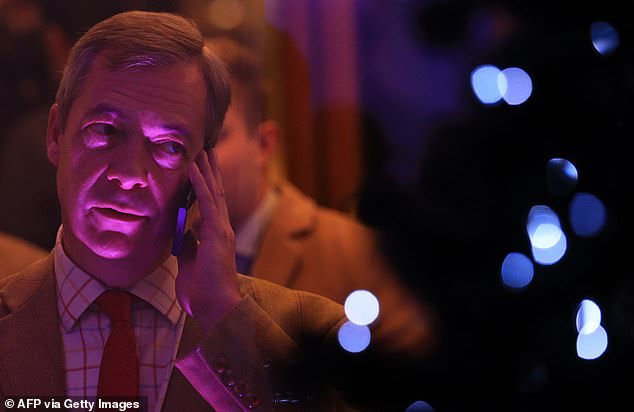 Mr Farage, who is not standing to be an MP, is fielding candidates in numerous seats where polls suggest the Tories and Labour are neck and neck

Mr Farage changed the shape of the general election campaign when he announced midway through that his party would not stand candidates in the 317 seats won by the Tories in 2017.

However, the Brexit Party is still contesting the vast majority of Labour-held seats, including many marginals which Mr Johnson will need to win if he is to get the majority he craves.

But the YouGov poll suggested the battle is extremely tight in numerous seats with the final result still unpredictable.

Of the 85 close seats identified by YouGov, the Tories are ahead in 25 of them with Labour in second while in 31 seats Labour is narrowly up on the Conservatives.

The Brexit Party could therefore play a huge part in tomorrow’s result with candidates standing in a number of the hotly contested seats.

For example, in the Labour-held constituency of Bolsover the Tories are up two points on Mr Corbyn’s party but Mr Farage’s vehicle is on 12 per cent overall.

In the Labour-held seat of Workington it is a similar story, with Labour up two points on the Tories and the Brexit Party on eight per cent overall.

Mr Farage said today the quality of the election campaign had been ‘pretty appalling’ and had comprised of ‘meaningless statements’ and ‘a whole bunch of conspiracy theories’. 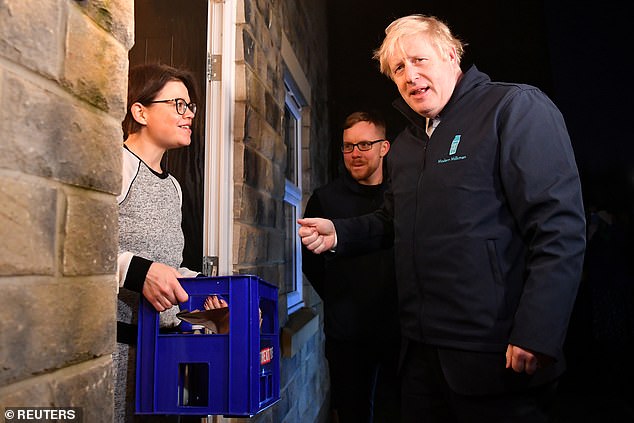 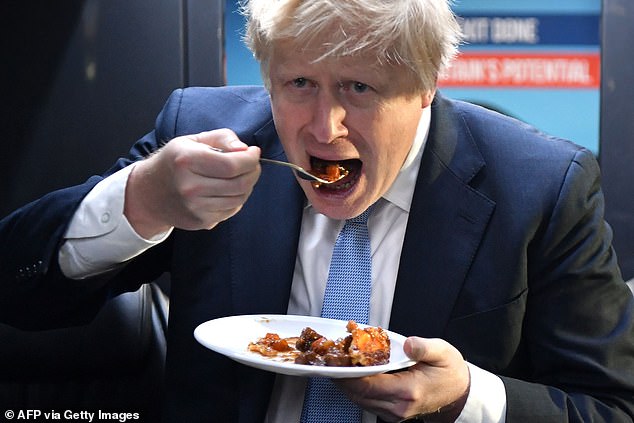 He also said he had a ‘hunch’ that turnout will be low tomorrow, partly because of the weather and partly because people are being asked to vote ‘again and again’.

The Brexit Party leader added: ‘I’m hoping for very, very heavy rain in Doncaster tomorrow, or snow, whatever we can muster.

The YouGov poll has the Brexit Party on three per cent support nationwide but Mr Farage is hoping to defy the numbers and win a number of seats.