‘Pregnant in a bikini!’ Nicole Williams proudly shows off her baby bump as she is expecting her first child with Larry English… after fertility struggle

By Jarret Thomas Sackman For Dailymail.Com

Posing poolside with her belly on full display, the 34-year-old model also flaunted her blinding 5.14-carat oval diamond engagement ring from her husband Larry English, 36. In her caption she said she was pregnant while in a bikini.

These new images have been posted to Instagram after a grueling IVF journey for the 2023 Sports Illustrated Swimsuit Rookie and her former NFL player.

Pregnancy glow: Nicole Williams basked by the pool, caressing her bump with her massive Ritani diamond engagement ring in new images shared to Instagram on Tuesday

Nicole has been very open about her fertility struggles in the past.

‘So, I wasn’t going to post this,’ she shared on Instagram, ‘but I decided it’s an important step to this whole fertility journey and although it’s not glamorous, it’s real life.’

‘This was my egg retrieval day!’ she declared in the candid post. ‘I was an emotional mess because on top of being hormonal, I had just broken my foot and I’m also scared to death of needles.’ 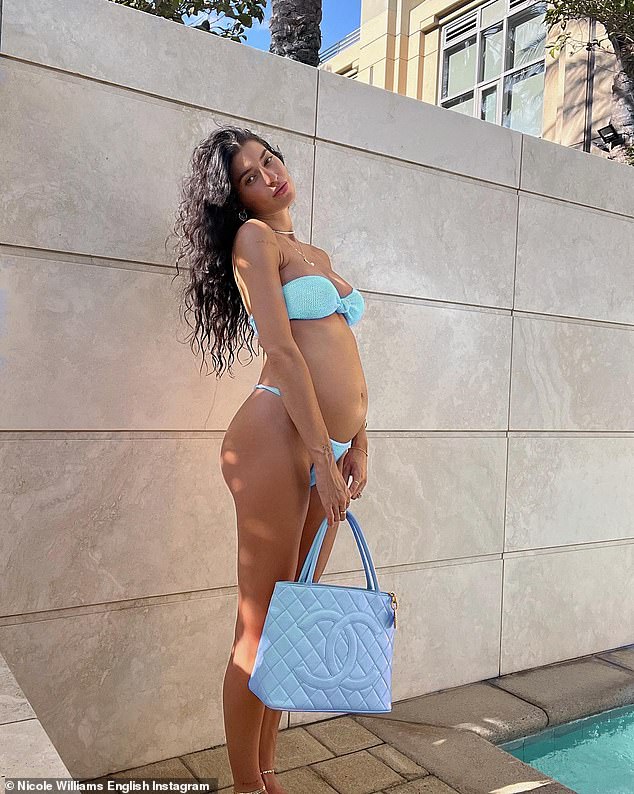 Swimming in Chanel: Nicole sported a blue Chanel tote bag from The Lux Rewind, a vintage store in Boston that specializes in preowned luxury bags

The soon-to-be-parents tied the knot back in 2017 after five years together.

Their Laguna Beach wedding at the luxurious Montage hotel took place one year after the couple’s engagement in Thailand.

‘My heart is so full!’ gushed Nicole on Instagram after English popped the question. ‘I get to marry best friend! Pinch me! ekkkkk!’

The couple met in 2011 at a mutual friend’s birthday party in Los Angeles where the former linebacker’s impressive physique caught Nicole’s eye. 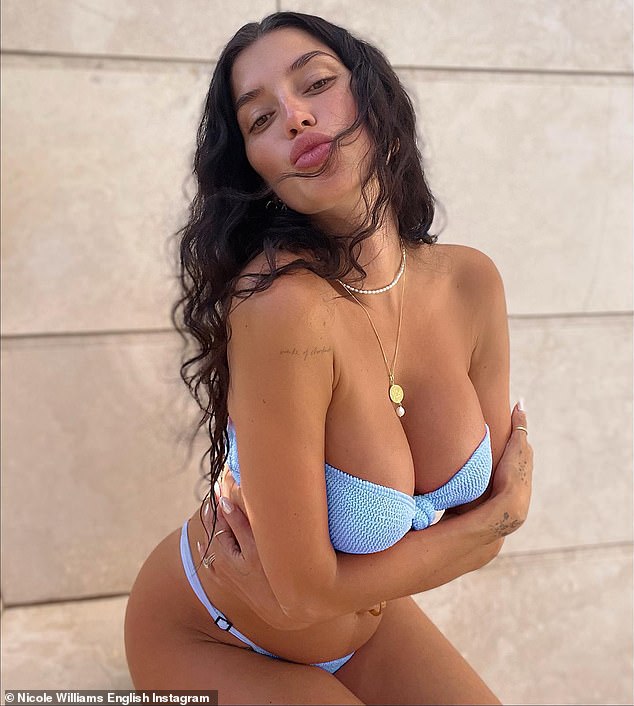 Celebratory kiss: The reality TV star blew the camera a kiss and cradled herself after a long IVF struggle proved successful

This will be the first child for the pair, but they are also parents to their two beloved Frenchies, Jasmine and Ace.

‘They’re our children,’ she shared to Upscale Living long before her IVF journey began. ‘They’re probably the reason I don’t have any human babies yet, because I can’t imagine loving anything more than them, so it’s holding me back!’

Raising a family will be a huge new addition to the couple’s hectic lives. In addition to her thriving modeling career, Nicole has her own clothing line called Nia Lynn and her former San Diego Charger has ventured into real estate by founding his own property company.

The former reality stars revealed the gender of their child on Instagram in the sweetest of ways earlier this month by posting a video of them posing by their pool. The video begins in black and white before fading into color, revealing that their swimsuits are pink and that they are having a girl. 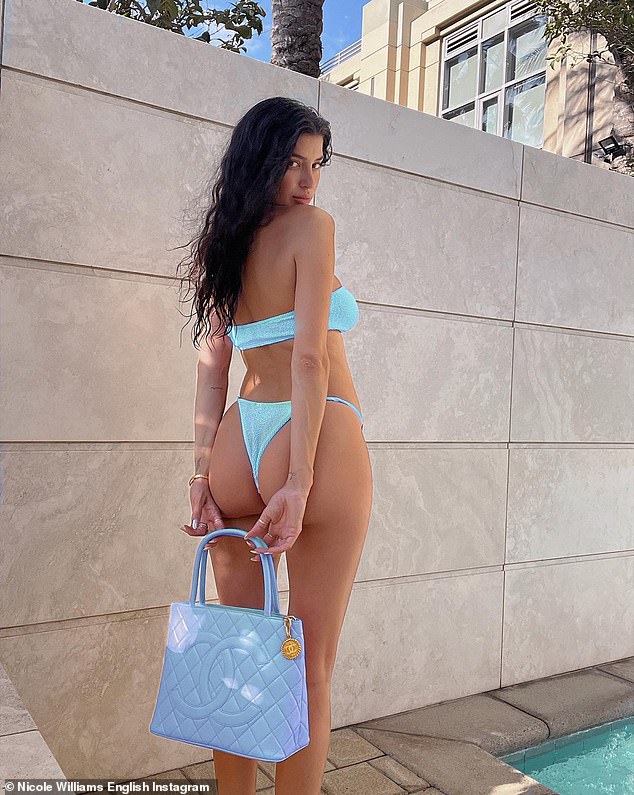 Blue but no boy: The former WAGS star posed up a storm in her blue ensemble, but despite the baby boy color she is having a girl