Nicola Sturgeon warned there were serious ‘ethical’ concerns about vaccine passports as she refused to commit to introducing them in Scotland.

After Boris Johnson announced the controversial Covid certificates would be needed for nightclubs and potentially other large events from September, the First Minister insisted any proposal ‘need to be really carefully considered’.

She also suggested yet another deviation from the path chosen by Boris Johnson in England, voicing support for vaccinating all children aged 12 and over.

The JCVI has ruled out mass vaccination of healthy children for now but has updated its advice to enable 12 to 15-year-olds with specific underlying health conditions to receive the Pfizer vaccination.

In a daily news conference this afternoon she was asked about following Mr Johnson’s lead. She replied: ‘I’ve said many times before that while there are arguments for a requiring vaccination to allow entry to certain places, it raises sensitive ethical and equity considerations – not least because there are some people who can’t get vaccinated because of health conditions and we are not yet in a position of having a recommendation to vaccinate all younger teenagers.

‘So we’ve got to weigh up these things very carefully and while we’re doing that we need to continue to be cautious.’

After Boris Johnson announced the controversial Covid certificates would be needed for nightclubs and potentially other large events from September, the First Minister insisted any proposal ‘need to be really carefully considered’. 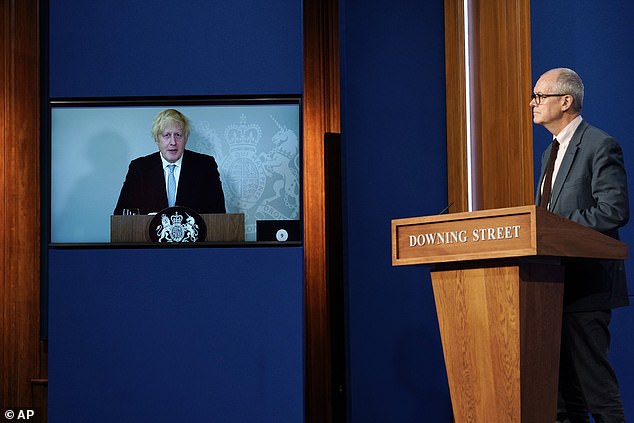 The PM faces a furious backlash from MPs and civil liberties campaigners after delivering an ultimatum to young people about the shape of the rules from September at a press briefing last night.

No10 today refused to rule out making people prove they are double-jabbed to get into pubs – as Tory rebels vowed to fight Boris Johnson’s ‘disgusting’ threat to restrict access to nightclubs.

The PM faces a furious backlash from MPs and civil liberties campaigners after delivering an ultimatum to young people about the shape of the rules from September at a press briefing last night.

And pushed on whether the prospective edict could apply to bars as well Downing Street merely said it will ‘use the coming weeks to look at the evidence’.

Tory MP Charles Walker declared he will vote against the plan if it comes to the Commons after the summer recess. ‘It will start with nightclubs and then quickly move on to other parts of the hospitality sector,’ he told BBC Radio 4’s World at One.

Another senior lockdown-sceptic told MailOnline there are ‘likely’ to be enough Tory rebels. But they stressed a revolt would be ‘pointless’ unless Labour lines up against the measures.

‘It’s all about Keir Starmer… unless Labour go through the division lobbies in opposition it will happen,’ the MP said.

Ms Sturgeon added: ‘You already see it in the debate sparked by the Prime Minister’s comments yesterday: there are people who think we should use vaccine passports to open up access as much as possible and there are other people who think that are serious equity, civil liberties and ethical issues associated with these.

‘So I understand the desire for speed on these things, but we’ve got to make sure we get this right.’

Scotland’s top doctor will write to the UK’s vaccine body, urging them to keep teenage vaccination under review.

Speaking at the coronavirus briefing in Edinburgh today, First Minister Nicola Sturgeon said she considered it ‘extremely important’ that vaccinating 12-17-year-olds is not ruled out entirely.

‘To that end, the chief medical officer is writing to the (Joint Committee on Vaccinations and Immunisations) asking that the benefit of vaccinating all 12-17-year-olds is kept under close and ongoing review and that it takes account of all available data from countries already doing this,’ the First Minister said.

The latest figures for Scotland show 13 coronavirus deaths and 1,604 new cases were recorded in the past 24 hours.

It means the death toll under this daily measure – of people who first tested positive for the virus within the previous 28 days – stands at 7,813.