Nicola Sturgeon revealed previously undisclosed messages text between her and Alex Salmond live on television today, accusing her predecessor of being ‘clearly angry with me’ for not covering up sexual harassment allegations against him.

Scotland’s First Minister made the move on Sky News this morning after being accused of withholding the WhatsApp exchanges by Mr Salmond’s legal team.

Ms Sturgeon is embroiled in the probe into how the claims against Mr Salmond – alleging he behaved inappropriately towards female staff at Edinburgh Airport – were handled by the Scottish Government.

Ex-First Minister Mr Salmond, 65, was acquitted of all charges in a court case in March.

Ms Sturgeon told Sophy Ridge on Sunday today they were ‘not a big revelation’, adding that the claims were a diversionary tactic by her ‘annoyed’ predecessor.

She acknowledged the messages did make ‘an oblique reference’ to claims of inappropriate conduct by Mr Salmond – despite saying she had already released all relevant evidence to the Holyrood investigation into the government’s botched handling of harassment allegations.

Mr Salmond’s allies accuse Miss Sturgeon of colluding against her former friend and mentor of 30 years to paint him as a sexual predator.

The explosive new allegations comeas she is using the Covid crisis to attack Boris Johnson and drive support for Scottish independence to unprecedented highs. 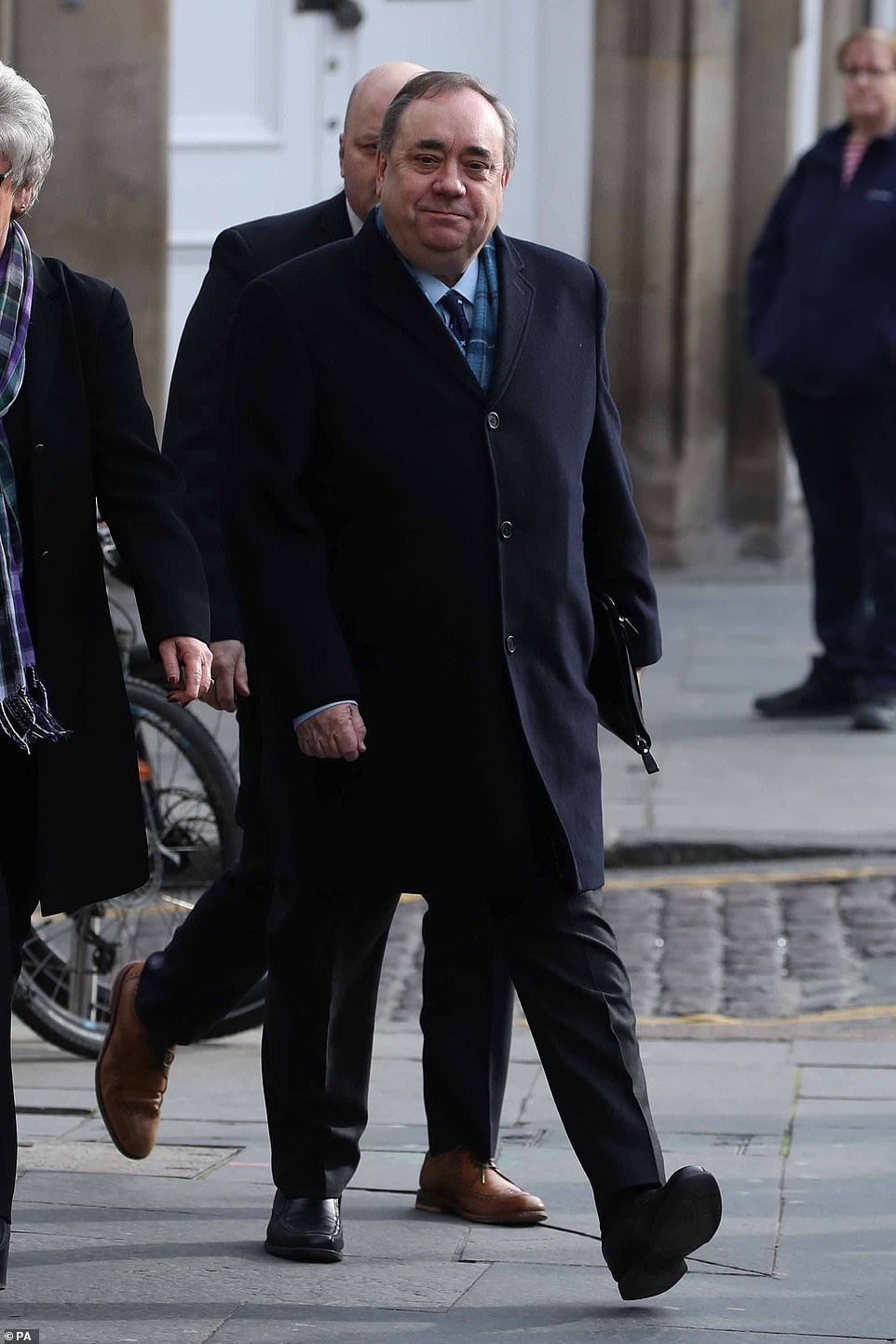 Ms Sturgeon is embroiled in the probe into how the claims against Mr Salmond – alleging he behaved inappropriately towards female staff at Edinburgh Airport – were handled by the Scottish Government. 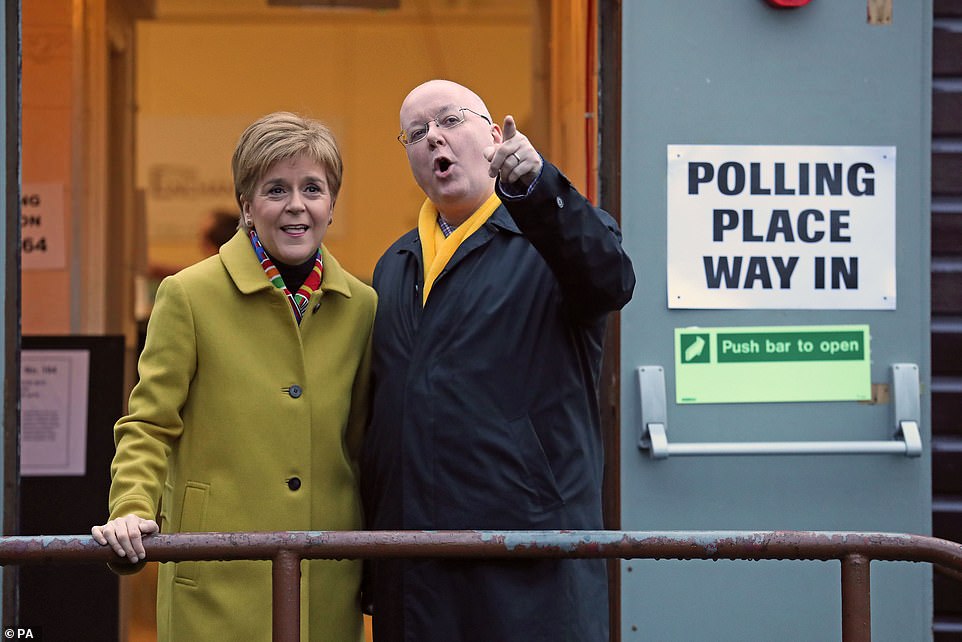 Last week Mr Salmond’s allies leapt on new evidence showing her husband, Peter Murrell, texted a senior SNP staffer saying it would be a ‘good time to be pressurising police’ just a day after he went on trial for attempted rape and indecent assault

Explainer: How Sturgeon fell out with ‘one of the biggest influences of my life’ and what prompted ‘conspiracy’ claims

This inquiry was always going to expose the growing rift between Mr Salmond and Miss Sturgeon, as well as the SNP factions which align themselves with them.

After being cleared of 13 sexual assault charges earlier this year – all of which he had strenuously denied – Mr Salmond said evidence that had not been heard in court would ‘see the light of day’.

In pre-trial hearings, his lawyer had lobbied judges for the right to present evidence about an alleged plot against him. This involved claims that key Scottish Government and civil service figures had launched a campaign against Mr Salmond, aimed at exaggerating allegations of sexual misconduct.

Miss Sturgeon’s evidence makes clear that she did play a key role in the introduction of a new harassment procedure, but she rejects any claims of ‘conspiring’ against her predecessor.

She states: ‘I have faced accusations of ‘conspiring’ against Alex Salmond and also of ‘colluding’ with him. I reject in the strongest possible terms both of these suggestions… what some want to present as ‘conspiracy’ is in actual fact my refusal to ‘collude’ or ‘cover up’.’

Miss Sturgeon insists that she did not create the new policy because she had concerns allegations about Mr Salmond could materialise and ‘nor did I, in any way, allow such concern to lead me to limit the scope of the procedure’.

She admits she was aware of a media inquiry from November 2017 about allegations of sexual misconduct against Mr Salmond – and he denied it when she spoke to him about this at the time.

However, she says the episode did leave her with a ‘lingering concern that allegations about Mr Salmond could materialise at some stage’. This will fuel concerns from the Salmond camp that the new procedure was introduced to ‘get’ the former First Minister.

Miss Sturgeon is also scathing in comments about what it was like to work with Mr Salmond, saying: ‘Mr Salmond could be challenging to work for and, rightly, he demanded high standards. However, I was present on some occasions when tense situations had to be defused.’

Challenged about the claims this morning, the First Minister offered to read out the messages she believed Mr Salmond’s lawyers were referring to.

The messages, which Ms Sturgeon said were sent during the week of November 5 2017, also suggest Mr Salmond did not tell her he was to start hosting a show on Kremlin-backed broadcaster Russia Today.

Asked about the undisclosed messages, Ms Sturgeon said: ‘Around about the time I spoke to (Mr Salmond) about the Sky News query, I sent him a message on November 5 saying, ‘Hi, when you free to speak this morning?’. He replies saying ’10am’.

‘That’s when I asked him, ‘What is this Sky thing?’

‘I go back to him later that day to say, ‘Any developments?’

‘So I was setting up a conversation that I have told the parliamentary inquiry about, it’s hardly a big revelation.

‘Later that week, incidentally, I messaged him to say, ‘No wonder you didn’t want to tell me’. That’s just after I find out that he’s agreed to host a regular show on Russia Today, and it reflects my incredulity at that decision.

‘I think his response to me then makes an oblique reference to the Sky News query, so that may be what he’s talking about.’

Pressed as to why Mr Salmond could want these messages to be released to the parliamentary inquiry into the government’s handling of harassment complaints, Ms Sturgeon suggested the former first minister may want people to believe the allegations were ‘all a big conspiracy’ to deflect from his conduct.

‘This is age-old here, that a man is accused of misconduct against women and often it’s a woman that ends up sitting answering for them,’ Ms Sturgeon said.

‘In a political sense, one of the worst things I faced was being confronted with the reality that my predecessor – my mentor of 30 years, somebody I considered a friend, closer to me than probably anybody outside my family – was facing serious allegations of sexual misconduct.

‘I didn’t collude with him to make these allegations go away and perhaps that is at the root of why he is as annoyed as he appears to be.’

Mr Salmond was acquitted of 13 charges of sexual assault, attempted rape and indecent assault at the High Court in Edinburgh in March.

The court case followed a legal battle which saw him awarded more than £500,000 when the Court of Session in Edinburgh ruled a Scottish Government investigation into his conduct was unlawful.

Last week Mr Salmond’s allies leapt on new evidence showing her husband, Peter Murrell, texted a senior SNP staffer saying it would be a ‘good time to be pressurising police’ just a day after he went on trial for attempted rape and indecent assault.

He was later cleared of all charges and successfully sued the Scottish government over its investigation into him. A judge concluded the probe had been ‘unlawful’, leading to the current inquiry into Miss Sturgeon’s conduct and whether she showed deliberate bias.

In another significant new development, Miss Sturgeon was accused of ‘misleading parliament’ after revealing she was made aware of ‘allegations of a sexual nature’ in relation to Mr Salmond days before previously claimed.

It was her branded absurd by Scottish Tory Ruth Davidson as they clashed in the Scottish parliament. 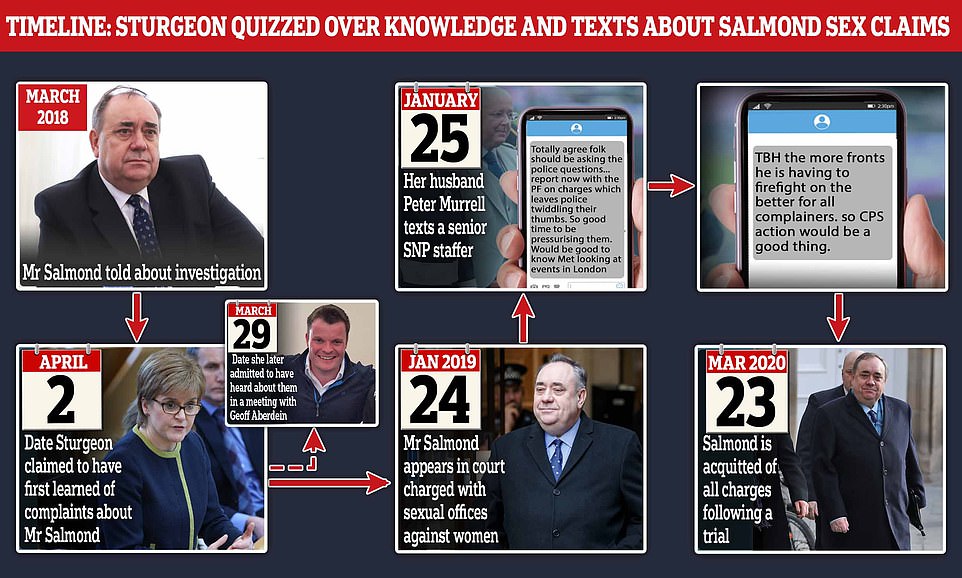 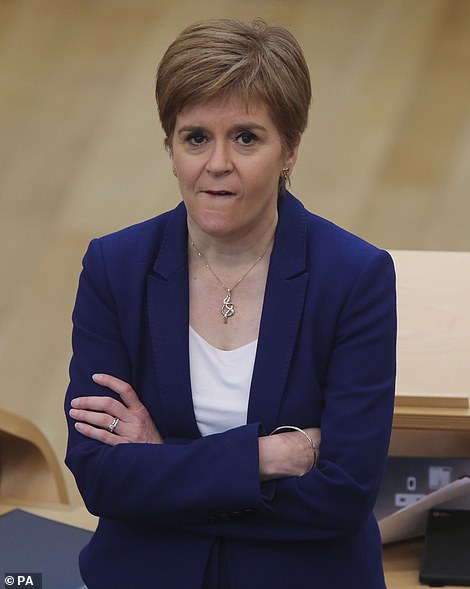 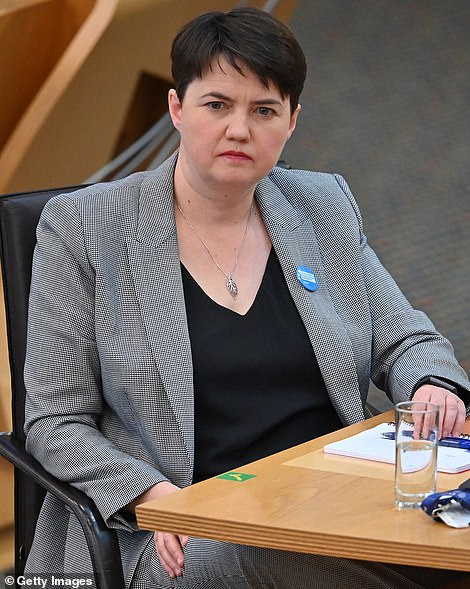 Scotland’s First Minister Nicola Sturgeon, left, insisted she has ‘nothing to hide’ after being accused of misleading the Scottish Parliament about when she first knew about allegations against him. Ruth Davidson, right, branded the First Minister’s position ‘absurd’

Ms Sturgeon was accused of ‘taking people for fools’ as she insisted she has ‘nothing to hide’  having previously said she was first made aware of complaints against her predecessor when he told her in a meeting at her home on April 2, 2018.

But it later emerged that she was informed during a meeting with Mr Salmond’s former chief of staff Geoff Aberdein on March 29 that year, three days earlier.

During First Minister’s Questions the First Minister was challenged by Tory Holyrood leader Ms Davidson on whether her claim to have simply forgotten was ‘credible’.

Ms Sturgeon said: ‘I get why people will look at that and raise an eyebrow.

‘There is something seared on my memory and it is actually the meeting that took place some three days later when Alex Salmond himself sat in my own home and gave me the details of the complaints that had been made against him and also gave me his response to aspects of those complaints.

‘That is what seared in my memory and I think most reasonable people would understand that.

‘Forgive me if that has somehow overwritten in my mind a much more fleeting, opportunistic meeting that took place a few days earlier, that is just how it is.’

But Ms Davidson replied:  ‘This isn’t a trivial matter. And what lies at the heart of this matter is whether there was an abuse of power, and an abuse of power affects every citizen of this country.

‘And I’m afraid the position of the First Minister is absurd.

‘Why did the First Minister mislead Parliament by omitting the fact that this meeting ever happened?’