Scotland will be plunged into a new national lockdown from midnight TONIGHT: Nicola Sturgeon tells Scots they must stay at home for ALL of January by LAW and keeps schools closed until at least February as she warns of ‘steeply rising’ Covid case numbers

Scotland will be plunged back into a national coronavirus lockdown from midnight this evening, Nicola Sturgeon announced this afternoon.

The SNP leader said the new crackdown, lasting all of January, will include a legally enforceable stay-at-home rule.

Exercise and essential journeys will be the only reasons why people will be allowed to leave their homes.

The planned reopening of schools on January 18 is also being pushed back to February 1 at the earliest while workers are being instructed to work from home wherever possible.

Rules on outdoor gatherings will be tightened to allow a maximum of just two people from two households to meet outdoors.

Meanwhile, places fo worship will be closed from this Friday but weddings and funerals will still be allowed to go ahead.

Ms Sturgeon said the tough new curbs are necessary because of the ‘steeply rising’ rate of infections north of the border as she warned the lockdown could be extended beyond January if necessary.

The measures effectively mean a return to the restrictions seen during the first UK-wide lockdown which was imposed at the end of March last year.

All of mainland Scotland is already placed in the highest tier of Covid-19 rules but case numbers have prompted Ms Sturgeon to take more drastic action after 2,464 new cases were announced yesterday.

The move by Ms Sturgeon will inevitably prompt speculation that England could soon be forced to follow a similar path. 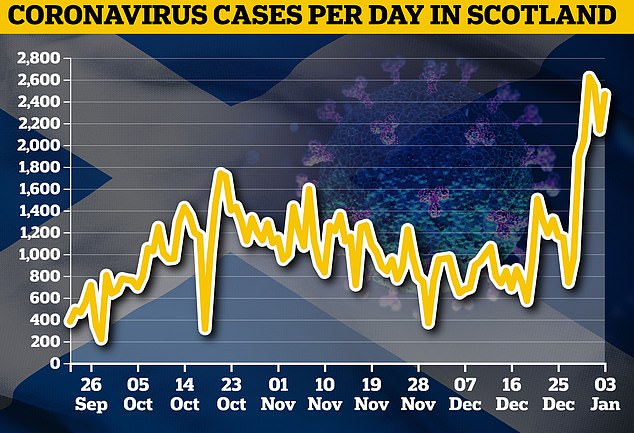 Ms Sturgeon set out the terms of the new lockdown in an address to a recalled Scottish Parliament.

It is just the fifth time ever that Holyrood has been recalled and the second time within the last four weeks after it sat on December 31 to consider Boris Johnson’s Brexit trade deal with the EU.

She said the situation facing Scotland is ‘extremely serious’ and that the spread of a mutant variant of the disease had struck a ‘massive blow’.

She warned that Scotland is seeing a ‘steeply rising trend of infections’ and that she is is ‘more concerned about the situation we face now than I have been at any time since March last year’.

She said: ‘I can confirm now in summary that we have decided to introduce from midnight tonight for the duration of January a legal requirement to stay at home, except for essential purposes.

‘This is similar to the lockdown of March last year.’ 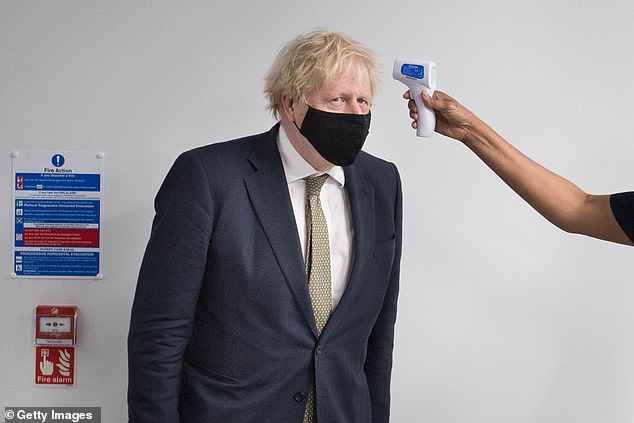 All of mainland Scotland is currently in Protection Level 4 – the highest tier in the Scottish government’s current coronavirus rules system.

All pubs and restaurants have to close apart from for takeaways and all non-essential shops must shut.

People in level 4 areas have also been told not to travel outside the boundaries of their local authority unless it is essential.