Eight people from three separate households will be able to meet indoors in Scotland from tomorrow, Nicola Sturgeon has announced.

In the latest flexing of her devolved health powers, the First Minister also stipulated that when outdoors, five different households could form gatherings of up to 15 people.

Ms Sturgeon insisted there will be a curb on meeting up with more than four households in one day – although it will not apply to anyone aged under 18.

The confusing ‘Phase 3’ regime was confirmed as Ms Sturgeon voiced ‘cautious hope and optimism’ that the virus is getting under control north of the border.

However, with more shops and services getting up and running alongside the social relaxations she also stressed it is a time of ‘real danger’, and urged people to wear facemasks and observe hand hygiene.

Speaking in the Scottish Parliament, Ms Sturgeon said there had been no new deaths from coronavirus in the last 24 hours and the R infection rate number has been between 0.6 and 0.8 for ‘most of the last month’

Speaking in the Scottish Parliament, Ms Sturgeon said there had been no new deaths from coronavirus in the last 24 hours and the R infection rate number has been between 0.6 and 0.8 for ‘most of the last month’.

The most recent estimate is that 1,000 people in Scotland are infectious, she said, and the ‘prevalence of the virus in Scotland is at this stage several times lower than it is across the UK as a whole’.

The changes mean that from tomorrow, households can meet up to two others at a time indoors, with up to eight people in total permitted, and overnight stays are allowed.

Children aged 11 and under will no longer have to socially distance from other youngsters or adults indoors or out – but older children and adults must continue to keep apart.

By contrast in England, two households can meet indoors or outdoors with no limit on numbers – although there is a general maximum of 30 on social gatherings – and there is no restriction on how many households you can see in a day.

From Monday, children can enjoy contact sports and shopping centres can fully reopen.

On Wednesday July 15, hairdressers, indoor pubs and restaurants can all restart business, and museums and galleries can open their doors once again.

On the same day, places of worship can reopen for communal prayer, congregational services and contemplation – but with restrictions on numbers, singing and chanting.

The First Minister said: ‘We should all savour our first indoor meetings and meals with friends, our first pint in a pub or catch up over coffee. Many of us are looking forward to our first non-amateur haircut in months.

‘And there will be other milestones and reunions that we will enjoy over the next few weeks. They have been hard earned by each and every one of us.’

But she also stated: ‘I have a duty to be crystal clear with the country that this is also a time of real danger.

‘Next week represents the most substantial easing of lockdown so far.

‘We know that meeting people indoors poses far greater risks than going to a park or to someone’s garden.’ 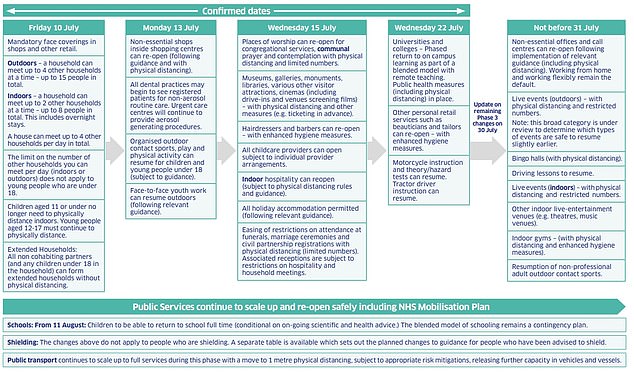 In response, Scottish Conservative leader Jackson Carlaw referenced Chancellor Rishi Sunak’s mini-Budget aimed at boosting the economy as he called on the Scottish Government to be more ambitious.

Mr Carlaw said: ‘What Scotland is now looking for is prompt, radical and ambitious action from this Government to support our tourism industry, to keep young people in jobs, and to rebuild our country.’

The First Minister welcomed the Chancellor’s latest measures ‘as far as they go’.

She also said: ‘The most important thing this Government needs to do for our tourism sector, for our economy, for society generally and frankly for every individual in the country, is to provide the most sustainable basis for the recovery from the Covid crisis.

‘Right now Scotland is being successful in tackling and suppressing this virus – perhaps more than is the case elsewhere in the UK.’