Finsbury Growth and Income’s period of pain is not letting up as fund manager Nick Train blamed ‘annoying’ price falls among its top holdings last month.

The Lindsell Train co-founder, who has managed Finsbury Growth & Income for 20 years, recently apologised to investors for Finsbury’s ‘disappointing returns’.

In May, the investment company continued to underperform the benchmark FTSE All-Share which was up 0.7 per cent.

Finsbury’s NAV per share total return was down 3.7 per cent and its share price was down 4.3 per cent.

Three of its biggest positions, in drinks giant Diageo, London Stock Exchange Group and analytics firm RELX, were all down between 6 and 8 per cent in May ‘for no discernible reason so far as we can judge.’

Train added: ‘Of course, I acknowledge, the backdrop for all equity markets is unpropitious today. But I might hope that predictable, cash-generative businesses, like this trio would’ve been havens in uncertain times.’

Train adopts a bottom-up stock picking approach and has a preference for companies with high margins, dependable profitability and low levels of debt which can generate high returns.

The fund’s biggest faller in percentage terms was Fever-Tree, which was down 15 per cent in May.

Train said Fever-Tree’s ‘position as the number one premium mixer brand seems as clear and exciting as ever’. And while the stock is 60 per cent below its 2018 peak, he will ‘buy more into this weakness’. 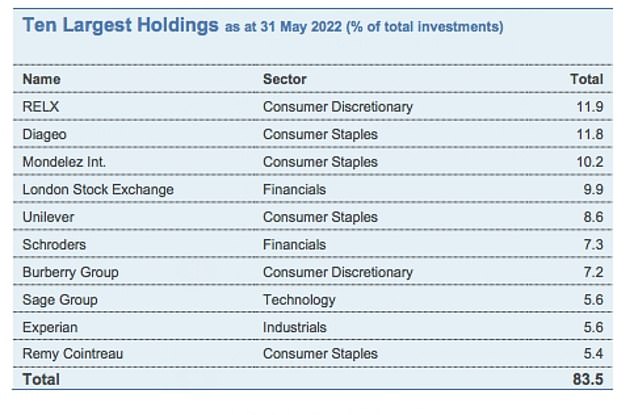 Sage and Experian were also a drag on the trust’s performance in May. Experian dipped nearly 5 per cent after publishing its full-year results, despite announcing a 10 per cent dividend increase.

‘There are not many companies quoted on the London stock market where one might realistically hope for sustained annual 10 per cent growth in free cash flow.

‘But Experian is one of the few we know where such an outlook is not outlandish.

‘We have been adding steadily to the Experian holding through 2021/22 and it is now a meaningful portfolio position.

‘Let’s hope our buying has been conducted at prices that will look like bargains in 5 years’ time.’

He added: ‘Before I go and kick the cat – someone has to pay for these frustrations – I will cheer myself by noting a couple of holdings in the portfolio that had a better month.’

Despite difficult conditions for its current sales in China, Burberry was up more than seven per cent on its final results.

An 11 per cent dividend increase and a new share buyback were well received by investors. 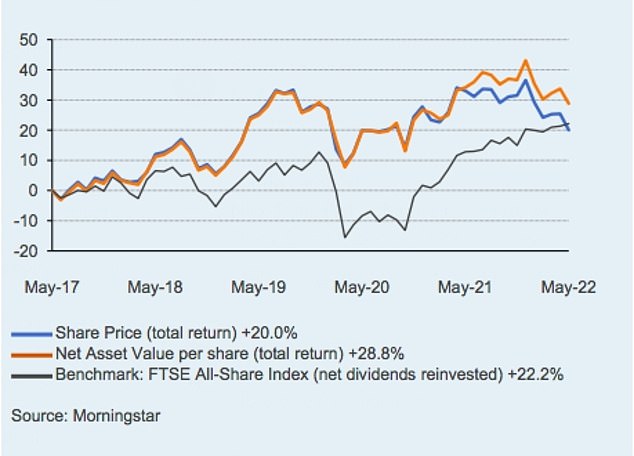 Finsbury Growth & Income has suffered after its initial pandemic rebound

Train said: ‘Here is another board that believes its shares are undervalued and that little investor recognition has been afforded its work in elevating the luxury status of the Burberry brand.’

The appointment of activist investor Nelson Peltz to Unilever’s board as a non-executive director also saw shares rally ‘as UK investors recall how his presence on Cadbury’s share register led to a break-up and eventual sale of that company.’