There was a touching farewell at the RAC Club in Pall Mall, London, to a much-loved and well-respected motor industry boss who really has put his own money where his mouth is.

Industry chiefs, union leaders, journalists and academics turned out to wish him ‘iechydda’ as the Welsh toast goes.

The president of General Motors Europe, Nick Reilly, is retiring

Educated at Harrow and St Catherine’s, Cambridge, and a passionate Welsh rugby supporter, he became disillusioned with stockbroking.

So he went up a mountain to live as a hermit for four months to find himself, before switching to the motor industry, where he swiftly scaled the greasy pole.

In 1998, he gave up a year’s salary of £160,000 in return for Vauxhall’s 10,000 workers limiting their pay increases in a bid to help safeguard two of the firm’s threatened British plants.

His farewell came as a question mark again hangs over Vauxhall’s Ellesmere Port plant because of huge parent company loses.

‘On your bike,’ says Boris Johnson

‘On your bike’ was London Mayor Boris Johnson’s message to Olympic ‘fat cats’ when I caught up with him and the Transport Secretary Justine Greening. They were launching the Get Ahead of the Games website – getaheadofthegames.com – to help the public avoid the expected travel chaos.

Johnson urged what he termed fat-cat Olympic VIPs to cycle to sports venues, rather than be chauffeured in an exclusive fleet of ‘green’ BMW limousines in 30 miles of reserved, congestion-free ‘Games Lanes’, part of a wider 109-mile Olympic Route Network.

But London Olympics chief Lord Coe was not amused, justifying the Olympic lanes as ‘a godsend’ vital to ensure athletes get to the Games on time.

Open wide – then wider. That’s the idea, thanks to the sliding doors of Ford’s new B-Max (pictured).

The ‘baby’ multi-purpose vehicle’s two sliding rear doors mean that, with the front doors open, the whole side area is one big space, dispensing with the traditional central ‘B’ pillar.

The B-Max, a rival to Vauxhall’s open-space Meriva, goes on sale in Britain in September from around £12,500. A spokesman says: ‘Production demanded a new approach to door construction with the centre pillars integrated into the doors themselves.’ 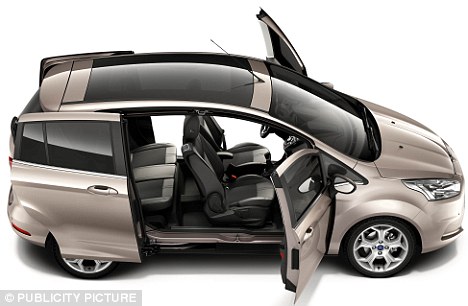 Ford’s B-Max goes on sale in Britain in September from around £12,500

The 1.5 metre-wide, unobstructed openings on both sides are about twice the width of conventionally designed car doors.

‘It makes loading bulky items, or helping children in and out of the car in tight spaces, a breeze, as well as delivering excellent crash protection,’ says a spokesman. The rear seats and front passenger seat can also be folded flat to create a large platform.

Such is the importance of the model to the company that it’s to be unveiled at next month’s Geneva Motor Show by its global chief executive Alan Mulally.

I love the idea of the half-mile long ‘clutter-free’ street at newly refurbished Exhibition Road in the heart of Kensington, London’s museum quarter.

Signs and barriers have been ripped out to help motorists and pedestrians co-exist more harmoniously. I wonder if the designer Sir Jeremy Dixon, of leading architects DixonJones, could pop round to my place and sort out my office?

Meanwhile BMW has unveiled the design of its special ‘floating’ sponsor’s pavilion at the Olympic village. The 800sqm glass-and-steel structure with a curtain of cascading water is to be built on an elevated site above the Waterworks River, between the Olympic Stadium and the Aquatics Centre.

With sporty BMWs on show on the top deck, it’ll be the nearest to motorsport you’ll get during the Games. 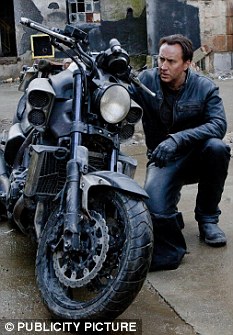 Nicolas Cage with the Yamaha VMAX

Here’s a beast and a half – and the motorbike’s pretty sinister looking, too.

The Yamaha VMAX has a starring role in Nicolas Cage’s latest film, Ghost Rider: Spirit Of Vengeance, in cinemas next Friday and based on the Marvel Comics series.

But much of the more extreme riding is done by British stunt man Rick English – rickenglish.co.uk.

He is shooting the new Bond film Skyfall, having worked on the Harry Potter films, Inception, Captain America and the Dark Knight Rises. Cage describes English as ‘a mystic on a motorcycle, an acrobat … a poet on two wheels’.