Nick Kyrgios has once again made of a mockery of the rankings and blown the US Open wide open with a rollicking fourth-round win over world No.1 and defending champion Daniil Medvedev – and he is sure to win praise for his classy post-match speech on centre court.

In an explosive encounter laced with controversy and drama, Kyrgios risked being defaulted and overcame a running verbal battle with the chair umpire before ousting the top seed 7-6 (13-11) 3-6 6-3 6-2 on Sunday night.

It was the Wimbledon runner-up’s second defeat of Medvedev in three weeks and vaulted Kyrgios into the quarter-finals at Flushing Meadows for the first time.

After getting the crowd offside with a trademark run-in with officials early in the win, the Aussie was applauded for his classy remarks just after taking match point – especially his heartfelt tribute to girlfriend Costeen Hatzi. 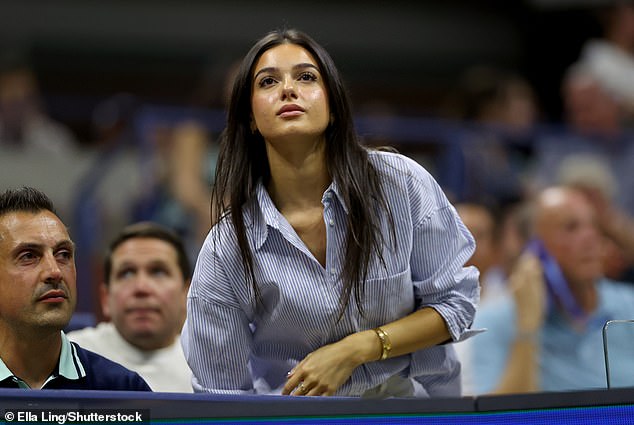 ‘It was an amazing match, Daniil is the defending champion and he would have had a lot of pressure on his shoulders,’ he said.

‘But the way I have been playing has been amazing the last few months.

‘I am just working hard every day, making every practice session count. Getting to sleep, I would probably be out every night before.

‘I have a great girlfriend, she helps me. My team, my physio, all of my team.

‘I am really happy and hopefully I can keep it going. I want to go all the way, hopefully it is possible.’

At last realising his rich potential, the 27-year-old will play another Russian, Karen Khachanov, for a semi-final berth on Tuesday (Wednesday AEST). 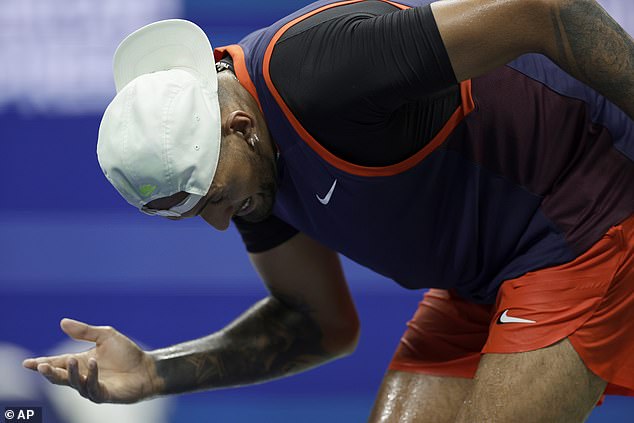 Now three wins away from breaking his grand slam title duck, Kyrgios was imperious at times.

He received a standing ovation from the Arthur Ashe Stadium crowd after winning a pulsating opening set that stretched more than hour.

Other times, he flirted with disaster.

He looked to have thrown away the first set after giving up a 4-2 lead and then a 4-1 advantage in the tiebreaker, not to mention threatening to hit the self-destruct button and engaging in an unnecessary, elongated exchange with Greek umpire Eva Asderaki-Moore.

The combustible Canberran lambasted Asderaki-Moore for starting the shot clock apparently too early. 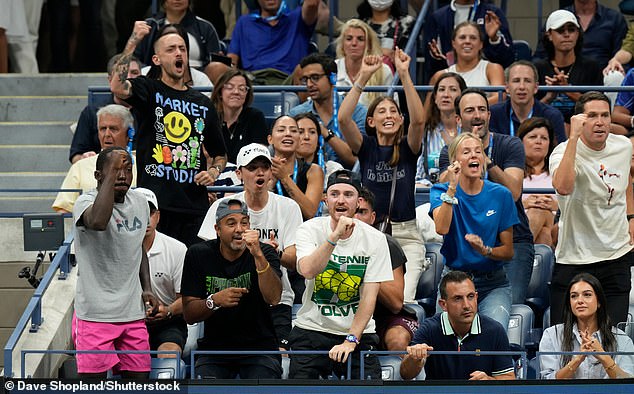 After screaming at his support crew (pictured in the front row, with Costeen Hatzi far right) in his second-round match, Kyrgios had nothing but praise for them after his immense win 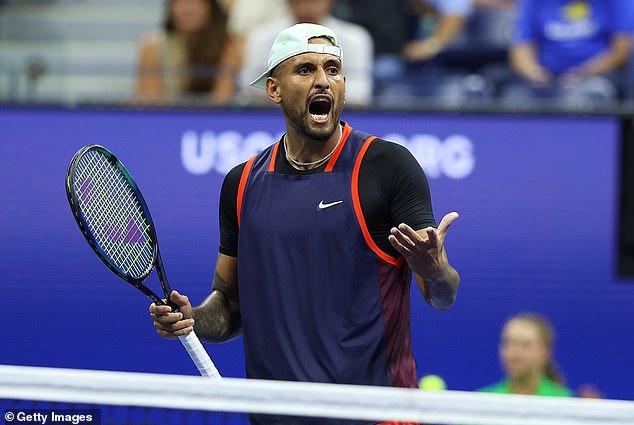 ‘You are the only umpire that I’ve a problem in this matter,’ Kyrgios fired at her.

‘Use your common sense. Just use it a little bit.’

But, after regaining his cool and fighting off three set points, Kyrgios brought up a fourth of his own with an exquisite backhand drop shot that almost spun back over onto his side of the net.

It was probably the shot of the entire match and he duly nabbed the set when Medvedev sent a forehand wide after 63 minutes of quality tennis.

But it wasn’t long before tensions really boiled over.

Medvedev fumed at the umpire for not warning Kyrgios after the Australian, frustrated at going down an early break in the second set, went within centimetres of hitting a ball into the first row of the stands, and likely a spectator.

Medvedev then threatened to quit if someone from Kyrgios’s courtside entourage wasn’t ejected for disrupting the top seed between his first and second serves.

‘They cannot do it,’ Medvedev raged.

‘If they do it a second time, I am not playing they’re out, until somebody is out.’ 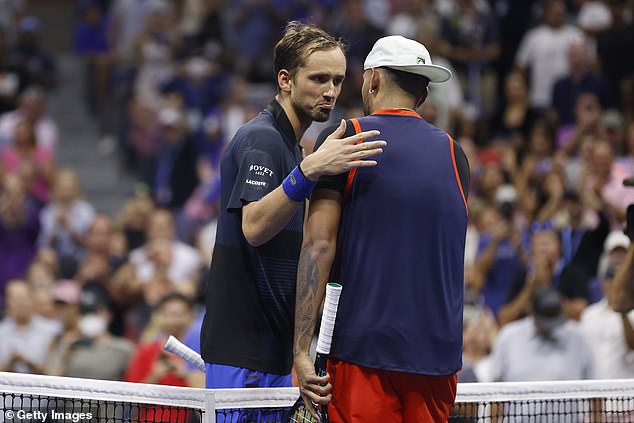 The victory over Medvedev (pictured together straight after match point) thrusts the Aussie into a quarter final on Wednesday morning, Australian time

After levelling the match at a set apiece, Medvedev received an extraordinary, possibly unprecedented, gift from Kyrgios.

After looking to have earned a break point in the second game of the third set, when Medvedev couldn’t return a ball, Kyrgios ran around the net celebrating and hit the ball away for a mock winner.

Quite rightly, though, Asderaki-Moore awarded the point to Medvedev because the Russian’s shot, while clearly not going over the net, was ‘still in play’.

‘I thought it was legal,’ Kyrgios said, shaking off the blunder, somewhat uncharacteristically, before breaking Medvedev on his next service game to claim a 3-1 lead, then going on to seize a two-sets-to-one lead.

Kyrgios turned the screws with another break in the third game of the fourth set, then received an audible obscenity the following game.

But it didn’t matter as Kyrgios snared a double break and powered to a 20th victory in his past 23 matches after two hours and 53 minutes.