Vanquished Wimbledon star Nick Kyrgios is set to swap tennis rackets for Caribbean sunsets as he takes a break from the sport following his loss to Novak Djokovic.

But before he does, the polarising Aussie was sure to post one last parting shot at his detractors on Instagram.

Kyrgios has posted ‘bye Wimbledon, next stop Bahamas’ as he plans on taking a holiday, likely with his girlfriend Costeen Hatzi.

But before that, he posted a cryptic video of NBA star Kevin Durant that has since been deleted.

The video was from 2019 when Durant had spent a long period not talking to journalists because he felt they were putting words in his mouth.

Fronting the press for an official media commitment, Durant fired up at reporters.

‘I just don’t trust none of y’all,’ Durant said.

‘Every time I say something it gets twisted up and thrown up and so many different publications tried to tear me down with my words that I say.

‘So when I don’t say nothing, it’s a problem.

‘I just wanna play ball. I wanna go to the gym and go home.’

While Kyrgios made history as an unseeded player surging his way to a Grand Slam final, he was shadowed by controversy the whole way.

Kyrgios routinely flouted the All England Club’s all-white dress code and wore a bright red basketball cap and shoes before and after matches – including when he received the runner-up plate from the Duchess of Cambridge.

‘It’s more attention for me. What’s that saying? Any publicity is good publicity, right?’ he said in an exchange with a British journalist.

He was fined $10,000 USD for spitting toward a fan that was heckling him during a fiery match against world No.5 Stefanos Tsitsipas.

Kyrgios was also fined $4000 USD for swearing in front of the royal box in the final, including eight-year-old Prince George.

It meant that while Kyrgios had a mountain of support, he also had a tidal wave of detractors slamming him for his behaviour. 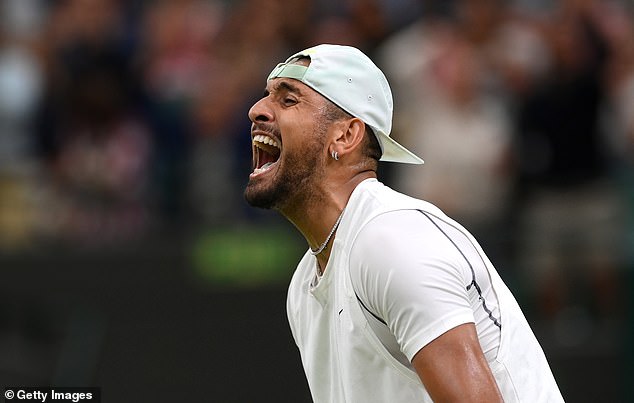 Earlier in the tournament, he issued a response to his ‘haters’.

‘I just smile. It’s so funny. I joke around with my team about it so much. It’s hilarious.

‘I almost just wake up and read things, and I just laugh. And I never forget things people say, whether it was three, four years ago, things that just stick with me.

‘I have a massive chip on my shoulder. I sit here now … and I just know there’s so many people that are so upset.’