‘I do what I want’: Aussie bad boy Nick Kyrgios is defiant after flouting Wimbledon’s all-white dress code by wearing a red cap and trainers before and after his last-16 win, as he insists ‘any publicity is good publicity’

Nick Kyrgios told Wimbledon’s rule makers ‘I do what I want’ after flouting their all-white dress code before and after his fourth-round victory over Brandon Nakashima.

The Australian walked on to Centre Court wearing red trainers, then changed into them again, along with a red cap, once he had completed his five-set win against the American.

Kyrgios has already been fined twice this tournament and is now likely to receive another ticking off for breaching rules which state white must be worn ‘from the point at which the player enters the court surround’. 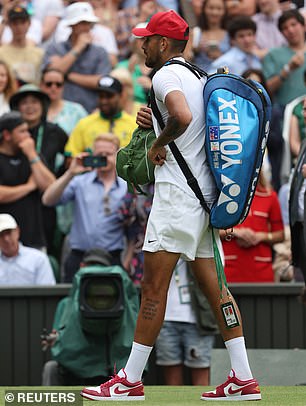 But asked about his latest transgression, the defiant world No 40 said: ‘I do what I want. I’m not above the rules, I just like wearing my Jordans (trainers).

‘It’s more attention for me. What’s that saying? Any publicity is good publicity, right?

‘I sit here now in the quarter-finals of Wimbledon again and I just know there’s so many people that are so upset. It’s a good feeling.’

On the court, Kyrgios was more subdued than in Saturday’s fiery clash with Stefano Tsitsipas, when he berated the umpire for not defaulting his Greek opponent after hitting a ball into the crowd.

The 27-year-old will meet unseeded Chilean Cristian Garin on Wednesday in his first Wimbledon quarter-final since his debut here as a 19-year-old in 2014, when he famously knocked out then world No1 Rafael Nadal in the fourth round. 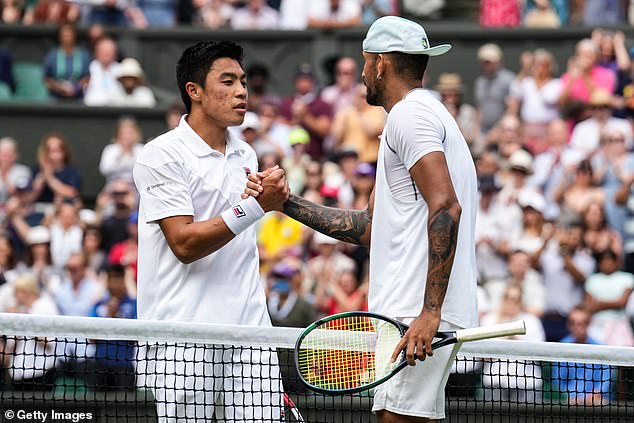 ‘I stepped out here against one of the greatest of all time and beat Nadal,’ he recalled. ‘These are all things I have in the back of my mind.

‘I feel like I’ve been around for a long time. I feel comfortable here. I feel like a bit of a veteran.

‘I was telling people back home that I wanted to go for the title this year round. But now I’m not thinking about lifting a trophy or making semi-finals or making the final. I’m just trying to stay in the moment.’

Despite the controversy that has followed Kyrgios in recent days, he believes he has ‘a long way’ since the ‘darkest period’ of his life in 2019, when he battled depression and alcohol and drug abuse. 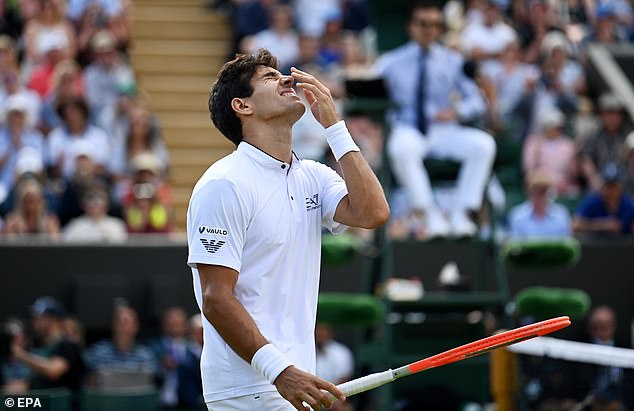 That year, Kyrgios was spotted in Wimbledon’s Dog and Fox pub the night before he played Nadal in the second round on Centre Court, a match he lost in four sets.

‘There was a time where I was having to be forced out of a pub at 4am to play Nadal second round,’ he said. ‘My agent had to come get me out before I played my match on Centre Court.

‘I’ve come a long way. I’ve just got so many people around me, they just support me. I feel like I can reflect on all those dark times when I pushed them all away.

‘Now, to sit here quarter-finals of Wimbledon, feeling good, feeling composed, feeling mature, having that around me, I’m extremely blessed.’

Kyrgios, who has never reached the semi-finals of a Grand Slam, is set to meet Nadal again in the last four if they both win their quarter-finals. 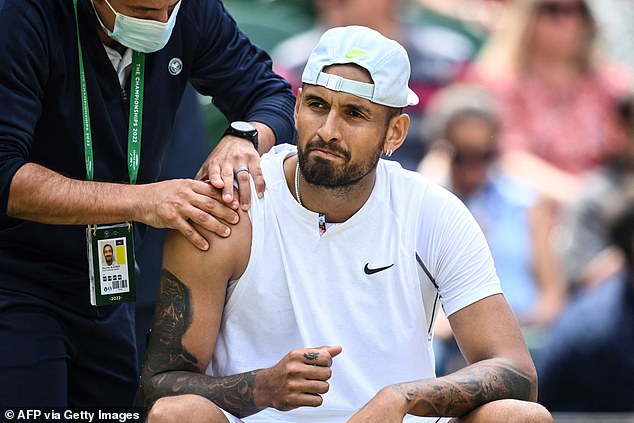 And he has played down fears his Wimbledon chances will be derailed by a shoulder injury, which required medical attention during the third set against 20-year-old Nakashima.

‘I woke up after Tsitsipas and had some shoulder pain,’ he explained. ‘I’ve played so much tennis in the last month and a half, so I almost knew that it was time for my body to start feeling some niggles.

‘I think that’s normal. At this time in the event, I don’t think anyone is feeling 100 per cent. It’s just something I manage.

‘Mentally I feel like I just deal with these things a lot better now. But I need a glass of wine tonight, for sure.’